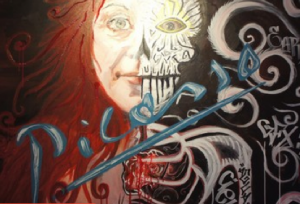 Culturemap attended the opening of alleged Menil vandal Uriel Landeros’ solo show Houston We Have a Problem and reported  “as far as art openings go, the party was memorable . . . right down to the free forties (liquor bottles), the particularly good DJ, the off-duty police officers and the man wearing a gigantic basket on his head.” The artist’s video presence was there, via Skype, and many of his paintings had been  painted on by local street artists (presumably with permission), improving them significantly.

Ironically, the Menil Collection, owners of Picasso’s Woman in a Red Armchair, the target of Landeros’ alleged felonious acts, will be featuring one of Mel Chin’s recent “unauthorized collaborations” in which the renowned artist, no stranger to controversy himself, cuts into other artist’s works’ to make them his own, as part of their 25th anniversary celebration! 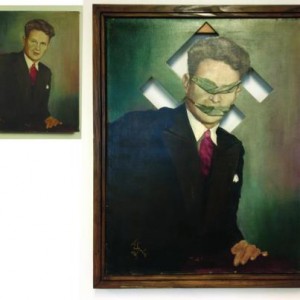 Chin’s collaborative act “pertains to the Fall 1939 Invasion of Poland.”

Do you consider Wayne White’s paintings to be defaced art or some early Mark Flood paintings? How do consider the difference between altering a piece of art an individual owns as opposed one belonging to someone else?

Wayne White paints over mass-produced reproductions, so the issue of defacement doesn’t come up. Certainly someone who alters works they own, like myself or Mark Flood, or Mel Chin is on safer legal ground than a vandal, at least in Texas; some other countries, and I think California, have laws regarding artist’s moral rights that might apply.

I think the interesting issue, though, is status. Lowering an artwork’s status is defacement, raising it is appropriation.

Here’s a story to illustrate:

Being known as someone who keeps a lot of old, fairly worthless paintings around, a curator asked me if I had any portraits for Chin to work with- I sent photos of some, including an old piece by Houston artist Earl Staley. The Staley portrait was disqualified as unsuitable, because its artist was known and recognized, protected from alteration by its status.

The Uriel Landeros incident mixes property issues and status issues. The legal crimes with which he is charged have nothing to do with either the artistic merit of Picasso, or the merit of Landeros as an artist; the police are after him for allegedly damaging valuable private property; that’s all.

The outrage, however, mostly expressed by the artworld, not the police, is not over the property damage (which has, after all, been repaired) , but over the violation of the pecking order: a low-status artist altering a high status work. Anarchy!

I don’t think it is pecking order, the outrage is – or should be – over trying to use a derivative, uninformed action to add undue weight to uninformed work.
it is tough to make a case for work that lacks both originality as well as quality.

But I still agree with Bill that is a status issue. If Uriel Landeros had gone into the Salvation Army and painted “conquista” on an anonymous thrift-store painting, it would have been a fruitless gesture, netting him no infamy. In order to become infamous, he had to choose a high-status object to tag.

(Ironically, if he hadn’t become infamous, there would have been no point for James Perez to invite people to tag Landeros’ paintings. Because who would have cared, except for Landeros?)

Sure status is involved, especially on Landeros’ end, but it shouldn’t be source of irritation.

“Pablo Picasso was never called an asshole”. But I guess that Uriel Landeros didn’t get the message.

To me this ridiculous controversy is simple: if Senor Landeros had really intended to produce an artistic statement, he would have stood by it, literally, and not ran away like a total coward. Also, I understand that art is subjective but seriously, have you seen this guy’s attempts at art? He is painting eyeballs and peyote flowers like a 16 year old stoner. Also, he has tribal tatoos all over his shoulder.

Mel chin is a faux Uriel at this point. Funny I burned “the artist ego “tonight ” …literally . Had so much fun doing it.

The difference between Uriel Landeros and Tony shfazi is Uriel is free to practice his art form and didn’t turn a trick and turn himself in. Time will tell… This is his art form ,destruction as the act of creation itself is the basis of gaphitti itself .Ever been so wrong you’re right?

I think I’ve said everything I need to. Let’s all agree to drop this retarded subject. Can we all agree to stop? Thank you everyone.