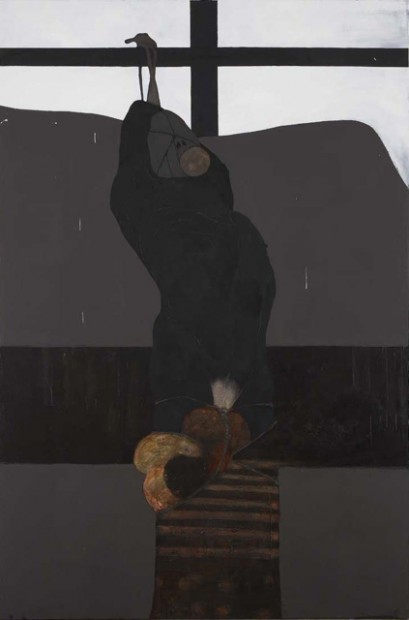 (for the Part I interview with Hilary Harnischfeger, click here.)

Husband and wife Tommy White and Hilary Harnischfeger are currently featured at Front Gallery (brainchild of artist Sharon Engelstein and her artist husband Aaron Parazette). While at first their work appears quite divergent due to their respective media (Harnischfeger: ceramic constructions, White: oil paintings), Front Gallery highlights the artists’ shared sense of process, a heavily-worked aesthetic, and an embrace of the sensual.

Houston-raised Harnischfeger earned a BFA from the University of Houston, 2001, and an MFA from Columbia University, 2003, and in 2007 was awarded the Marie Walsh Sharpe Foundation Space program award. Exhibited nationally and internationally, she is represented by Rachel Uffner Gallery in New York.

White received his BFA from the Hartford Art School, 1992, and his MFA from the Massachusetts College of Art, 1996. A recipient of a Guggenheim Fellowship, a New York Foundation for the Arts Fellowship, and the Robert Rauschenberg Foundation Award, he is represented by Harris Lieberman Gallery in New York.

Harnischfeger and White live in Brooklyn and Granville, Ohio, where they teach at Denison University. On the occasion of the Front Gallery exhibition, they sat down with Elliott Zooey Martin to discuss their work.

Elliot Zooey Martin : You identify yourself as a painter, primarily. Can you talk about the relationship between these drawings and your paintings?

I did a bunch of photo-based drawings years ago.  I took pictures of my sculpture and then I cropped the photograph with sign enamel. Subsequently I’ve taken pictures of my paintings in process and then cut them up and used them in the drawings.

EZM: But the photographs are always referencing your own work? 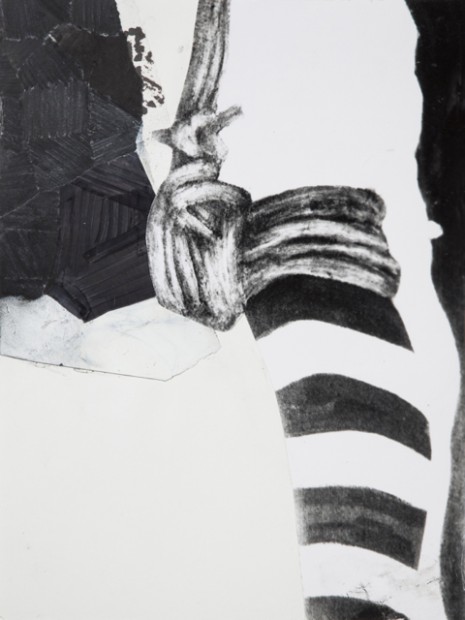 EZM: So it’s sort of like the writers block exercise freewriting?

TW: Yes—just to be working, making sure I’m working. There’s a lot of opportunity to procrastinate when you’re alone all day in the studio. When I find myself sitting in the chair looking at the marks on the wall and not doing anything, I tend to go back to smaller drawings.

EZM: Do any of these sheets relate to specific paintings?

TW: That one, it’s a skull vomiting, I have a painting that started with a similar image. A lot of the imagery is like a made up vocabulary that gets used in all the work so there are a lot of similarities in that sense.

EZM: Painter’s drawings are often classified as working drawings—drawings for a painting, or where a specific idea is thought out—or as autonomous drawings in and of themselves, finished works of art. These seem to be neither.

TW: They are finished, they may be a bit raw or even ugly, but I seem them as finished works. I stopped working on each of them, stopped being curious about what else they could become, so for me that’s finished – the same way the paintings get finished.

But my expectations are, I guess different in the drawings then the paintings. Drawings afford a freedom that I can’t or am not yet interested in finding in my paintings. It’s easier to stop. There’s less pressure. In a way, my expectations are lower. I don’t worry as much — though I still worry. 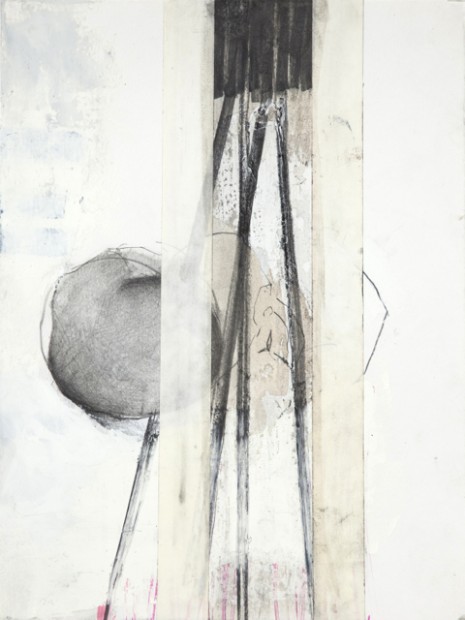 EZM: At the same time, these drawings are heavily worked.

TW:  I think my process is very much about always wanting more out of whatever I’m making, wanting it to be better. I am interested in overworking things more than I am interested in stopping too early. If I am still curious about what I could do with the picture, about where it could go. I am inclined to just keep going.

I’ve gotten criticism over the years that my paintings and drawings are overworked. But I see that as the point. I’m comfortable with my pictures feeling like they lost a fight – that they got beat up.  Its what happened.

EZM: In terms of art historical references, there seems to be a Surrealist approach to the body.

TW: I’ve been drawn to a lot of the Surrealist, especially Bellmer, since I was young. Those influences definitely gave me the freedom to do whatever I wanted with the body.

EZM: I was thinking about this toe-genitalia transmutation.

TW: There is a lot of transmutation in the pictures. I’ve actually stopped using so much of the feet imagery. There’s obviously a sexuality to my work, although not a healthy one, and I didn’t like they way the feet started to read as to specific a fetish.

EZM: Can you expand on what you mean by a not healthy sexuality?

TW: I mean that these drawings are more about the body and what it conceals, than sex.

EZM: Let’s talk about the text you’ve incorporated. Here you’ve collaged a table of contents onto the drawing.

TW: That was from a magazine about enemas, I thought it was sort of funny. I have a lot of reference material floating around the studio that sometimes finds its way into the work. Over the years, whenever I need to see a body or body part, I’ve hired models, taking pictures of friends, and collected pornographic magazines to help me see what I need.

For years I’ve written on my paintings and drawings, but mostly I cross it out. Recently I’ve been leaving legible text in the work. 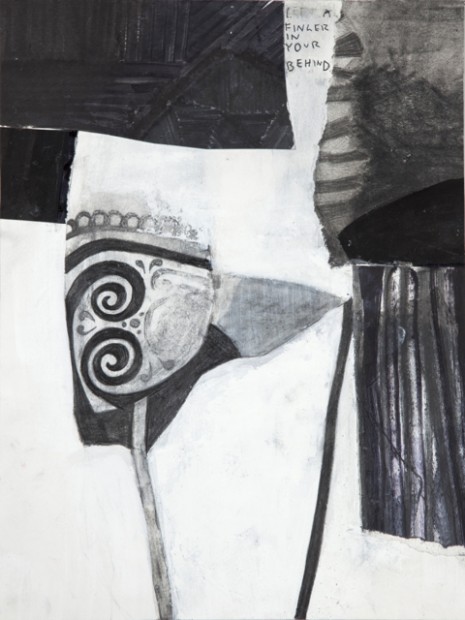 EZM: Can you talk about this erasure through overlay?

For instance, this drawing is a guy wearing a pair of lady’s underpants. We have been spending all this time in a small town in Ohio and there’s this one cross dresser. In New York, I would not have thought twice about him. But in this small town where everyone, at least on the outside, seems to be so similar he just looked so radical, it seemed so brave to me. I went home the next day and was thinking about him and I started this drawing, then maybe I didn’t like it so I added this detail of a lace stocking, then covered up half of that with paint, then some marker seeped through the paint, and so on, and that’s the end result.

I don’t think anyone would ever know that’s what this drawing started out about. It’s a good example of how most of the drawings and paintings work—a moment and thinking about something and drawing it and realizing it looks too much like that and then burying it and seeing what it becomes.

EZM: It’s funny, you have such a dark palette and then all this pink.

TW: It’s like with the text — the text can be seen as a note of humor amidst all this darkness. I think there’s something about the pink that is funny. I’m not interested in having the work be dark and ugly all the time. There are moments that are funny; there are moments that are tragic and sad, and moments that are lighthearted. Overall, there might be something slightly morose or dark or base about the work. But I certainly think that’s not all that’s there. I think there is beauty, humor, and vulnerability in the work as well.  I guess my hope is that visually and conceptually the work is complicated – like life.

Elliott Zooey Martin is a curator and writer living in Houston.