Dallas Arts District Inter-Fest Fest: Get a GLIMPSE of Next Year’s AURORA on OCT 19 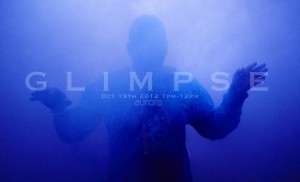 The Dallas Arts District has announced  a few details of GLIMPSE 2012; a night of light, video, sound, installation and free public art intended as a preview of AURORA 2013, and featuring 10 of the 100+ artists expected to participate in next year’s event. Glimpse 2012 is is set for October 19, from 7pm to midnight. Flora Street will be closed to traffic between Routh and Jack Evans to become a pedestrian walk-way of art and food trucks, with art installations on the grounds of the Dallas City Performance Hall, the Winspear Opera House and Booker T. Washington High School.

The event’s co-creator, Shane Pennington, said that Aurora was going Biennial, with major events every other year, alternating with mini-previews like this one. “After last year’s success, not to mention hard work, we decided that we would move in the direction of a biennial. We want to keep the vision fresh, while simultaneously working on our fundraising prospects to encourage growth. We want time to court several international artists to be a part of this very unique experience.”