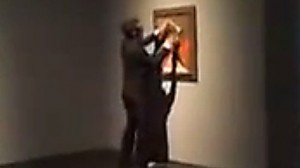 The announcement of an upcoming exhibition featuring the work of artist Uriel Landeros, infamous for allegedly defacing a Picasso painting at the Menil Collection last summer, has sparked a Facebook furor, and a split-up between the partners at the gallery where the show is to be held. James Art Gallery (formerly CuetoJames, but partner Rafael Cueto reportedly split from the gallery over the show), in Houston’s Summer Street Studios announced the show, titled “Houston, We Have a Problem” and opening on October 26 from 7-11 pm, on Facebook, where it immediately elicited an endless stream of negative comments, interspersed with defiant proclamations from the remaining gallery owner James Perez. Recent posts have all been video links- blogger Robert Boyd has sifted out some of the meatier parts of the initial spiteful outpourings.

I would stop giving him publicity, but I’m addicted to publicity myself! That post in two days has generated a huge number of page-views, with links from Hyperallergic, CultureMap, Swamplot, and Glasstire. Unfortuntely, the publics desire for news about Uriel Landeros greatly outweighs its hunger for cerebral reviews of Eric Zimmerman, unfortunately.

Sorry about the redundant “unfortunately”–what can I say–it’s double unfortunate.

The defacers of today are lame, 6th carbon copies of something that was interesting a long time ago (see Rauchenberg’s erased De Kooning).

That said, one could make the argument that the impulse that caused Pussy Riot to explicitly critique a church inside a church is similar to the impulse to deface a painting inside a museum. I guess it comes down to whether the critique is a successful one. In this case (and at the Tate Modern, see Bill’s previous news post), it’s not.

His art needs to better than Picasso to really get anywhere. It isn’t. I hope the gallerist at least arrested and questioned.

Why should the gallerist be arrested? Unless he was an accomplice to Landeros in the defacing, I don’t see that he has done anything illegal. (He has been a jackass online, but that isn’t a crime yet.)

Well, he obviously knows where Landeros is!

“His art needs to better than Picasso to really get anywhere.”

I disagree. Also, “better than Picasso” is kind of a weak platform. It’s like saying “better than sex.” Sex, while generally on the enjoyable side, can also be pretty bad.

Furthermore, I prefer that defacers be strongly against whatever it is they’re spraying or scribbling on. These over-emotional romantic rationalizations for defacing art are crap. If you’re going to ruin it, then ruin it for real.

I like defacers who are theatrically crazy and not careerists self-promoters.

To my mind, there hasn’t really been anything interesting in art vandalism since this guy:

What about Carmen Lucette Tisch?

Oh right, the ol’ punch, butt-rub and pee. Yes, there was that 🙂

I can see stupid, pointless defacement as a valid artistic gesture: look no further than Culturecide’s CD “Souvenirs of Pre-Revolutionary America”, in which Mark Flood gleefully voices over commercial pop songs, also illegally. I see the problem more in practical terms: if vandals make it impractical for institutions like the Menil to display their works, they won’t, and we’ll all be poorer.

Poverty is as good a point to start as any; if whether or not good or bad art is an issue there are other circumstances inexorably involved, that art as a frontier is not a license to transgress genre without recourse, that harming people or ones self physically, or worse, harming others in a willfully and intentional way is not necessarily part of artistic agency and can be judged on moral grounds. The low hanging fruit syndrome appeals to the worm in all of us and is fascinating to the degree of revulsion we choose to entertain, present company included.

The show is at Summer St. not Spring. At least per the invite. Uriel faces two felonies. Would he get the community service sentence he deserves or mandatory incarceration? I honestly hope he has means for quality counsel or otherwise, frankly, evades arrest. I’m angry too but the pitchforks and torches have moved me more towards pity. The shirtless antics never stop in this town. I need a gym membership.

The show is indeed at Summer St. Winter, Spring, Summer- too many streets with studio complexes named after seasons in this town. Sorry.

Personally I think it a gross misuse of self-expression to deface a work of art in a Museum and use the arrest / fame / whiny baby bullshit to promote your own art career, which results in an art exhibition. But then again, I’m wasting five minutes posting my opinion about the topic. Maybe Landeros is smarter than everyone thinks, or maybe he’s just really dumb, and played his cards right, whatever cards he has left play before he goes to jail. Won’t be attending the opening at Summer/Spring/Winter Street.