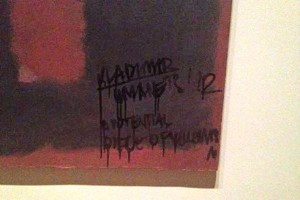 London’s Metropolitan Police Art Squad is investigating an incident at the Tate Modern in which a man scrawled words in black ink in a corner of Rothko’s Black on Maroon (1958). The new inscription read “”Vladimir Umanets, a potential piece of yellowism,” and sure enough, Vladimir Umanets, founder of the movement, told the BBC he was responsible for the defacement, had added value to the painting by signing it, and was surprised he had not been arrested immediately (he was arrested yesterday). Internet furor results, with opinion divided between predictable extremes: some want to break Umanets’ kneecaps, some Rothko’s.

UPDATE 10/12: Blogger Marina Galperina of Animal New York tracked down the other Yellowist, Marcin Lodyga, in Berlin for an interview, eliciting an only somewhat incoherent elucidation of the Yellowist theories and ideas that may have motivated the other half of the two-man art movement to vandalize a Marc Rothko painting at the Tate Modern last week.