On Art, Economic Impact, and the Dark Side of Free Market Capitalism

1. Amid the brouhaha following Paul Schimmel’s departure from MoCA this summer, Eli Broad was quoted in the LA Times as estimating the value of MoCA’s exhibits by the cost per attendee:

Total cost of exhibition ÷  Number of attendees  =   cost per attendee

Broad complained that some of MoCA’s shows had cost over $100 per visitor:

“In today’s economic environment, museums must be fiscally prudent and creative in presenting cost-effective, visually stimulating exhibitions that attract a broad audience.”

In short, museums are a business, and their business is maximizing “art” impact. 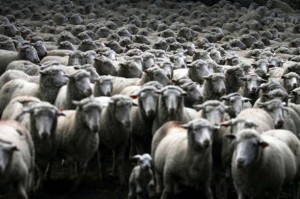 2. This week hundreds of Houstonians attended a luncheon sponsored by the Houston Arts Alliance to announce the results of a study of the economic impact of the arts on Houston. The numbers about jobs and dollars of impact on Harris County’s economy are big, which should come as no surprise.

It should not be a surprise because these types of studies have been going on for decades now, and they invariably have the same result (“$$ Huge Art Impact on the Local Economy!!! $$”). Americans for the Arts, the advocacy group that authored this study as well as hundreds of others around the country, has been running the numbers on the arts for over two decades. The Texas Cultural Trust generated similar studies in 2001, 2008, 2009, 2010 and 2011. Farther afield, studies have been going on since the 1980s by the World Commission on Development, the President’s Committee on the Arts and the Humanities, and other groups.

Why the preoccupation with the economic impact of the arts? As far back as 1987, one economist suggested that “more money has been spent on assessments of the impact of the arts than on any other arts policy question.”1 This is a tragedy, when one considers the same effort could be going towards long-term studies about the effects of art education, or on artists’ effects on neighborhoods, or on crucial intangibles—like how happy the arts make us. (Yes, things that aren’t money can also be quantified.)

In a paper arguing against these kind of studies, Christopher Madden writes:

‘Economic’ impact studies allow comparisons to be made between, say, an art gallery, a casino and weapons trade, without distinguishing between the intrinsic, functional aspects of such diverse options…. The practice is unconvincing in advocacy and of little value generally.”

In short, these studies are not effective. Arts funding in Texas is at an all-time low, with the Texas Commission on the Arts’ budget cut in half last year, only barely escaping an effort by Governor Perry to eliminate it altogether. The National Endowment for the Arts’ 2012 budget is $146 million, still $30 million lower than its peak in 1992. If these studies were successful, we would be seeing more government support for the arts, not less.

Presumably Americans for the Arts would rejoinder that the drop in government support would be so much worse without the existence of these expensive studies that they produce, to which I argue that the arts “industry” needs to get more creative in its advocacy, if advocate it must. I would start by asking some smart artists for their ideas. 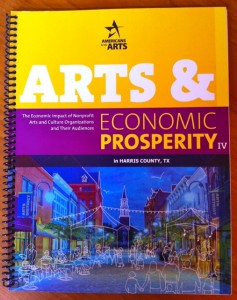 They might want to start by hiring a graphic designer who doesn’t produce something that looks like this.

3. In an op/ed in the New York Times, the conservative columnist David Brooks writes:

There are few people on the conservative side who’d be willing to raise taxes on the affluent to fund mobility programs for the working class. There are very few willing to use government to actively intervene in chaotic neighborhoods, even when 40 percent of American kids are born out of wedlock. There are very few Republicans who protest against a House Republican budget proposal that cuts domestic discretionary spending to absurdly low levels.

The Republican Party… appeals to people as potential business owners, but not as parents, neighbors and citizens.”2

When every aspect of civic life must be boiled down to a number with a dollar sign attached to it, we’ve lost our way. There’s a reason the Founding Fathers substituted “pursuit of happiness” for “property” in the Declaration of Independence.

Art is important. But the reason it’s important is not because of the number of dollars audiences spend on it. Just like good citizenship is important, but not because it can increase one’s personal wealth.

I’ve been seeing studies like the one HAA/AFA just published since the late 1990s. And where have they gotten us? To a point where a museum exhibition is defined as successful based on the number of dollars spent per person who saw it.

2. (BTW, it’s worth noting that the Democratic party is equally culpable in the monetization of public life.)

The saving grace of the art-as-a-business engine concept is that it has largely failed. Imagine if people began investing real money in art-related ventures designed for personal profit or, more altruistically, for economic development? There are a few examples of this, both in the for-profit and non-profit sectors- today’s news tells of the Houston Endowment putting $6 million into the MATCH project, using arts orgs as the hub of a hoped for Midtown renaissance.

If MATCH is intended to spark a “renaissance ” in Midtown, they’re late for the party.

A couple of weeks ago, I spoke up about wanting to attend the Fort Worth City Council meetings where the proposed cut to arts funding was to be decided. I wimped out and didn’t speak to Council, and yes, they cut funding. I wimped out because I knew that they were going to cut funding. That decision had already been made, and the esteemed speakers that went in front of Council to talk about the economic impact weren’t going to make a difference. I could have gone to tell them about impact art has had on my life, about the way the arts in Fort Worth have directly contributed to my life as an artist (and decent human being), to the fact that what I have to contribute to my community is art – service through art. I do a lot of it. I wimped out because I knew that I was going to be disappointed, and I’m also disappointed in myself for wimping out. So, maybe this just helps to clear my chest – this all sucks.

The study indeed is linking an economic value to the non-for profit arts scene in Houston, but it is also putting focus on how engaged the community is in the local arts sending a strong signal of the “quality of life” value the arts add to Houston.

The arts were a significant contributor to Houston being hailed as the coolest city in the US. We need to build on this momentum. The Art Survey can help us stay focused on one significant value driving the Coolness factor and Quality of Life in Houston.

I do hope the City leadership including City Council and Mayors offices are paying close attention to the survey result, not just from an election point of view but also understanding how significant and important Houston’s Arts Community is to make this city desirable ongoing. The survey result must be used to promote the Arts and the City more, putting Houston on the map as an art destination.

Jed Perl of all people:

“There are surely reasons to link art to education, to tourism, to urban renewal, but all such efforts will be stop-gap measures, bound ultimately to fail, unless they are grounded in an insistence on the products of the imagination as having their own laws and logic.”

A few others have commented on this topic recently.

The great Ben Davis: “Why You Should be Suspicious of the Creative Economy”
https://news.artnet.com/art-world/creative-economy-numbers-new-york-330374

Here’s David Brooks last week in the NYT, in a piece mostly about beauty:
“For some reason many artists prefer to descend to the level of us pundits. Abandoning their natural turf, the depths of emotion, symbol, myth and the inner life, they decided that relevance meant naked partisan stance-taking in the outer world (often in ignorance of the complexity of the evidence). Meanwhile, how many times have you heard advocates lobby for arts funding on the grounds that it’s good for economic development? In fact, artists have their biggest social impact when they achieve it obliquely.”
http://www.nytimes.com/2016/01/15/opinion/when-beauty-strikes.html