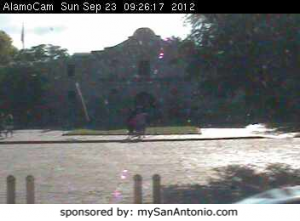 The first $25,000 Local Filmmakers Grant from the San Antonio Film Commission has been awarded to the feature-length family drama “Champion,” Directed by Kevin and Robin Nations and shot at the Land Heritage Institute on the south side of San Antonio. Actor Lance Henriksen, who has “played a lot of good guys and bad guys” stars Henriksen as a farmer whose relationship with his granddaughter is strengthen when she begins to train his cattle dog for an agility competition. He was interviewed about the film and his new role as a comic actor in the SA Current.

A selection panel of five motion picture experts from Texas and California reviewed eight applications for artistic and production excellence, commercial viability, and financial position to select the film. The San Antonio Local Filmmakers Grant program was designed specifically to assist local producers, directors, and writers to move their projects from the development stage to the production stage. Each applicant was required to submit proof of at least $25,000 in funding commitments and a letter of intent from a distributor. The new grant program is a collaboration between the City of San Antonio Office of Cultural Affairs (OCA) and the San Antonio Film Commission, which was most recently a division of the Convention & Visitors Bureau.