This morning, I went to an intro to meditation workshop held at Shambhala Center Los Angeles. I woke up early to go! To a meditation workshop! it felt vaguely like I was going to church except the Shambhala Center is in a sort of Zen late midcentury low-slung combination office residential compound in tasteful weathered wood and not the uncharming Vatican II-era suburban Catholic Church where I went I worshipped as a kid, and that shall remain naveless (nyuk).

I’ve taken up meditation recently for all the standard reasons. I want to handle stress without resorting to chemical means. I aim to become a more compassionate and open person. Experts say it’s good for your brains and immune system and what have you. I intend to forgo profanity completely.* I aspire to be less invested in indignation as my go-to outlook. 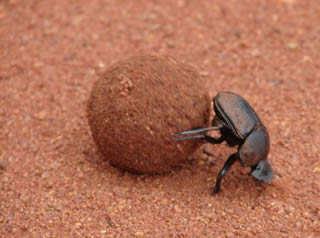 Trying to let go of that poop ball, you guys.

Since preadolescence, a primary source of my motivation has been outrage. I’m pissed off for reasons of social injustice and personal limitations, I’ve been angry at my country, angry at the myriad ways Texas can make an ass of itself, I’m angry that I’m poor, that all the people who are this poor and worse are this poor and worse, angry at the aspects of human endeavor are deemed worthy of crazy financial reward, angry that the undereducated are being taken advantage of by the crapulous, I’m angry at myself for not doing more. Plus I listened to a ot of music like this growing up:

And I travelled around South Texas this winter, where I talked to lots of people and looked at lots of art, and I took in all this incredible promise, but ran across the good ol’ boy network that’s ruled South Texas for 100 + years, still in charge. And how do you write about that in all the scornful detail you feel without  adding burdens to artists and educators and heads of nonprofits who are already-besieged, and who aren’t white-old-boy-network folks — i.e., those who ought to be running the arts infrastructure down there? And why is San Antonio and South Texas not on the cultural map to the degree they (we) should be, again? So the racism thing is STILL a THING?? And the…ALL THAT SHIT??

There are plenty of reasons to be angry, and more reasons all the time.

But I’m not kidding — I’m endeavoring  to calm down, grow up and choose to be more optimistic, because as I’m getting older, the toll it takes on me to remain as vigilant and as pissed  as I’ve been for as long as I’ve been doesn’t accomplish anything. And it’s just not fun anymore.

So too this Spring, Adam Yauch died. 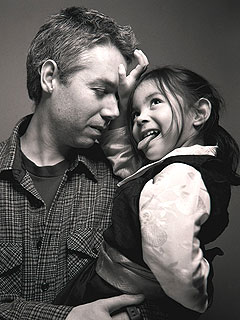 And like most of my friends, I was shocked and sad, and a little afraid , even, all out of proportion to what I thought I’d feel about a pop musician. It was public knowledge that he was sick, and had been for a couple of years. Some of what’s so raw about his passing is that he didn’t self destruct. It was just cancer. It wasn’t heroin, or a helicopter crash, or an assassination, or David Foster Wallace’s slow and caustic emptying-out of hope. Cancer got MCA. And he’d made a good adulthood for himself, and had, (despite embracing Buddhism? could it actually be in part because of embracing Buddhism…?), gone on to make challenging work and to help other people make good art, too. He hadn’t gone on to be a post-art producing lifestyle celebrity or cause merchant or a pundit. He was the anti-Ted Nugent. I feel like his existence helped to offset Ted Nugent. I could not feel that way about Amy Winehouse, bless her heart.

This MCA- produced documentary about basketball in Harlem is really good by the way and easy to find and watch online:

So based somewhat on a dead Beastie Boy’s example — is that pretentious? I’m 41. So what — I got interested in meditation, and Buddhism, and how to go about middle and hopefully old age with greater grace and without that patina of self-pity that the aging and angry seem to have, all over their writing, their faces, their tattoos. Sometimes the anger stance continues to work, but more often it doesn’t. And you can still project your curmudgeonliness without… I’m fumbling here… like, Maurice Sendak was plenty grouchy, but nobody grouchy to the core produces a Really Rosie much less Where The Wild Things Are.

MCA must have made peace with his mortality, right? He must have found ways to address what made him angry without tearing himself up, right? To make art that isn’t fueled by a very ’90s-style disdain for everything, right?

Just after Yauch died, and coincidentally a family member became quickly and seriously ill, I watched this, too, and started reading books about meditation and various Buddhist tradions and started meditating, bit by bit occasional bit. And I felt some relief. Like, 20 seconds here, a minute and a half there. 20 seconds of meditation-induced relief can feel pretty powerful really. I am not evangelizing you. I’m not even doing a particularly solid job of evangelizing me. But after relocating to Los Angeles three and a half weeks ago to go to grad school at The University of Southern California, it occurred to me that I could actually go to a place and talk to people who follow various for-real traditions. I chose this place because it’s the same, what, brand (?) of Buddhism that TV’s Pema Chodron is in. 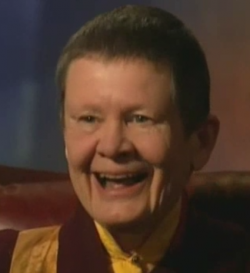 Because I like my spiritual teachers to resemble Judi Dench as closely as possible.

So this morning, I went and sat in a room of about twelve strangers, and sat on the floor on a dark blue cushion, and a very nice woman named Cynthia, who seemed really cool and normal and didn’t mention Burning Man or anything, presided over a ten-minute meditation. She tapped a gong to begin. First, I felt like the cushion thingy was too high, putting me at a weird angle. We were supposed to be breathing, which I was doing, but we were also supposed ot be returning our attention again and again to the breath, which I kept not doing.  Then my back hurt a little. Then I adjusted the waistband of my jeans. Then one of my feet started to go to sleep, or I thought it was, because I was looking at it. I didn’t know what to focus my eyes on.We were supposed to keep our eyes open, which I’ve never done while meditating before, and  Cynthia had suggested looking about two to three feet in front of us on the floor, which in my case was my left foot. I felt guilty because I a. generally feel guilty and b. don’t even know why. Like I was ruining the whole meditation for everybody by being there.

So after ten minutes, Cynthia tapped the gong again, and opened up the floor to questions and discussion. One nice-looking fortyish bespectacled smallish guy in yoga gear, kinda, said it had been very nice and quiet, and made the “namaste hands” and seemed really cool and sincere about it — was really cool and sincere I about it, I’m going to assume.

I said that I had trouble with it, that I was cranky and uncomfortable and self-conscious. Cynthia nodded. She said it was good that I noticed that. Sometimes noticing stuff is the best you can do. She sounded sympathetic. Another woman admitted to having trouble getting into a state of focus, and another noted that she often feels she has to go through a rewinding process of getting all her grocery lists and stuff before she can concentrate on breathing. This was good to hear. This was nice, actually. I felt less as though I’d been wasting time and playing at something I had no business doing. I’ve had myriad moments like this in my three-ish weeks in California. People being pretty straightforward and nice and explaining things pretty well, and being able to take it in pretty simply. I’ll be doing many, many other posts wherein the LA stereotype rears its collagenic head, but not this one. There are some good manners in California that make it hard not to like. I felt simple gratitude that Cynthia didn’t give me any advice.

Then a woman behind me said that she had a miracle happen to her. That in her mind she could envision her body expand and contract with each breath, and that unbidden, her soul in her mind emerged as an open mouth, and with each inbreath angels came to pour streams of liquid gold into the mouth of her soul and purify her whole being.

What have I done?

I close this post with this photo I found online because I really love it. 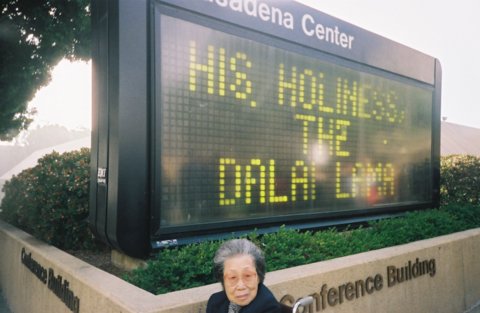 During my mid-40s I began to have panic attacks—I suppose decades of angst were taking a toll. I read a few books on meditation and began to practice. My experience was close to yours—I felt self-indulgent…I felt like a phony…sometimes it was nice and quiet but mostly it was boring. I decided a nap would be just as good, and I wouldn’t have to focus on any guilt or anxiety. I guess enlightenment just isn’t for me. My panic episodes faded away, but as my 50th birthday approaches, I often wake to Peggy Lee’s “Is That All There Is?” playing in my head. I’ve stopped searching for inner peace. Now I’m searching for something that makes me feel more alive (skydiving?…no).

Enjoyed your piece. Look forward to reading more about your journey. Namaste.

Touching, truthful, self-searching, topped with some sarcasm and humor…Loved it & very well done! Both creative and realistic portraying the struggle so many of us face within ourselves. Enjoy your pieces and look forward to those in the future!

Thanks so much for your comments, Russell and Shelly. Made a hard day better.