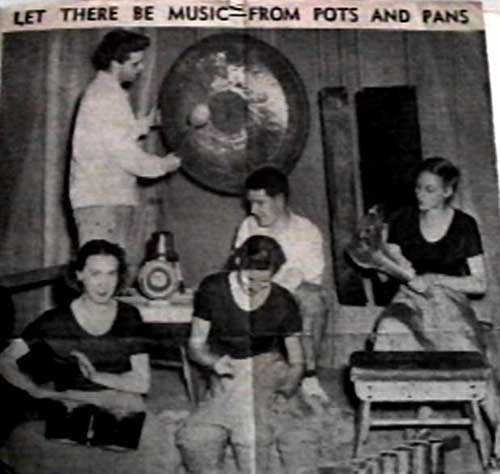 There’s been a lot of writing on John Cage in the last week in preparation for today, what would have been his 100th birthday. You can read about his influence in the New Yorker blog here, or you can read about his bohemian life in LA in the LA Times here, and here NPR discusses Cage’s uncanny ability to reveal the beauty in dumb, ordinary things. I would add that his work is about simplicity and directness; the way he made living seem so obviously practical and artful. On the first day of every class I always introduce my students to Cage’s Some Rules for Teachers and Students. Rule Nine seems the most Cageian to me: “RULE NINE: Be happy whenever you can manage it. Enjoy yourself. It’s lighter than you think.”

To celebrate my major art hero and all around crush for forever, I offer these videos of Cage talking about his work (sometimes performing). Enjoy, it’s lighter than you think.

This is Cage’s 1960 presentation of Water Walk on the popular game show I’ve Got a Secret. The audience roars in laughter as the list of items he will use as instrumentation scrolls across the screen: “Water pitcher, an iron pipe, a goose call, a bottle of wine, a whistle, radios.” The host admits while gesturing to the audience, “These are nice people, but some of them will laugh. Is that all right?” Cage responds smiling, “Of course, I consider laughter preferable to tears.”

In this clip from 1991, Cage describes his understanding of sound: “When I talk about music, it finally comes to people’s mind that I’m talking about sound that doesn’t mean anything. It’s not inner, it’s just outer… .I love sounds just the way they are. I don’t want it to be psychological. I just want it to be a sound.” Quoting the philosopher Kant he states that there are only two things in life that don’t have to involve meaning: music and laughter. Then he laughs, “They don’t have to mean anything, that is, in order to give us deep pleasure.”

This video is an interview that was conducted by the Walker Art Center in 1981 with Cage and his long time partner and collaborator Merce Cunningham. Cage says of time and its relationship to music and dance: “It is more like the weather than like an object. In an object you can tell where the boundaries are but in the weather it’s impossible to say when something begins or ends.”

This is a video documenting Cage preparing for his 1982 Speech Radios piece. He gives notes to one performer, “Try not to miss this part. On the other hand,” he laughs, “You’ll be the only one who knows you missed it.”

Last but certainly not least is Cage strumming a cacti with a feather on Nam June Paik’s tevee show.

A  series of love letters Cage penned to Pauline Schindler from the mid 1930s were recently published online. Cage wrote with urgency: “These distinctions are important now. Everything is important. Equalities distinctions writing them out and emphasizing them.” And in another letter: “Life has been hectic and the sky beautifully cloud-filled, sunlight and then beautiful shower-baths. Palm-trees and acacias in bloom and all sorts of things I took for granted for too long. I feel bristling with spontaneity: I love you.”

Everything is important. He signs a letter, “All the love in the world and more.”

A Mycological Foray: A New Look at John...

John Cage is the best and this is a wonderful post, but I need to point out that the ‘rules for teachers’ should be attributed to Sister Corita Kent, explained here:

Thanks Robin for pointing that out. I love Sister Corita too!