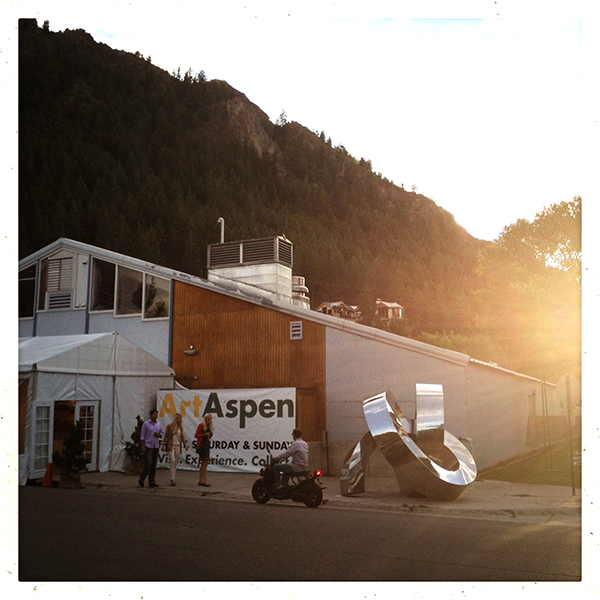 After visiting James Surls and two outdoor fairs (one local and one commercially organized) in part 1, it was time to hit the big wig affair at the Aspen Ice Garden — the third annual Art Aspen preview party. Organized by the Hamptons Expo Group (which also does ArtHamptons and the new Houston Fine Art Fair), the proceeds for the preview party benefited Anderson Ranch Arts Center in Snowmass, where we visited earlier that day and saw a talk by Rashid Johnson.

It was kind of odd to see Johnson introduced as a “post-black” artist. The notion perhaps came from his Wikipedia entry, which he immediately dismissed, saying as he started  “whoever wrote my Wikipedia entry is totally wrong.” (Note to the author of Rashid Johnson’s Wikipedia entry – think about a revision maybe?) Johnson talked about growing up in an upper middle-class household in Evanston, IL and working from an intellectual mindset after Kara Walker (who gave a talk at the Ranch a week earlier) but his work didn’t hold back from confronting a misunderstanding about the dubious term “post-black.”  It’s humorously studied and visually conscious. You can check it out here.

Later in August talks would also be presented by Jessica Stockholder and Nick Cave (not the Bad Seed) who will be showing at AMOA/Arthouse this fall, both of which I hate to miss. The Ranch is balanced with local artist auctions and lectures, a children’s workshop and various studio instruction spaces in addition to hosting cutting edge artists. It’s a place to spend thoughtful time in any capacity. 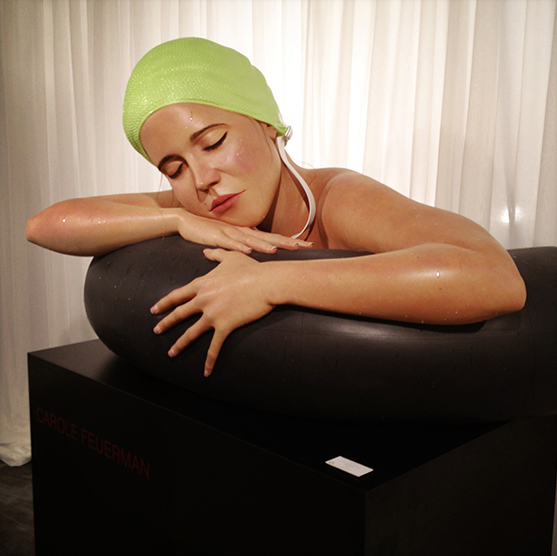 Walking into Art Aspen, the first piece on view (thoughtfully placed next to the bar) was this giant female swimmer taking a nap by Carole Feuerman (Timothy Yarger Fine Art, Beverly Hills). I thought again of Colorado Olympian Missy Franklin by happenstance, and Alex Katz”s The Green Cap (in the Walker Collection) but also Ron Mueck’s show at the Fort Worth Modern (Mueck was much more visceral.) She had a couple of smaller ones as well — all young sleepy ladies covered with water droplets. I found myself staring, knowing for sure her eyes were just about to open.  It might be cooler if they did, like once every ten days. 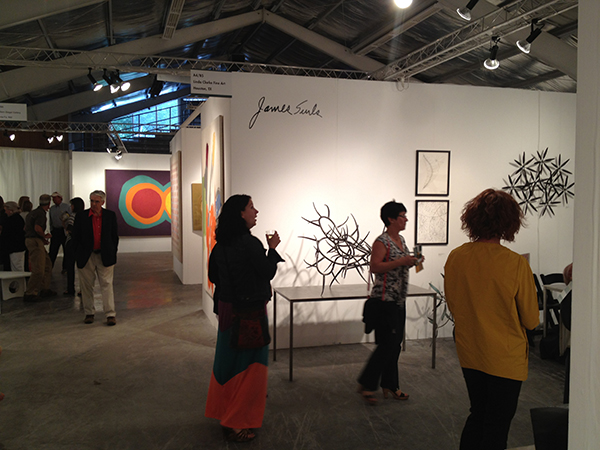 James Surls was set up in a double booth (appropriately) and if you read the article about how he’s sort of shifting the artist/gallery tradition, it’s also worth mentioning the conversation about artists representing themselves vs. gallery representation at fairs. Though Surls is represented by Linda Clarke (Houston), Surls was the only artist with work in the space, and he visited with everyone who passed through. It was certainly a more personal experience while following the rules of the art fair, but it was further evidence of Surls smartly blurring the boundaries of the system to his home-court advantage. 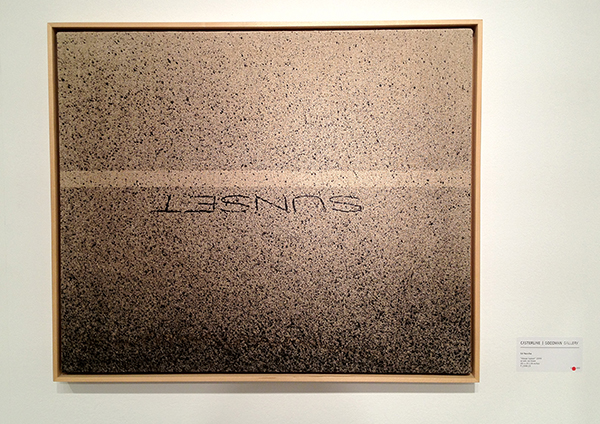 Other heavy-hitters included two works by Ed Ruscha, one drawn with chewing tobacco and this one (above), which after about an hour sold for $195,000 (or that was the number on the label). Also on the walls were Damien Hirst, Jeff Koons, some Warhols, a small recently unearthed Louise Bourgeouis, and Hans Hoffman (who the hell still collects Hans Hoffman?) 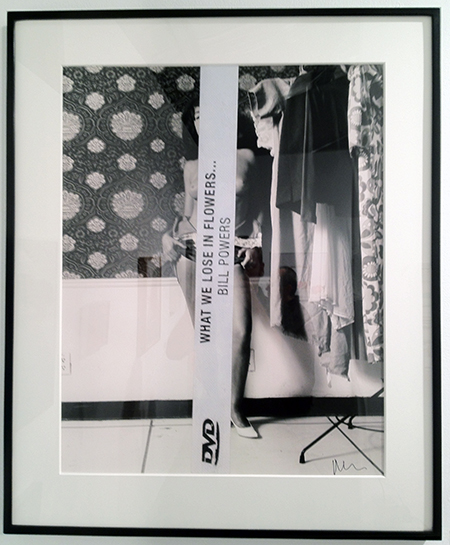 I almost bought a recent Richard Prince photograph. It was cheaper than the David Levinthal below it. It almost seemed like the new Mac laptop could wait. But I didn’t bite the bullet. It would’ve also helped if I liked the piece. If you collect Richard Prince and have an extra $2500, you might want to call the Albuquerque-based Richard Levy gallery. 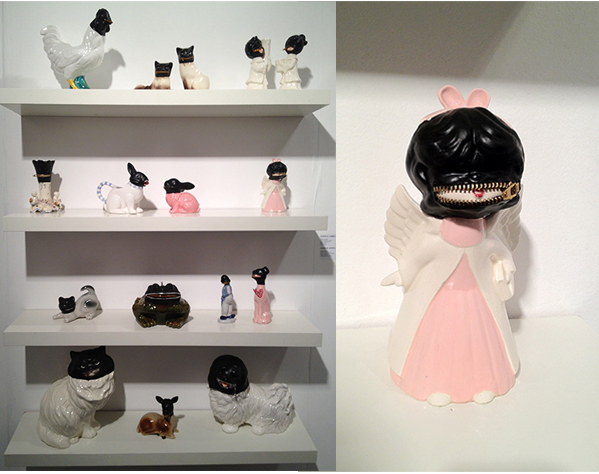 Charlie James Gallery (Los Angeles) was a humorous space full of satire and criticism of American culture.  These kitschy porcelain collectible figures stacked on shelves had black leather zipper-masks on all their faces. It was sort of Jeff Koons meets Catherine Opie. I wonder if either of them would like it. It’s a reminder of how innocence can so easily be turned to something menacingly perverse. (Ever seen an episode of Toddlers in Tiaras? Child abuse, in my opinion, not cute.) 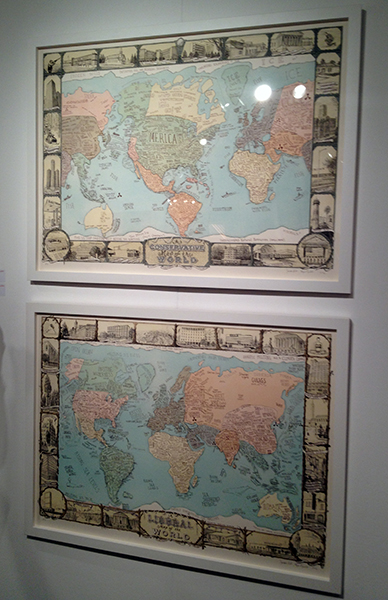 Sandow Birk had two stacked maps, one was the “Conservative Map of America” the other, you guessed it, the “Liberal Map of America.” They had the anthropological/diagrammatic feel of Mark Lombardi but the satire from an issue of Mad. I’m trying to ignore politics. It’s hard. But these maps were spot on. You can see them more closely here. 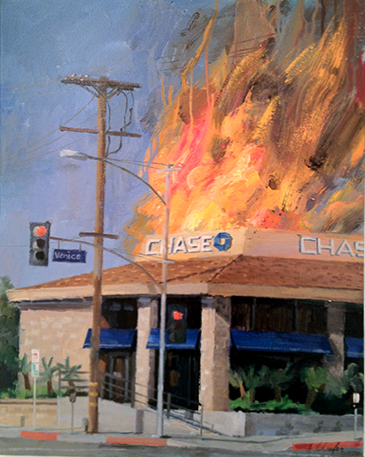 Alex Schafer’s burning banks. No good person wants to be an arsonist. But painting burning banks is a good way to express a frustration, and a truth about the burning heap o’ cheats big bankers can often be. 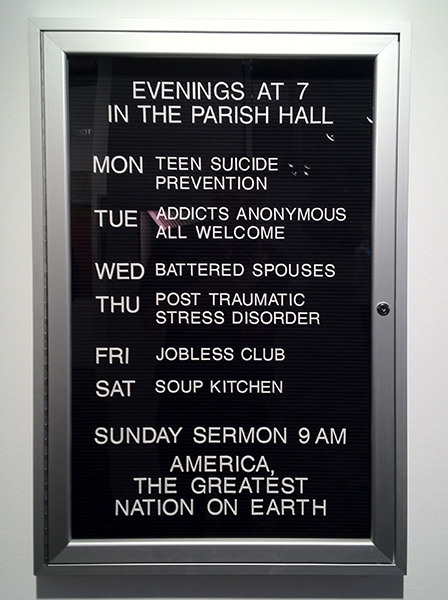 This piece upon immediate glance makes you think it’s really there to tell you some information. And it is, but Erika Rothenberg is obviously using the aesthetic of the sign you’ve seen in churches and local community organizations to tell you something a little more provocative. It’s kind of a new take on Margaret Bourke-White’s Kentucky Flood. If an award could be given for the most fun in a booth, it would go to Charlie James. 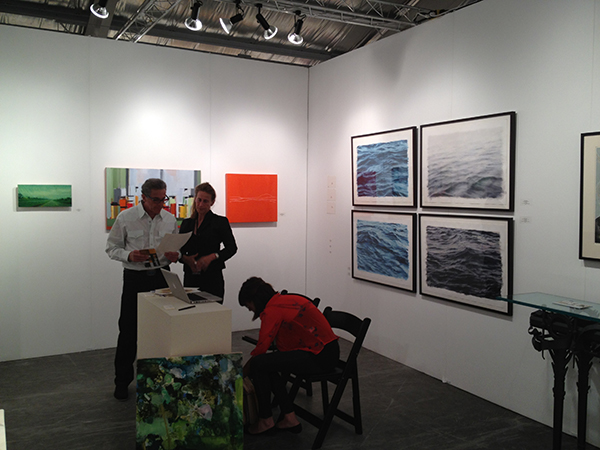 I saw work from a distance by Jason Willaford and Julie Speed, and remembered them from Galerie Urbane in Marfa. But then I realized it was Gerald Peters Gallery, who recently closed its Dallas location and moved to the tiny West Texas town/international art hub. Gerald Peters is another entity that wields the crossroads of Southwest and Contemporary Art (with big presence in Santa Fe and New York). The Marfa move seems like the right one for them, but I wonder what effect (if any) it has on Galerie Urbane (Willaford’s gallery where Speed also showed) and their Dallas/Marfa thing. 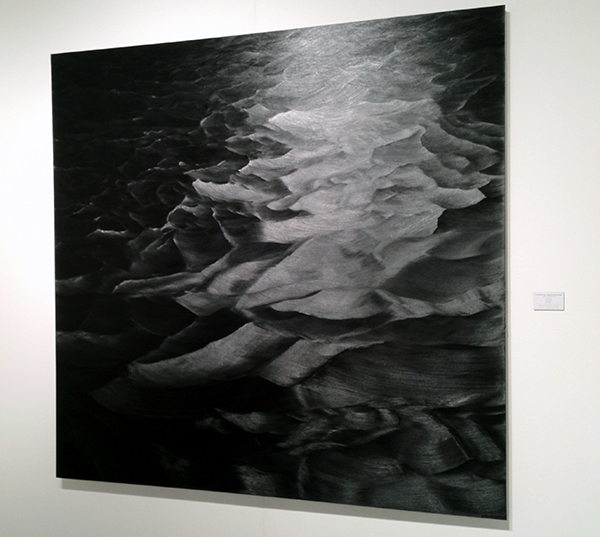 I’ve seen this work by Karen Gunderson in Santa Fe, where William Siegal Gallery plays an ancient/contemporary angle. It’s hard to photograph, but you can see better reproductions here. It’s black on black. It’s like if Ad Reinhardt loosened up or spent more time on a boat.  I love how Gunderson takes a relatively simple gesture (like moving a brush across a monochromatic panel) and conjures the dark-swelling depth of the ocean. 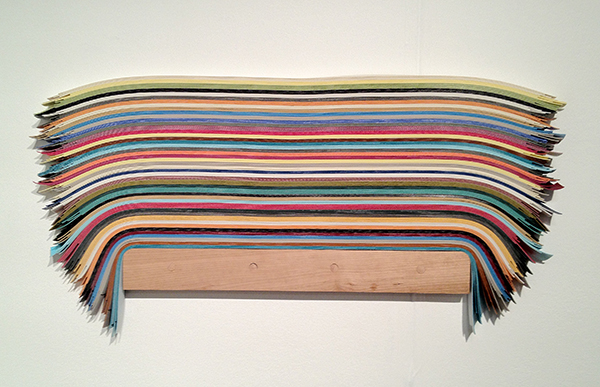 Here’s some attractive work by Derrick Velasquez (Robischon Gallery, Denver). I wanted one but the prices weren’t on the label which meant I should enjoy them and keep walking. 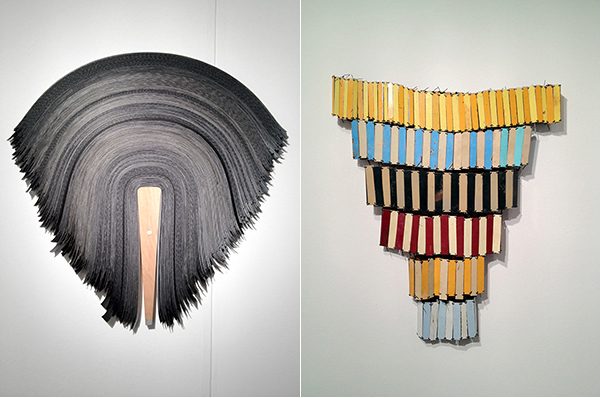 I overheard a man talking to a friend saying something like “I should’ve taken out a mortgage before I came here, this ain’t no outdoor fair.” It made me think that Aspen, while full of wealth, still has a patronage that isn’t quite used to this. (It’s only the third year for Art Aspen). In a way it pointed to how Surls has been able to navigate around a traditional yet adapting gallery system (as well as an adapting public)– and though Surls has suggested that it’s no longer relevant, his presence there drove home that putting oneself in front of the right people is still a necessary part of the process.

Art Aspen had a lot of remarkable work — and though the likes of Ruscha and Hirst hung just a few booths down, it was Surls who still seemed like the big fish (or bear) in this mountain-high art pond.

i like your writings and incite John…..only disagree on the Han Hoffman thing. i would collect his work. keep me posted on your work. maybe see you at Art Basel this Dec?

I truly enjoyed how you write things! thanks so much for putting things in such a literal but semi humorous light that made it so easy for an add person to read!