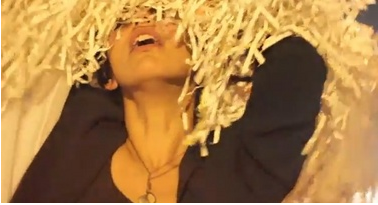 Still from Escape Bird Mini: Illness and the Shaman, 2011

Part II of my fantastic chat with artist Christina Sukhgian Houle who is in Mexico City for six weeks as part of the SOMA summer artist in residency project.  We chat about the residency, culture shocks, noise and transition, sepia tones and cantinas…

LMC: So talk to me a little bit more about SOMA.  Why did you decide to come here with the program rather than just on your own?

CSH: I really felt like it would help me work toward reaching some sort of community.  I was ready to come here on my own if I didn’t come with the program, but given the options, you know, between coming to a new country and not really speaking the language then trying to build that community, or coming with the program, well at the time it felt overwhelming to come here without that network that SOMA provides.  You were the only person I knew and I felt that there was a lot of energy to direct towards you, whereas right now if I were to come here again in the future I would be a bit more self-sufficient.

A lot of my reasoning with SOMA was to also get a cursory introduction with the art world here and help me get my bearings then figure out who are people that I want to be in touch with a year from now, and who do I want to work an internship with next year.  I also think if nothing else if I were to come back I would feel better equipped to just be here and knock on doors, and the idea of that three months ago sounded like a lot.

You know, I can see myself coming here and spending time maybe after my degree, or maybe taking time to be here between years, and now it feels really accessible and nice, which is kind of what I was hoping for.

LMC:  So tell me of any of the cultural shocks that you can think of off the top of your head, some of those initial differences that you’ve seen since you’ve been here these first three weeks.

CSH:  Well, it’s hard to get used having to buy water.  Or we have one of those big garrafones at home and sometimes one of the two of us doesn’t replace it and that’s just crazy to me to not have water to drink.  It’s also really cool how good the recycling and compost programs are.  I love that.  I love that I don’t have to do my own compost pile.  It’s nice to not have to deal with it, and have someone that comes to pick it up and they compost it for me.  The orgánico and ínorganico trash cans on the street are really nice to see.  The metro is crazy crowded, and I had never experienced the way people use their bodies in the metro in other places like in New York or Chicago.  It’s an aggressiveness that doesn’t feel threatening but I just wasn’t accustomed to it.

I love that I see people making out everywhere, that’s totally amazing.  I see older peoples just holding hands and putting their hands in each other’s pockets, and that’s super sweet, and it’s something that I don’t see anywhere in the states.  I was in the park the other day and it was funny because I saw a guy walking in the park and he had dirt all over his back and it was obvious that he had just been pressed into the ground with his girlfriend on top of him for however long, and it was so funny to know what that’s what that meant.

I love the music vendors on the subway that carry those big speakers, and the performance in that the voices that people use that just repeat, and repeat.

I’m also surprised by the noise.  I wake up around 7am every morning because something is happening outside my window.  Today they were doing some work on my apartment, and I didn’t think they would work on Saturday, but sure enough they’re out there, and they’re working right outside the window.  So I woke up and went to make coffee and there’s this guy right there in the window looking at me.

LMC: So are you happy that you’re taking this moment between undergrad and grad school?

CSH:  I think this is like the most perfect experience for me as far as being prepped for grad school.  I’m coming straight out of undergrad so I’ve had a very limited experience in the art world.  The majority of those experiences have been through Texas State.  I’ve had some isolated experiences in the professional art world, but it’s never been in feedback format, it’s always been like I submit an application and either I get in or I don’t get in, and if I get in we are already starting on the page of them liking my work and there’s not really a dialog around what’s working or what’s not working because in the context of a show it’s just not what happens.  So, it’s been really fantastic to have my academic demands stepped up to the next level, and to also have my critiques stepped up to the next level.  It’s also been nice to have time to acclimate to those demands a little bit.  I think that what’s expected of me at the graduate level is going to be very different than what was expected of me at the undergraduate level and I’ve been told that maybe it’s not ideal to go directly from one to the other but I feel like I’m also maybe not a prototypical undergraduate.  So I don’t feel tension about that decision, but I do acknowledge that it makes something like this experience extra important.

LMC:  Well absolutely, you’re putting yourself outside the comfort zone that you’ve been in for four years.

CSH: I also think that it will make that transition easier.

LMC: Are you kidding?  After being here for six weeks transitioning to New York is going to be a breeze!

CSH:  Oh, I know and it’s so inspiring and so funny, I got here and I thought, “Holy shit, it’s a bunch of people my age who are really smart and making a bunch of shit!”  Everyone was making stuff that was exciting at SOMA and they were challenging themselves and each other and that’s so fantastic to be around.  It’s so fantastic to be around a bunch of people who are really taking their work seriously, and it really brings elevates the level of conversation.  It also makes critique so different because everyone has more invested.  Don’t get me wrong, there were great students and faculty at Texas State, but to be in something where everyone is really invested across the board is just so new.

LMC: I also think that central Texas in particular is just so young, and it’s being built as it’s going along whereas Mexico City has a strong theoretical and critical history in art that functions.

CSH:  I also think that the people running the SOMA program and people who have decided to come to the program are making work about things outside of themselves and I don’t feel like I got that as frequently in Texas.

A few weeks ago we got to see Teresa Margolles speak to us about her new project at SOMA because she’s so passionate about why it’s important to make art and why she’s doing it, and I can’t remember hearing anyone talk about their art in such a way where it felt so relevant.  I’ve definitely heard artists talk about their work that got me excited in that they were seeing the world in a different way, but I also feel like there’s just more at stake here, maybe that’s it.  The investment of making things about the sorts of issues that Margolles attacks is totally different.  What’s happening here as a country is so different than what’s happening in Texas or even the U.S. and I think that it’s reflected in the work that’s being made and the people who are interested in coming here, and the people who are running SOMA.

It’s also interesting to be here at the time of this election, although I don’t feel like I totally understand what’s going on.  It was so incredible to see the protest, just to see hundreds of people with hundreds of signs was amazing, and it was amazing to see people getting passionate about what was happening.

I don’t know why but that reminds me of another cultural thing, and I’m going to reveal my naïveté, and I don’t think I was cognitively thinking this, but for some reason I just kind of thought that I was coming to the desert.   I was kind of hoping to see some sepia toned life experiences, and sombreros and cantinas…

LMC: Well, we can make the cantinas happen, but I’m not sure if I can help you with the sepia tones! Well, any last thoughts?  Are you planning on showing your latest project through SOMA while you’re here? How do you think SOMA will change the project?

CSH: You know, I don’t know.  I’m trying not to be too attached right now, I’m trying to just see how things go.  I want to be open to whatever outcome happens.  After all, I’m going to have two years of making things after SOMA so I feel like I’ll have time to catch up.