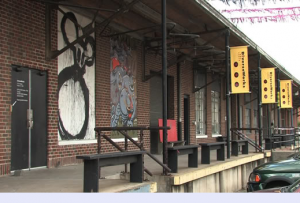 After 20 years of love/hate in the “docks” warehouse north of downtown, Houston art space DiverseWorks is relocating to 4102 Fannin Street in the heart of midtown. This move, the third in the organization’s history, jumps the gun on the org’s anticipated move into proposed Independent Arts Collaborative.

Located at the intersection of Fannin and Cleburne streets, DiverseWorks’ new home was once part of the original Cleburne Cafeteria (1941-1969). The new space inaugural show will open September 7 with video art from Keren Cytter. DiverseWorks’ old warehouse space, the hub of artist loft development in that part of town, will permanently close on October 31st. A farewell party is scheduled for October 20, after the opening of Cytter’s show.

The org’s press release spins the move as a rebirth: new home, new staff appointments, and new public programs. Beginning with the appointment of Elizabeth Dunbar as Executive Director, the recent addition of Jennifer Gardner as Director of External Affairs, and last weeks’ hiring of Rachel Cook as Assistant Curator, leaves Artistic Director Sixto Wagan as last man standing of the old regime. Dunbar and Wagan have redefined the org’s mission as well: the new focus will be on commissioning and presenting works by artists who cross disciplines, media, and genres.

The new spin has generated two new programs, also announced today: DiverseWorks On Wednesdays, a weekly evening “mash up” of cultural activities, and Diverse Discourse, a series that brings internationally-renowned arts professionals to Houston for lectures and studio visits.

(-10) for spelling => “annnounced” is misspelled in the first sentence of the last paragraph.

Fixed! But teach, please give Bill extra extra credit for staying on top of newswire during his European vacation…