Dispatches from Documenta: Part II, At the Bahnhof

Although Christov-Bakargiev’s concepts cohere at the Fridericianum, the most memorable Documenta site is just up the hill at the Hauptbahnhof. There, amidst massive spaces that were formerly used as storage and mechanics for the train station, are some jaw dropping installations. Hronline has created an impressive interactive map that allows 360 degree views of the galleries, and Janet Cardiff and George Bures Miller provided their own tour of the station that was synced to one’s location in the building. This is a video of someone watching the tour.

My favorite installation was a video by Clemens von Wedemeyer that was edited as a three-storied triangle, a concept which sounds confusing but starts to make sense as one walks around the three large screens in the room and sees their layered overlapping stories. Based on a site near Kassel that has been used as a monastery, prison, concentration camp, girls’ reformatory, and psychiatric hospital, the three films move in and out of the history of the building. One shows present-day schoolchildren on a tour of the site learning about what happened there in the past, the second tells the story of American soldiers entering the concentration camp in 1945, and the third is of an actress who is staying at the girls’ reformatory as part of her research to play the role of Ulrike Meinhof of the infamous Red Army Faction. One can create a unique non-linear experience of the film by walking around and piecing the narrative together. 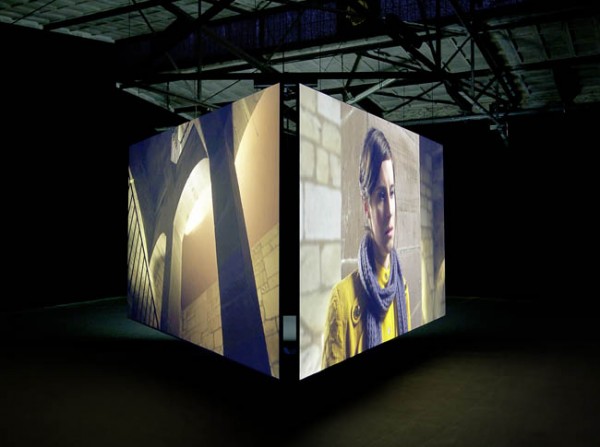 Nearby, Haegue Yang has filled a long hall with her signature blinds that slowly open, close, raise, and lower in a slow, melancholy choreography. Despite its enormous scale, the installation is one of Yang’s quietest. No voice over, video projection, lights, or smells as in her well-known Series of Vulnerable Arrangements (2006- present). Only the sound of one’s own breath and steps falling on the pavement accompany the rise and fall of silver blinds. 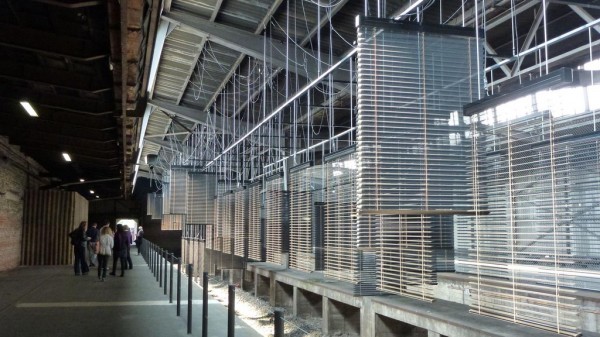 István Csákány had the most impressive installation at Documenta in terms of craftsmanship — Ghost Keeping (2012). He reproduced a massive sewing workshop entirely out of wood and lined the far edge with mannequins dressed in beautifully tailored suits that would have been sewn on such machines. The meticulous detail in the suits and machines is captivating and makes labor itself the subject, material, and fallen hero of the scene, which is an appropriate anti-monument in an exhibition filled with artwork that for the most part is not actually crafted by the artists.

Rabih Mroué’s The Pixilated Revolution (2012) is getting the most buzz of all the installations at the Hauptbahnhof. The room was packed when I was there, people muscling their way in to the video room or to flip through the flip books on a long table. The subject is the Arab Spring, specifically the violent images of the revolution captured on cell phones. The flip books showed short videos taken with cell phones by people who seem to be shot by the end of the video. There is a button that provides the audio and the flip books can be flipped in sync with the sound. The poignant separation of sound from image borders on abstraction, yet is really quite visceral and moving. Below is a video of Mroué discussing the project.

In such an overstimulating environment, Florian Hecker’s understated sound installation was a wonderful place to pause and just lose yourself in a non-visual environment. You can listen to the track and download a pdf of the text by Reza Negarastani here. Hecker has transformed the voices into what he calls a “chimerization”– echoless and distorted so the process of understanding what is being said and the experience of listening and hearing the sounds are misaligned. The effect is liberating and a little scary. 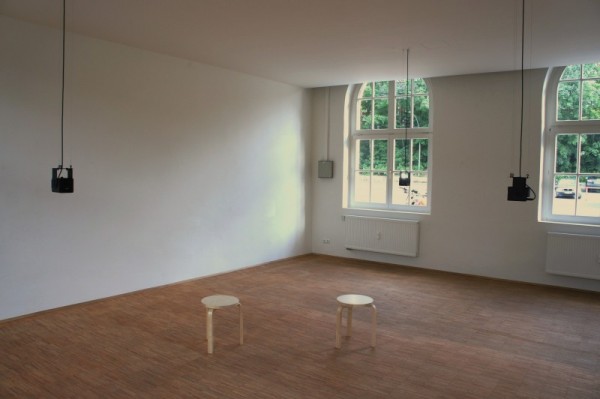 Chimerization By Florian Hecker at Documenta 13

More on other Documenta sites in my next post . . .

thanks for new inspiration !!!