Nasher Makes Sexy with Ernesto Neto: Cuddle on the Tightrope 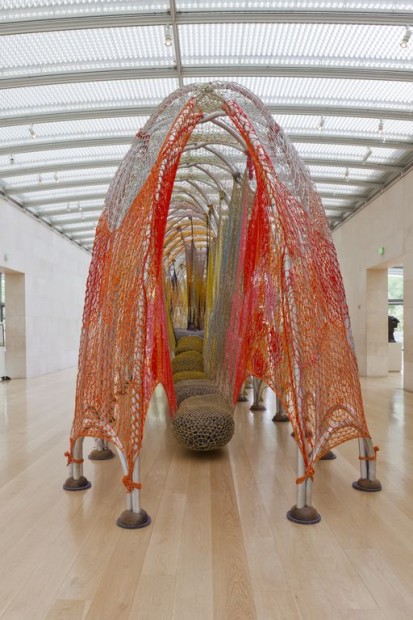 Ernesto Neto (pronounced NEH-toh) may have created the world’s cleverest aphrodisiac: it takes a while to realize Cuddle on the Tightrope is a journey into a vagina, but as soon as you’re done, you know you want to keep entering. By that standard, the Nasher’s new game of mounting sensual, experiential installations, started last year with Martin Creed’s glorious Half the air in a given space, perfectly defies the stuffy elitism charge sometimes hurled at museums.

Cuddle on the Tightrope is an exhibition consisting of a single work – Kink (2012). The installation runs end-to-end in an upstairs, light-filled gallery. A line forms at the piece’s entry, where attendants are waiting to hand you little blue or white booties to replace your shoes. You sit on a squishy glob that looks like a giant flattened bug to do the exchange. Another attendant stands at the entrance, allowing five people in at a time and sweetly doling out the rules: no swinging, no running, no jumping. 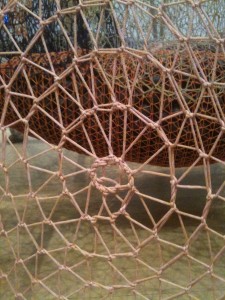 When your turn comes, you grab onto a strong and durable spider web of crocheted wall, then step onto a dense – but not quite solid – spine that will serve as your road (made of tightly bound air balls, like the flattened glob by the entrance). With the spine and the pinkish walls and the architectural segments of the structure, you feel like a piece of plankton inside a shrimp (your second pass brings the eureka moment when shrimp gives way to vagina).

If you stand still, the spine wiggles, so you are compelled to keep moving. You find you are rising up away from the floor at the same moment your feet sink into the spine. It’s a high cocoon built strong and safe. The walls to which you cling are not actually the outer walls you see when you enter the gallery, yet they look identical, so you have a sense of being too large and too small at the same time, like Alice in the rabbit hole. You feel swallowed.

Kink, a smaller cousin to Neto’s gravity-defying O Bicho SusPenso na PaisaGen (2011) in Buenos Aires, probably draws at least a few dismissals from people made uncomfortable by the sensual forms of Brazilian neo-concretism or who prefer to remain a passive gazer, and more than one lady in line refused to leave her handbag in the safe care of gallery attendants. Oh, but children love it! Watching two little boys gleefully, mindlessly disappear down those long vertical folds was like watching two gleeful, mindless little sperm on a race with destiny.

Cuddle on the Tightrope runs through September 9, 2012, at the Nasher Sculpture Center.

Betsy Lewis is a Dallas writer who understands that not everything is about sex.

I was a bit disappointed with the Neto exhibit. It seemed less sexual than his other work and more in-line with a kid’s playground. A few years ago, I saw his work in New York. It was a complete immersion into the womb. As an antidote to the chaos of NYC, it was a wonderful haven for my students and I to discuss everything we had seen that day and enjoy a brief respite.

At the Nasher, once I was inside the work without hordes of people, it became more interesting. But the waiting in line to walk through the installation left me wanting more.

the song in the video says <>pepa<> which in spanish means vagina or p*ssy.
I like the piece. He does some amazing things with kind of inducing an altered-state/nonordinary reality. There are enough sensory things going on that you’re constantly imputing sensory; you forget everything outside 🙂