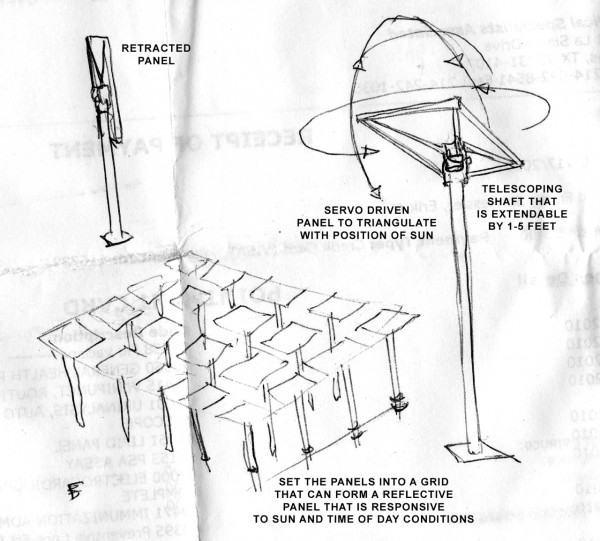 I really don’t understand the brouhaha over this Museum Tower thing. All I see are opportunities. Perhaps the lawyers on both sides lack vision. Lawyers, arbitrators, city council members. Not Jeremy Strick, or the press, of course. Clearly, the Tower and its creators are at fault. That’s well established. But Nasher’s hands are tied, and the press keeps getting threats from MT people. Probably voodoo dolls sent in the mail to Tim Rogers.

That’s where my Facebook and art cohorts come in. We’ve got it figured out, and everybody wins.

Look, the Nasher is a sculpture center. What’s one more sculpture to the collection? Likely commissioned—no, donated—for pennies. Who wouldn’t want to donate materials and man hours to such a sensible, high-profile, fun project? It would make international headlines. People would make pilgrimages to behold its glory. Because everyone I’ve talked to wants to see this happen.

(Oh, all you Museum Tower reps, shut your pie holes for a sec. I’ll get to your benefit in a minute. Your tenants—nonexistent as of this writing—get something in the mix, too. I know you need to sell condos, and I love firemen as much as every other straight American woman does.)

So, one of Dallas’s more admirable enfant terribles, Erik Schuessler  (yes, he of the brothers Schuesslers, with their annual Disturbathon and excellent tech design firm Brainfood) came up with an early solution, and so far I haven’t seen one to beat it. In fact, it dovetailed in a zeitgeist (forgive the term, but there it is); everyone likes this one. It would take some extra artists, engineers, yes, and some architects.

But here’s the rough, original illustration. Many of you have already seen it. 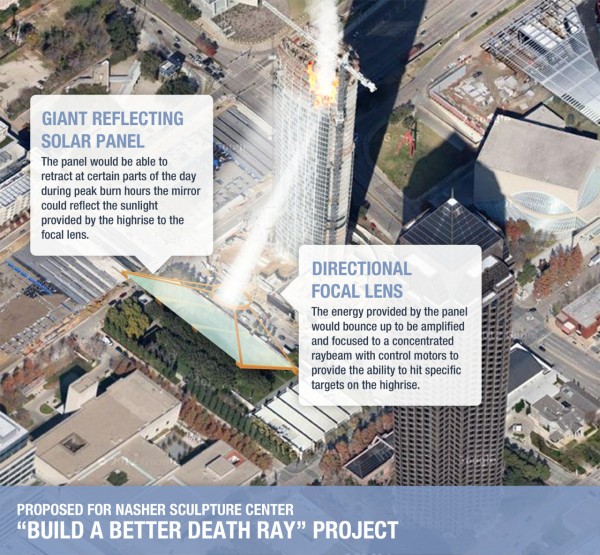 Here’s a slightly more refined idea he sent me, sort of Gattaca-esque, but could be just as effective. 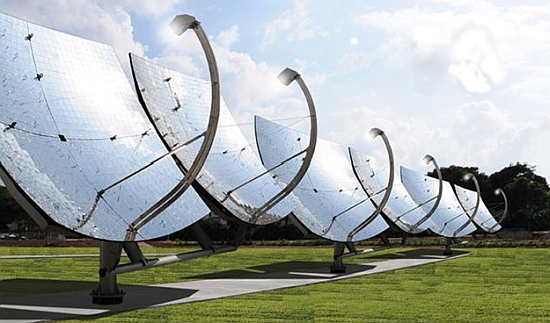 Yes, it’s a massive dish that redirects all that searing, deathray light right back up at the tower. So simple. So elegant. So…. large. In the Nasher garden. Meanwhile, under its generous shade of dish canopy, the ducks could take naps, the grass would grow, the trees would flourish, the sculptures could stop expanding in the heat, and the Picasso could go back up on the wall inside the Nasher building. We still have to deal with the Turrell tragedy, I understand, but perhaps Turrell would be so psyched about this development he’d come figure out a way to work it into his redesign.

The dish could have pedigree all over it.

I’m pretty sure Gary Cunningham would be on board, perhaps as the on-the-ground proxy for Mr. Piano. And, as the co-author with Schuessler as primary artist, should I dare wish for: Robert Irwin? Some have suggested Anish Kapoor. Nah. I have a crush on Irwin, so we’ll go with him. I’d like Ron Wommack there as well, to push for the most aggressive light throwback. He’s from West Texas. He knows sunlight and heat like nobody’s business. He knows how to make it beautiful. Russell Buchanan should be there to make sure the interior surface of the bowl is sufficiently sleek and shiny and kind of European looking. But don’t let him talk us into lining it with platinum, or adding an elevator. We need to keep to some kind of budget.

Next, we hire Cam Schoepp, Greg Kennedy, Greg Ruppe, Chris Powell and Tom Orr to begin execution. Those strapping, creative men, with their gantry cranes and pickup trucks and body harnesses and tool belts would start gathering materials from all the metal and material donators (why do I picture the wonderful Vernon Faulconer silently behind some of this?), and, like a major barn raising, get it going. (Could we get a publicity shot of Matthew Barney, be-harnessed, volunteering for a day? Kind of in the spirit of a Habitat for Humanity promotion? Preferably a naked Matthew Barney? Or is he old news? I like Tony Matelli. He’s kind of sexy. I would like to see Tony Matelli in a harness.)

Also, dads. We need a lot of dads on the site too. Yelling advice, barbecuing, wearing hardhats, arguing over the virtues of mesquite versus gas. Dads are good at that. My dad can do a mean rare steak on a grill, and he has a lot of guns he could pass out to this ground crew, to keep the MT lawyers off the lawn. (I call dibs on the German WW2 Luger. I too need to keep Jim Schutze off the lawn. He doesn’t like art anyway.)

How do we fit in Liam Gillick? It doesn’t matter, really, because if we just fly him in and set him in place, he’ll talk and talk and talk to everyone who has questions, especially the international press, and somehow, without anyone understanding a word of it, it will all make perfect sense. Something about relational aesthe…. never mind. It’s in his capable hands.

We need a band to entertain everyone during the construction phase. I think At the Drive In is back together. Music is invigorating. It’ll boost morale. They could collaborate with the Dallas Symphony Orchestra, though the flautists shouldn’t count on keeping their chairs underneath them, because At the Drive In likes to throw chairs around.

I mentioned that everybody wins. Including Museum Tower. Here’s how: People in Dallas seem to enjoy being unnaturally tan. The buyers of the condos facing the Nasher now have a guaranteed, year-round tanning salon IN THEIR CONDO UNIT. All they have to do is stand at the window. Or maybe anywhere in their apartment. Hell, I don’t know. It’ll be pretty bright up there. I mean, there should be ambulances stationed on the street level at all times and EMT workers in the Tower lobby 24/7, because there will be a lot of second- and third-degree burns, but buyers will know what they’re signing up for. Also, the kitchens of the Tower restaurants don’t even have to buy ovens. The heat’s already on-site, always at the ready, like an Aga. Delicious pizza. And if that’s not a guaranteed selling point for Dallas clients, I don’t know what is. The realtors could charge more for the units facing the Nasher. I bet John Sughrue would move right in.

Paul Slocum, of course, would develop an iPhone app that would allow users to incrementally, remotely redirect the massive dish as they wish. The center blast of the ray could climb a few floors, or move over a few condos, etc. I mean, the Nasher would have to keep an eye on the real sadists (though I recommend giving this job to the Nasher’s own Anna Smith, because she has a good sense of humor and likes practical jokes), but it could be pretty badass, for both Nasher fans as well as MT residents. A top seller for the iPhone, I’d guess.  Android: keep up! I have an Android.

Can you imagine how cool Dallas would be if we went through with this? We’d be the new… Marfa! Well, at least other cities’ newspapers would stop writing about how lame our new arts district is.

In the end, just before the christening (Wendy Strick gets to break the bottle of Bollinger on the base of this new sculpture), we fly tattoo genius Dave Wallin in from NYC to get up into the dish and etch, ever so finely and subtly, right in the center of it, Terri Thornton’s immortal words (in Times New Roman font, of course): “where is the power”.

Christina Rees was an editor at The Met and D Magazine, a full-time art and music critic at the Dallas Observer, and has covered art and music for the Village Voice and other publications. She was the owner and director of Road Agent gallery in Dallas. Rees is now the Curator of Fort Worth Contemporary Arts, TCU.

Museum Tower, in Need of Louvers, Gets New...

The Museum Tower glare issue extends far beyond the Nasher Sculpture Center. The sun reflects off all sides of the all glass building from sun up to sunset. Reflective sun is blinding and adds to the already ‘adequate’ heat in the Dallas Arts District. The success of the outdoor venues (Sammons Park, Annette Strauss Pavillion, Flora Street, and the new Klyde Warren Park) are dependent upon public pedestrian activity. Dallas civic leaders have the power and responsibility to protect the public and private current and future investments in this area.

I’m on board with a new place to eat in the arts district.

Joleen! Good point! And how ironic that MT would cook and blind the Woodall Rogers Tunnel Park – a park built solely to raise property values of MT! But then, that park wasn’t built *for people to visit*, it was built for MT residents *to look at*.

Awesome. For a cheaper solution, perhaps we could rent a helicopter and have Ms. Rees fly over the Tower and unleash this explosion of art-snob name-dropping all over the property shattering the offensive glass facade into a million shards of curatorial goodness all over downtown. That would really put the Dallas Arts District on the map.

Is there a way to direct the death ray to certain other local structures, like the W hotel, specifically the Ghost Bar?

We need to get some astronomers on board.
The huge new telescopes already in operation or being planned feature compound mirrors — individually programmable to make minute adjustments to compensate for instabilities in the atmosphere that otherwise would spoil the focus.
With such a system in place, the Nasher Great Reflector could focus the sun’s rays to a laser-like precision and intensity. The result would be not just a beam of light, but a virtual light-scalpel. Coupled to a CAD program, a stylus and a servo-mechanism, this device would permit an artist to literally carve Museum Tower like a cube of butter.
Think of it, a gleaming 47-story ICE SCULPTURE! What would John Graham or David Smith have done with such a medium at their disposal? In comparison, creation of the Statue of Liberty and even Mount Rushmore would seem mere than whittling.

Very happy to see so many of you in Dallas are on board with this very creative and IN YOUR FACE idea.
Where was everyone when Dallas Arts District Artists were located at 1700 Routh IN the Arts District (ignored). Tracy Hicks, myself, Alfonso in the frame shop, Caroline Ometz and several others stuck it out for years (ignored). Even the Native American Arts Council had hard, hard, times getting people to come to Artist Park for the annual Indian Market usually in October. I was in charge of the art show and competition and believe me, you missed out on some fine Native arts.
Maybe this is a payback? Any way, how about Mr. Turrell taking on this “reverse” project or better yet? get Christo to WRAP the building. The tenants would have more climate control and everyone else around the area would not be blinded!

Now this is funny. Turning Museum Tower into the worlds biggest easy bake oven. I like it. With Serra sized giant graham crackers and a monstrous marshmallow and a boat load of chocolate, the opening cerimonies could be epic. Everyone likes chocolate.

[…] an art museum, the best way to attack is via art. A version of this idea has been proposed already, rather brilliantly, on Glasstire. My suggestion is, in one way, less outright aggressive and, in another way, even […]