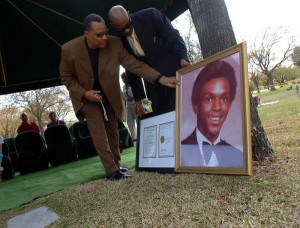 Lubbock City council voted to place a public marker commemorating Tim Cole, who was wrongly convicted for a 1985 rape, and who died in prison at age 39 after fourteen years of incarceration. He was the first person posthumously exonerated by DNA testing in Texas, and was pardoned in 2010 when governor rick Perry signed the pardon, almost a year after an Austin court declared him not guilty. The $25,000 bronze and granite monument, designed by local artist Eddie Dixon and paid for by attorney Kevin Glasheen, will be placed on city property at 19th and University Ave that will become a public park. The monument carries a text similar to that of the State Historical Marker that already stands near Cole’s gravesite.