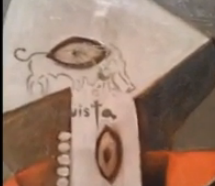 Pablo Picasso’s Woman in a Red Armchair (1929) was vandalized last week when a man in a dark suit approached the piece and stenciled the word “Conquista” and a picture of a bull across the figure’s face. A video uploaded to YouTube shows the whole thing, and dedicates the piece to “the art beast Pablo Picasso.” Fox News reports that the Menil has confirmed the vandalism, has already repaired the painting, and is working with the police. Both the sprayer and the videographer, who may have been a confederate, escaped without being identified.

KPRC’s version of the story includes an interview with the lower body of someone who claims to be the videographer.

I don’t like this one bit, but blurring art and life opens the door to such political acts.

“political acts”. A dunce did something stupid, guess that is political

Yeah, I guess we should be glad he didn’t try to eat its face off…

This is really tired.
1. Picassos have been vandalized before – be creative, try a Ruscha or a Leger.
2. This guy’s paintings that are posted online are pretty rough and Picasso would know that an enamel paint is going to bond with a varnished oil painting.
Picasso wins, and remains the better painter.

So, even as an act vandalism it is a total failure!

Also, these “street art” types pretend to be so against the museums when they just desperately want to be recognized by them are just so tiresome.
Real street artists are just out there doing their work with no concerns about museums or galleries.

Really, Damon Smith? Who are these “real street artists … with no concerns about museums or galleries”?

The significant thing is that, after eighty years, young artists still care enough about Picasso to vandalize his work. I’m sure the Victor Brauners and Yves Tanguys hanging nearby, untouched, feel jealous.

I am not sure how much this person cares about Picasso. If he cared enough about Picasso he’d know that Tony Shafrazi already spray painted “Kill Lies” across “Guernica” at the MOMA, a far more monumental Picasso in 1974. So he’s already been pre-upstaged.
As an action, it just kind of falls flat from every perspective – poorly researched & badly done.
It shows a total lack of understanding of art materials and art history!

I don’t understand the concept …to show you care, you vandalize.