What the White Hides, It Also Reveals: David Aylsworth at Inman Gallery

David Aylsworth has debuted a subtle and beautiful new group of canvases, in which the color white carries paradoxical tensions of opaqueness and translucency, form and space, content and blankness, erasure and revelation of what lies beneath. Aylsworth’s paintings typically have globs, chunks and ridges of paint built up on their surfaces that hint at his process of working a canvas over and over again in his studio. The white sections of paint in this exhibition go one step further by allowing colors and forms to bleed slightly through to the top layer, revealing a previous iteration of the painting that lies beneath. Process thus becomes a more palpable subtext to the composition, which infuses their calm minimalism with a certain vibrancy. 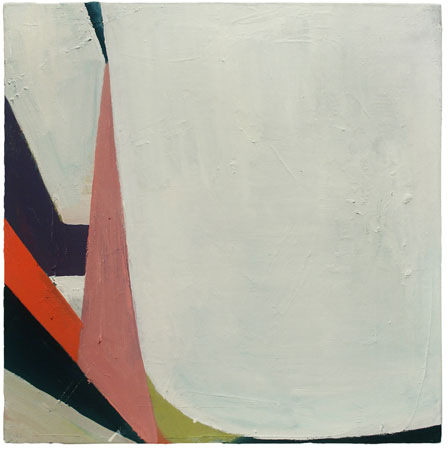 Most of the compositions in Aylsworth’s exhibition are active, using asymmetries and angular geometries to set the image in motion, as in the painting at the entrance to the exhibition, Spider Spinning Daydreams (2012). Where white would normally recede to the background, the large white form on the right of the canvas seems to come out toward the viewer. Its cylindrical volume is propped up by a pink kickstand that keeps the white shape from falling into the narrow, dark abysses below it. Here the white mass seems solid and almost heavy, while in paintings such as Indubitably (2011) the white sections appear light and mobile, as they converge on each other leaving only a tiny, black point at the center. 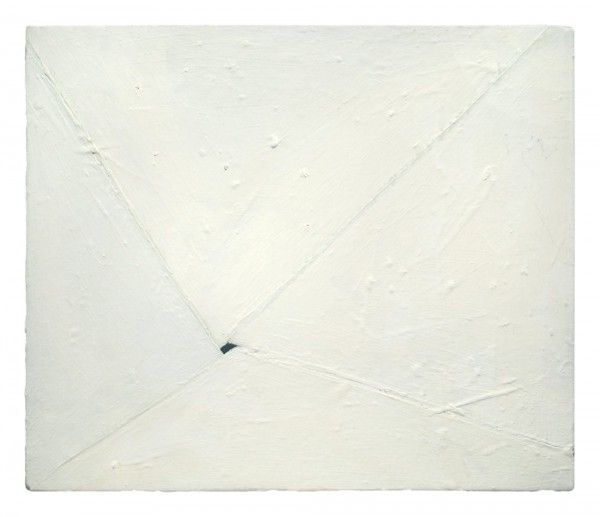 Other works, such as Boring from Within (2012), are more enigmatic. In this painting, one is unsure where the white exists. Is it a static background, or the top layer masking slits of color beneath it? These works that keep you guessing, which also include many from the first gallery—such as Bridges All Were Crossed (2012) and Mad Dogs (2012)—are the sort of paintings one can spend a lot of time with. They seem to change with each viewing, which means that they leave room for the viewer to bring themselves to the work. For of course, it is the viewer that changes; not the painting. In these seemingly mutable works, the white acts almost like a screen onto which one can project their own emotions and interpretations. The passages of white paint are thus like an anti-image, one that through a plain white evokes a colorful range of associations, meanings and interpretations echoed by the barely perceptible tints and textures that one can read underneath the surface of the white, like a palimpsest. 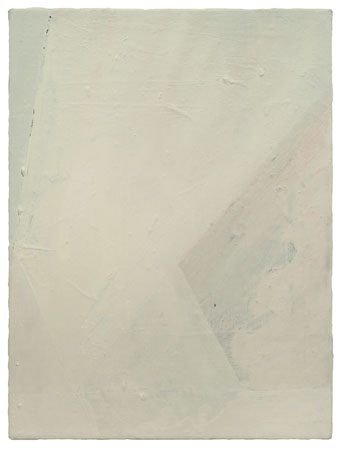 The association of Aylsworth’s white passages with artistic process, memory and subjectivity in general leads back to the artist himself and what painting large swaths of white across the canvas might mean to him. This question becomes especially pressing in the last gallery, where many of the canvases are almost entirely white. Perhaps Aylsworth is using the pale top layer of paint as a way of keeping something of the painting only for himself. As he erases what was there before, it lives on only in his memory, notes and documentations of his process. In this act of concealing, Aylsworth leaves more room for the viewer to enter the work, and the paintings start to live somewhere in between the artist’s process and the viewer’s imagination—as if the canvas were blank again, and the artist has left only traces of what he created before. These residues are like a world onto themselves, where subtle perception imbues forms with character and brings them to life. Instead of making something out of nothing, as artists often do, Aylsworth takes something he created, makes it like nothing, and then asks us to understand it in our own way. 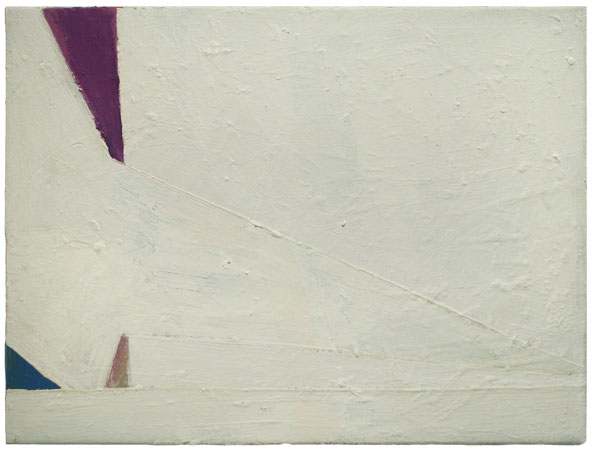 David Aylsworth
The Reverses Wiped Away
Inman Gallery
Through July 7

Rachel Hooper writes a blog on Glasstire and is a PhD student in art history at Rice University.

David;
I like the new direction your work is taking. Congratulations on the show.
Barbra Munisteri

The grand master of pentimento AND compositional transpostion: David Aylesworth. A must see/experience at Inman Gallery. A most insightful review of the best painting show in town.