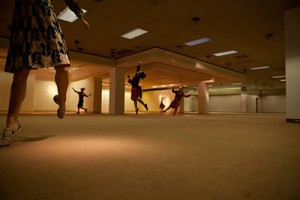 Independent Art Collaborative, move over! The new West Oaks Art House, the crazy-ambitious scheme to turn a 100,000 square foot former department store into a massive art venue in west Houston, has opened. On Saturday, June 9, 16 dancers from Suchu Dance Company performed “Afternono,” roaming and mingling with audience members in the cavernous former JCPenney space as part of the 10th anniversary of their Big Range Dance Festival.  According to Swamplot, which has been following the re-purposing project from a real estate angle, impresario Sharsten Plenge, daughter of  Steve Plenge, the managing principal of mall owner Pacific Retail Capital Partners, has tidied up the space, and said that the  inaugural performance in the mega-space “marks the beginning of what we hope to be many more unique projects.”

It’s never going to be as cushy as a purpose-built theater, but with advantages like free rent, endless acreage, and being already built, the ad-lib venue is already providing  performance space to Suchu, one of the IAC’s proposed tenants!

In case you missed it, there’s going to be another performance on Saturday June 16, at 1pm.

It’s fantastic to see examples of arts groups in Houston continuing to find and make use of repurposed spaces in innovative ways, bringing art to every corner of our city. There is always a role for temporary repurposed spaces such as WOAH to play in the arts: they contribute a dose of the unexpected and unpredictable to the art-viewing experience of the audience member, and are ideally suited for one-off site-specific performances. There is also a hugely important role to be played by smartly designed, cost-efficiently constructed, ground-up, purpose-built spaces such as the one the IAC is deep in the process of creating on Main Street, on the Metro light rail line, catacorner from the Ensemble Theater. Our experienced and diverse team of IAC planners and designers, drawing on frequent input from Houston artists, community leaders, and arts organizations, is intently focused on providing Houston artists with a centrally located facility where rents are affordable and stable thanks to a long-term, sustainable business plan. We are intently focused, too, on providing Houston artists with the technological infrastructure necessary to make possible lengthy performance runs in a highly controllable environment, with flexible seating configurations, sprung floors for dancers, reasonably good acoustics for voice and music, lighting and ambient environmental controls appropriate to the visual arts, and rehearsal and office space designed to be conducive to highly productive artistic and administrative work. The IAC facility will be a lean and efficient purpose-built space that will serve Houston for the long-term, and rest assured we are watching every dollar carefully, both the dollars to build it and the dollars to operate it. As always, we welcome your comments, feedback, and questions at http://www.iachouston.org.

Hello Bill, thanks for the article! And hey Louie, cheers to you, us, IAC, and WOAH [and Glasstire for supporting both of these projects!] Two completely different project scopes, with different program initiatives and terms– essentially there is no comparison to be had. IAC is creating a sustainable resource for Houston arts and cultural organizations–WOAH is a temporary space for artists to realize site-specific projects. We are both very honored to have the opportunity to work with such a talented team of local artists, like Suchu. I really look forward to seeing how both of these projects continue to evolve and tracking how we both–in very different ways–address our shared dedication to bringing art into the public sphere.

This is such a brilliant idea. Venue is such a transforming part of any art piece, and I’m sure this one will help to create some really unique pieces. Way to go, Suchu!