by Bill Davenport May 19, 2012
FacebookTwitterEmail 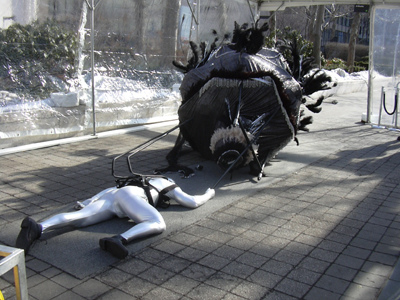 The Museum of Fine Arts, Houston (MFAH), has given the 2012 Meredith J. Long Core Program Award to Gabriel Martinez. The $10,000 prize, presented at the Glassell School of Art Benefit and Auction Friday, May 11, was inaugurated in 2008 and is given annually to a second-year Core artist-in-residence in recognition of exceptional artistic merit.

Winners of the Video Association of Dallas’ 11th Annual 24-Hour Video Race were announced on May 14 to a packed theater at the Angelika Film Center in Dallas and can be seen online.  Fifteen winners completed a five-minute film in 24 hours, beginning Friday, May 4 at 11:59 p.m. and ending Saturday May 5 at midnight, in a competition sponsored by the Video Association of Dallas.  A total of 62 teams started the Race, and 54 teams finished on time.

Three finalists were chosen in each of several divisions and were awarded first, second and third places, some with serious prizes: The Hollywood Division winner receives $5000 worth of equipment rental from Panavision.

Gabe Martinez is an awesome artist! So glad he won the award. I saw the Scope performance (picture) in 2010? and it was amazing.

Thanks for sharing the 24 Hour Video Race winners!