by Margaret Meehan May 14, 2012
FacebookTwitterEmail

So I’m bringing back my series Mirror Mirror to Glasstire which was named in honor of its first posting and dedicated to all the multitasking, multi-talented, and multimedia artists who deserve a little shout out for their various incarnations. Mirror Mirror #7 presents HOMECOMING!, an experimental art collective based in Fort Worth, Texas that is as dynamic as it is energizing. 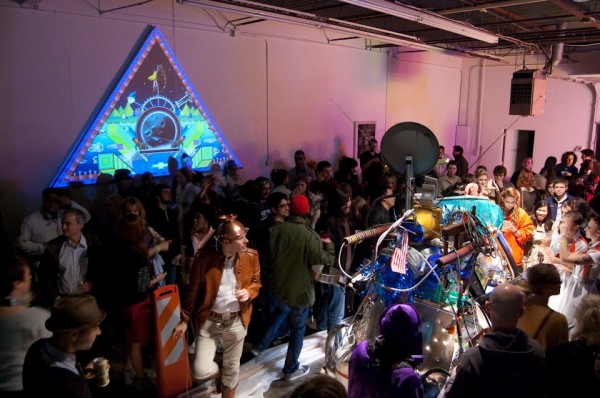 Launched in December of 2011 and sparked, perhaps ignited, by the return of Bradly Brown from NYC, HOMECOMING! began as a convergence of minds (Brown, Kris Pierce and Gregory Ruppe) who had all known each other in Denton and witnessed first hand the Good/Bad Art Collective’s notorious events that happened over eight years ago.

Together the three recruited thirteen artists who were interested in working collaboratively in addition to their own individual art practices. Artists interested in happenings as ephemeral moments rather than tangible and permanent objects. HOMECOMING! hopes that through shared experience they can “transform the ephemeral into the tangible.” As far as work distribution, HOMECOMING! says it can sometimes be tricky. As a fairly new collective, they are open to trying out individuals… Lucky for them it has worked out in their favor as the people they really want to work with, work hard and have stuck around so far. 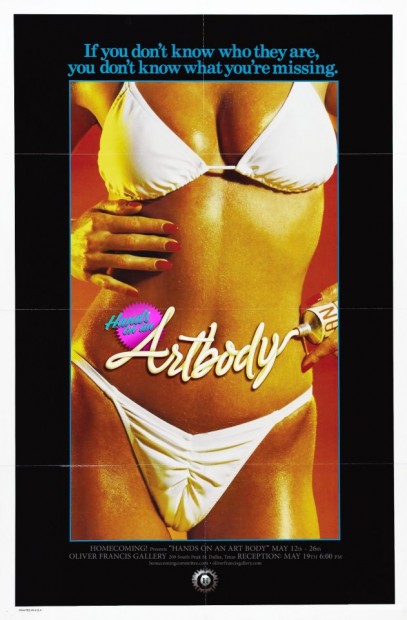 This Saturday night May 19th at 6pm Oliver Francis Gallery hosts the collective’s latest endeavor, Hands on an Art Body, a one-night competitive art acquisition, and the buzz they are building around the event is smart and hilarious:

Hands on an Art Body is inspired by the 1997 documentary Hands on a Hard Body in which twenty-four contestants competed in an endurance and sleep deprivation contest to win a brand new Nissan Hardbody truck.

The hook: just place your hands on any work you desire in the gallery.  The line: master of ceremonies Richie Budd will be serving shots of  “de-gold” schlager from his recent performance Schlager at the Triangle Arts Association in New York. The sinker: remain there with your hand on chosen artwork throughout the evening until you are the last one standing. HOMECOMING! promises it “to be a test of your endurance, stamina, mental focus, and bladder control”. The last participant left in contact with the art at the end of the night acquires the work. Warning the participants will “endure bizarre installation, social deprivation, and artwork that is designed to resist the contact of the viewer”. Unlike most gallery closings this exhibition will give ownership of work not to the highest bidder, but to the individual who displays the greatest will and determination. HOMECOMING!’s system of acquisition seemingly devalues the object through constant contact but to those persistent contestants its worth will only increase as the moments of competition and desire tick away. 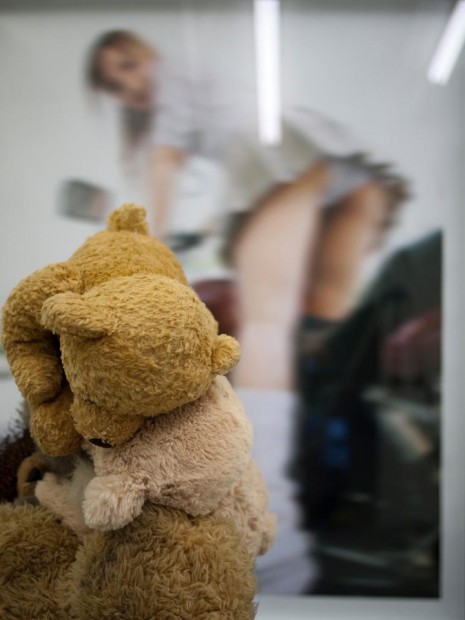 Teaser image for Hands on an Art Body.

You can make an appointment to preview the work up for grabs from May 12th – 18th or go to the gallery the night of the closing reception from 6pm- 9pm before the start of the competition. During this time, those wanting to compete for work will need to register and be briefed before the official start. According to the press release “referees, coaches and cocktail waitresses will be on-hand to mediate and assist contestants”. The competition will continue until each work is left in contact with only one triumphant contestant. Whether that’s hours, days or weeks, HOMECOMING! and what I’m assuming will be an enthusiastic audience thinks your up for the challenge.

So what’s up next for HOMECOMING!? Look for them to be curating a series of guerilla style video shows called In-Transit through the summer of 2012. 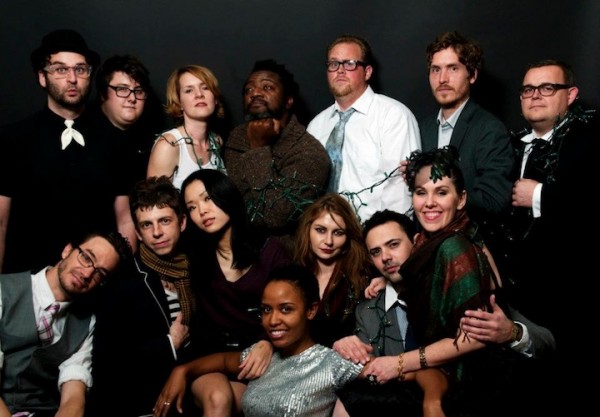 I’m an artist originally from Ft Worth TX and here’s my hilarious story. Any coverage will help:

According to the Aspen Art Museum’s recently mailed annual report: “In the sixth year of the groundbreaking Aspen Art Museum and Aspen Skiing Company partnership, the duo presented unique collaborative projects that celebrate the shared vision of art in unexpected places.” Cough.

According to the Aspen Daily News, the Art Museum banned the whistleblower Mulcahy from all museum functions, including its leased public building [owned by Aspen Citizens]. The museum most recently made news in Germany under the search tags ‘petty tyranny’ and ‘protect artistic’ freedom:
——————————————————————————–
Man’s ban from future museum site unconstitutional
Publiziert am 6. April 2012 von Nietzer

A local man wants a judge to void the Aspen Art Museum’s ban that prevents him from stepping foot on property owned by the institution.
Lee Mulcahy filed a lawsuit against Heidi Zuckerman Jacobson, the museum’s director and curator, in Pitkin County Court on Thursday. The lawsuit, which seeks $250, says his ban from the museum’s future location, an empty lot at Hopkins Avenue and Spring Street, is unconstitutional.
The artist and former ski instructor apparently ran afoul of the museum in November. Detractors of the museum’s relocation into downtown hung “For Sale” signs on two tractor-trailers at the future site. The museum’s manager told police that he had video footage of Mulcahy hanging the signs, according to an officer’s report.
Mulcahy’s lawsuit against Zuckerman Jacobson contains a letter to The Aspen Times from Aspen resident Richie Cohen in which Cohen admits to hanging the “For Sale” signs. The court filing also mentions Zuckerman Jacobson’s comments to the Aspen Daily News about the vandalism. She said in November that the museum would be installing lights and cameras on the new site to deter similar acts.
She also referenced the signs on display in New York City subways — “If you see something, say something,” she said at the time, encouraging people to call police or the museum if they witness suspicious activity.
“To protest this treatment of the community, the plaintiff created an art piece, wrote a letter criticizing [Zuckerman Jacobson] entitled ‘Criminal or Hilarious?’ and … painted ‘Meet the Art Police,’” Mulcahy wrote in the court filing.
Mulcahy, representing himself, says in the lawsuit that on another occasion, he taped a “citation from the citizens of Aspen” and a piece of art inspired by Occupy Wall Street “onto the museum’s sign and surveillance camera pole.”
He was later told that he had been banned from the vacant lot.
Mulcahy, who on Wednesday filed a libel lawsuit against Aspen Skiing Co. CEO Mike Kaplan in connection with the plaintiff’s dismissal from the company in January 2011, cites the First Amendment in his suit against Zuckerman Jacobson.
The amendment “is designed to protect artistic and other expressive activities from petty tyranny,” the lawsuit says.
Asked for comment about both lawsuits, Mulcahy late Thursday sent an email containing quotes from former national security advisor Zbigniew Brzezinski, Martin Luther King Jr. and Frederick Douglass. He did not respond to additional efforts to reach him Friday.
Because of the museum’s nonprofit status, Mulcahy apparently considers the future site to be public property.
As such, he and others who similarly disagree with museum officials’ plans “will be chilled and burdened in the exercise of [their] First Amendment rights because of the continued threat of arrest on public property,” the lawsuit says. “The ban is unconstitutionally overboard in that it renders subject to incarceration and other treatment persons who are ‘very verbal’ about the museum….”

————————————————————–
Dear Aspen Art Museum and Philanthropist Paula Crown, owner of the Little Nelk where this event was heldl, doctoral candidate & student at the School of the Art Institute of Chicago in… art,

Since art is by its definition indefinable, let me help your understanding with some quotes from my recent gigs in Berlin:

“Artists are citizens, artists are social and political subjects. There is no border between art and life, art and society.” -Artur Zmijewski
[“Artur Żmijewski (born 26 May 1966 in Warsaw) is a Polish visual artist, filmmaker and photographer. During the years of 1990-1995 he studied at Warsaw Academy of Fine Arts. He is an author of short video movies and photography exhibitions, which were shown all over the world. Since 2006 he s artistic editor of the “Krytyka Polityczna”.
His solo show If It Happened Only Once It’s As If It Never Happened was at “Kunsthalle Basel” in 2005, the same year in which he represented Poland at the 51st Venice Biennale. He has shown in Documenta 12 (2007), and Manifesta 4 (2002); Wattis Institute for Contemporary Art, San Francisco (2012, 2005); National Gallery of Art Zacheta, Warsaw (2005); Kunstwerke, Berlin (2004); CAC, Vilnius (2004); “Moderna Museet”, Stockholm (1999). Earlier this year he presented Democracies at “Foksal Gallery Foundation”, Warsaw; and is making new work for The Museum of Modern Art (Moma) in New York as part of their Projects’ Series in September 2009. “Cornerhouse”, Manchester, will also present the first major UK survey of Zmijewski’s work, spanning his practice from 2003 to the present day, from November 2009 – January 2010.”-wikipedia]

or……..”Forget passivity” by Sarah Handyside in the magazine Exberliner, issue 105:

“The 7th Berlin Biennale for Contemporary Art not only comments on politics-it provides a platform for political action and collective participation. As promised, rabble-rousing video artist Artur Zmijewski and co-curator Joanna Warsza are blurring the line between art and action at this year’s Biennale. They’ve invited Occupy activists to take over the entire first floor of the KW building…. Ambitiously, Zmijewski and Warsza are also launching TheGlobalSquare.org, a decentralized, open-source network that endeavours to unite all social movements into one seamless global collaboration….”

“Art can activate forms of dissent and critical thought regarding the global system.”-Teresa Macri
i
“If artists should be honoured to be hosted by a museum, there is an idea of culture understood as a form of entertainment.”-Maria ROsa Sossai, Art critic and curator, Rome.

“Getting beyond individualism means to starting to exist politically, in a form of solidarity capable of opposing the utraliberal dictates that usually govern the art world.”-Laurent Faulon, artist, Rome.

From one of the exhibits @Berlin’s KW Institute for Contemporary Art’s 2012 7th Berlin Biennale:

“In history, it has been seen that artistic innovation tends to flourish,to a great extent, where economic liberalism is most inventive and uncontrolled. The status of the artist is based on social conditions neoliberalism would like to offer workers as a whole. Besides a near total lack of social guarantees, this hypercompetitive system produces a situation of general submission to the system….”
“I am forced to orient my production between a luxury product for collectors and an accessory with a social function that is justifiable in terms of public expenditure, the control I have over its political and social role decreases in proportion to the acclaim it is able to gain. Starting with this observation, it seems out of place to expect an explicitly political commitment from the content of my work, without running the risk of seeing it as a mere motive or alibi….” – Laurent Faulon, Artist, Lives and works at the Instituto Svizzero di Roma