by Katie Geha May 12, 2012
FacebookTwitterEmail 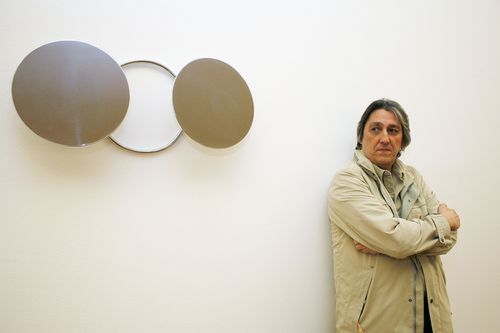 Waltercio Caldas is one of Brazil’s leading contemporary artists. His work is often linked to Neo-Concretism, a movement in Rio de Janerio in the 1960s that included artists such as Lygia Clark and Hélio Oiticica, Caldas is currently planning a retrospective spanning four decades of his work to open at the Blanton Museum of Art in the fall of 2013. Katie Geha spoke with him about his work and this project while he was on a site visit in Austin.

Waltercio Caldas: When it was too late.

KG: What do you mean by that?

WC: I guess I realized it when I was not exactly trying to be an artist, but just trying to express myself. I was in the process of trying to understand what other artists were doing. And in this process, I began to think about answering some questions that I was seeing in the work of these artists.

KG: Which artists? Which questions?

WC: When you look at an exhibition you see that the artist is trying to say something. You realize that this is a language and you realize that this language can say much more than you expected to hear. And I think this aspect of art, this infinite possibility of language, was the first interest I had in art.

KG: When you talk about that language as it relates to art making, it makes me think about objects and space and the relationship between materials and space.

KG: How do you choose your materials?

KG: So the materials are secondary?

KG: You’ve previously talked about an object having both absence and presence. Can you explain that more?

WC: When you look at an art object for the first time, you don’t know exactly what it is you are looking at. You are trying to locate yourself. You want to know who the artist is and when it was made and does it belong to a school of thinking? It is in this moment that the object uses its own energy only. It is not related to anything else. For me, this is the real moment of an art object—when it is there alone, its sole energy, trying to be itself. It is its own effort.

KG: And maybe this has to do with the materials? A pane of glass is transparent, a mirror is reflective . . .

WC: Exactly. All of the material features are exactly as they are. The place the object occupies is part of the object. I consider everything to be a material.

KG: The negative space too, correct?

WC: I think negative space is the biggest space. What we don’t see is a great material. A big material.

KG: And yet, what we don’t see is dependent on what we do see.

WC: That’s where the artwork begins. Trying to establish a relationship between what we see, what we still see and what we should probably see.

KG: Is your work related to a still life tradition? In terms of an object being just an object. Not having any kind of allegory or meaning behind it?

WC: Yes, that is exactly deliberate. I have no narrative in the work except for the story of the work itself. What I am trying to isolate is exactly this quality of an object that is not submitted to a system of images. Of culture, in a sense. I think that culture in art has a very hard relationship.

KG: A string is a string?

WC: What I want them to know is that the distance between the string and the object is as important as the string.

KG: What about the relationship between the object and the place in which it is set? Are you thinking about the work in relationship to the architecture of the Blanton?

WC: Yes. All of my exhibitions relate to the space the work inhabits. If you take one of the first art places ever, say the Lascaux caves, you can easily see that the image, the painting, the attitude of the artist and the place are one and the same thing. You cannot separate the place from the thing that was made in the place. If you are an artist, you are working with three-dimensional work, you must consider the space in general as a subject matter for the work. This has been a very important point for all the exhibitions I have ever done.

KG: Tell me more about the Blanton project.

WC: It is a challenge for me. I am putting together works from different moments in my career. Which is interesting for me because I can rethink my poetics and this is the most exciting challenge. The exhibition will be successful for me because I have a chance to look at these works as if I were not the author, as if I were seeing them for the first time.

KG: How is your work tied to a Brazilian tradition? Or is it at all?

WC: When I was eight years old I think I saw the construction of a city like Brasilia. We got into modernity in such a way… Corbusier said we Brazilians have an “intimate horizon” and that this is an aspect of landscaping that we created. The first time I saw one of the first 1906 airplanes created by the Brazilian Alberto Santos-Dumont, I realized that there was a connection to Brasilia. I realized that we Brazilians are condemned to be modern. And this is a territory my generation found when we began to work. I am very happy to have this territory made by a strong history of modernity.

Great interview/article. Already gives me insights, support and ideas to work with that resonate with how I approach and create my work.

I especially liked this: “There is no secondary thing in an art object. Everything is important…I think the art object is the poetic conjunction of all these parts so that no one part is better than the other.”

Thanks – can’t wait to see the show!