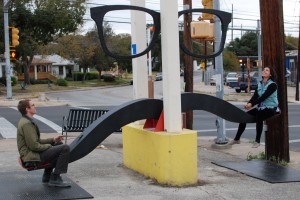 From unobtrusive collages, paintings and collections housed in old pay phone nooks, to the the flamboyant, ride-able mustache seesaw by ¡el grupo!, Austin’s Payphone Revival Project has been quietly reanimating abandoned pay phone booths with art since 2010. This year, the second round of installations has placed nine new artistic interventions on Austin’s streets (map), with support from the City of Austin through the Cultural Arts Division, the Austin Chapter of The Awesome Foundation, Restoration Media, and Flower Basket Lady Bug.

In conjunction with next week’s Fusebox Festival, there will be two bike tours passing all nine of the new art installations. The tours will begin on April 28th at 11am and April 29th at 4pm at El Chilito (2219 Manor Rd) and end at The Tops Building (1100 East 5th), following a meandering route through central Austin.

The first set of seven Pay Phone Revival Projects, organized by curator Bridget Frances Quinn, hit the streets in In November, 2010, and about 40 people peddled around East Austin to see them.