Menil Gets Bank of America Grant to Restore Chamberlain Sculptures 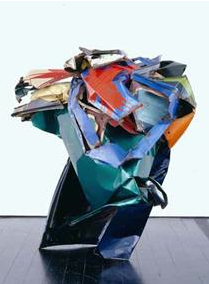 The Menil Collection has been granted an unspecified, but “generous” amount of money to restore 12 sculptures by the American artist John Chamberlain through Bank of America’s Art Conservation Project. The Menil is one of four domestic projects awarded a grant.

Chamberlain’s steel works “possess inherent vulnerabilities”, from flaking paint to rust, and grime in their many crevices. The Menil will treat the 12 pieces in consultation with the artist’s studio, beginning with Nanoweap (1969), Rooster Starfoot (1976), currently on view in a major retrospective of the artist’s work, John Chamberlain: Choices, organized by the Solomon R. Guggenheim Museum in New York.

That’s what I strive for in my work, “inherent vulnerabilities”. Doing my part to keep those art preservationists employed…..