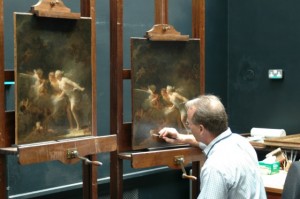 Dallas Museum of Art Director Maxwell Anderson has named ex-Getty Museum conservator Mark Leonard as the Museum’s first Chief Conservator, signaling an expansion of the DMA’s conservation program, with more staff and a renovated painting conservation studio to come. Leonard was Head of the Paintings Conservation Department at the J. Paul Getty Museum, but quit in 2010 to pursue his career as an artist. He starts work July 1.

The Conservation Department at the DMA currently has one staff conservator and a small studio; Leonard’s appointment represents the launch of a new push for  more a more comprehensive on-site conservation effort. Fundraising for the ambitious expansion is underway, with $1.1 million raised so far.

Houstonians will remember Carol Mancusi-Ungaro, whom Anderson lured away from the Menil Collection in ’02 to start the conservation department at the Whitney when he was there. Apparently a bailiwick of his.