As Frescoes Lift Off, De Menil Posits New Uses for the Menil’s Second Chapel of Emptiness

On March 6, workers unscrewed the conveniently removable lid of theMenil’s Byzantine Fresco chapel to remove the sacred bits and Culturemap’s Tyler Rudick was on hand, with a photographer, 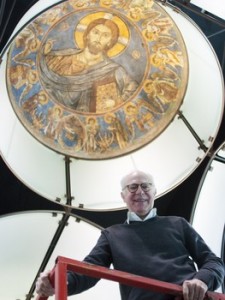 to interview architect Francois de Menil, Dominique’s son and designer of the frosted glass fantast that has supported the 13th century fragments during their stay in Houston.

De Menil himself speculated on the newly vacant building’s future: “While much of the building was derived from the frescoes and the glass chapel inside,” he said, “it still has a lot of possibilities. . . it could be a kind of experimental annex to the museum with new media and different types of artwork than may not be conducive to the museum setting.”