Flex-Us [In Cooperation with Muscle Nation] at Ro2 Art 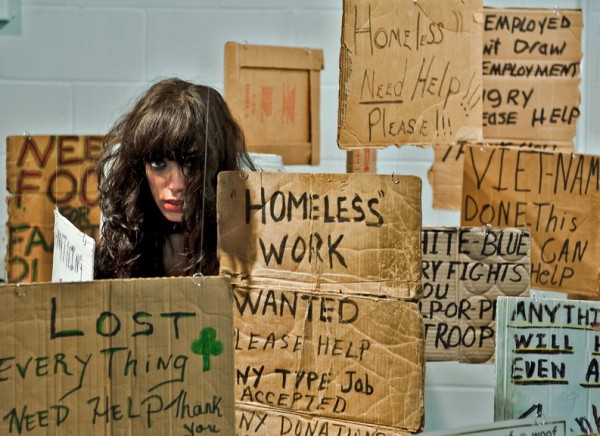 Ro2 Art has two spaces in downtown Dallas within walking distance of each other and a third location a few miles away in West Village. In personality, these two neighborhoods are wildly, comically different. The Kardashians got press coverage while shopping in West Village. Akard Street between Main and Elm is the citiest part of the city. The Ro2 space on Akard sat vacant for six years until it was repurposed as a gallery by mother-son team Susan Roth Romans and Jordan Roth. (Before that it was a Curves Fitness Center, hilarious!)

Every four or five years, a new art collective rises from UT-Dallas. The latest of these is Muscle Nation, comprised of Andy Amato, Willie Baronet, Danielle Georgiou, Hillary Holsonback, Emily Loving, and Robin Myrick. Rather than the UTD campus’s predictable surburbia, Flex-Us tilts toward the urbanity of Akard Street through the uncompromising uniqueness of its individual artists. 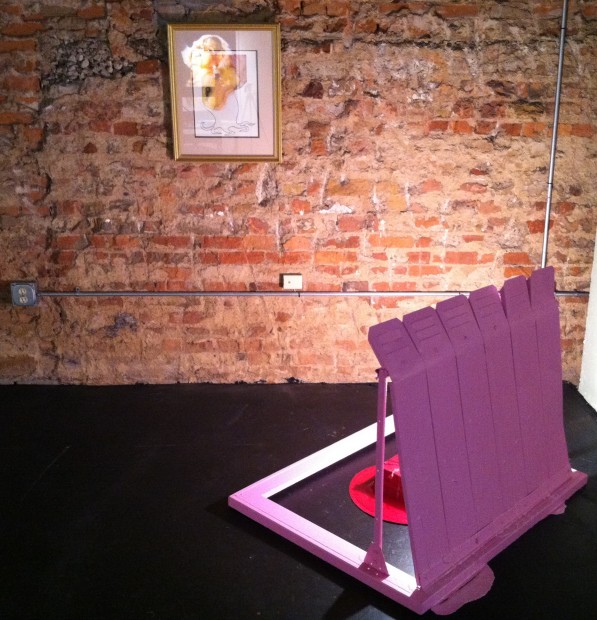 Andy Amato pairs watercolors with found object, found paint sculptures. The paint he found was pink! pink! pink! I would love to read deeper meaning into that, but I was  familiar with his work prior to this show, and “found paint” is literal. I think he once said it was whatever Home Depot sold cheapest. I have seen some, um, interesting adventures in Amato experimentation in the past, but this work is precise, and thoughtful, and his pairings of small painting with big sculpture suggest a couple of weird-dream tableaux whose stories are lost to history.

Willie Baronet’s cloud-like installation of cardboard signs from homeless people hangs in a corner, summoning you to choose the best, most effective messaging from its competing pool, from “MOM + 3 KIdS NEEd SOME HELP THANK YOU” to “IN NEED OF PIZZA” on the back of a Little Ceasars box. It’s branding, like any other advertising—some have smiley faces, some have Jesus fish, some claim veteran status. The really captivating thing was the back of each message, the piece of cardboard presumably found on the street by each sloganeer. Bud, Shiner, Frito-Lay, the Schlitz Malt Liquor bull, Presto Electric Skillet, Old Orchard, a yard sign that read “Taxes $200 Instant,” Organic Grass-Fed Beef (the handwriting on front of that one: “There Is No Pride Or Dignity In Doing This But It Beats Stealing”).

Emily Loving’s piece is an installation piece of a chair found on the street where she lives. My take: questions of who lived in this chair, how it got stained, the unknown domestic story. Jordan’s take: rebirth. 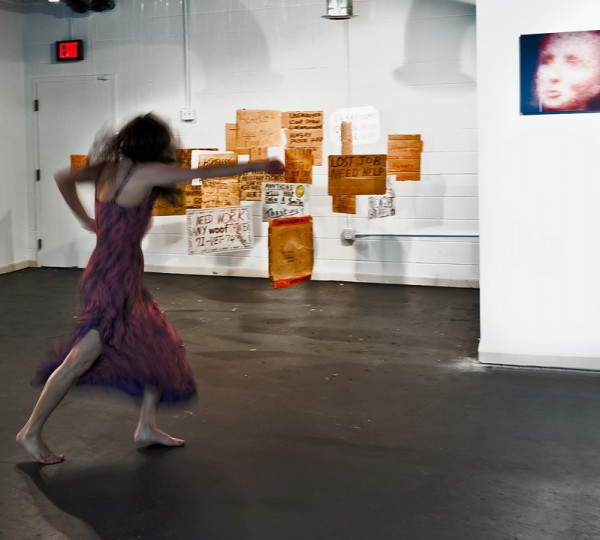 Danielle Georgiou did a performance piece on opening night as her contribution. I wasn’t there, but Jordan said she danced around the gallery spacefor literally three hours. When I visited the next day, a video of Georgiou was set up to replace the live version. What interests me here is that the video is not really the work of art, it is there as a proxy for the work of art. There are no other sound pieces in the room and the display is truly elegant. It adds to the ambience but doesn’t actually command your attention. We’ll see where she goes next with this.

Robin Myrick, whose work I had not seen before, seemed to need more room to breathe. Her three digital prints from two series, Slow Translationand The Conversation, seemed overwhelmed by the rest of the room. Produced with the aid of low-tech filters like cheesecloth and dirty transparencies, the images are blurred and creepy. Jordan said they were taken from a televised senate hearing. That strikes me as a promising idea, but since the concept intended a series, it might be losing thunder by limiting Myrick’s presence in the show to a few pieces that are just parts to a whole. 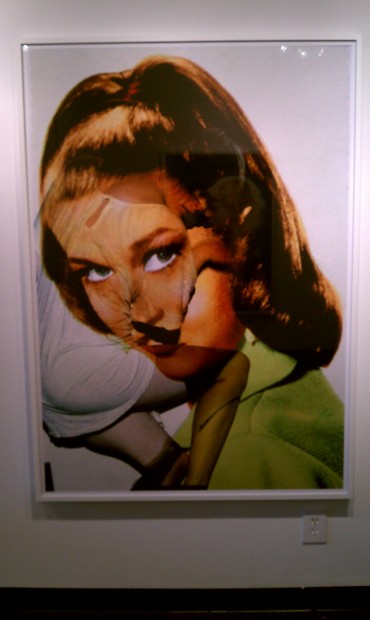 Finally, Hillary Holsonback, with two totally rad photos of starlets with faces smashed and herself superimposed into the image. They are large photos placed on perpendicular walls. You will identify one as Marilyn Monroe, but it’s Carroll Baker, young Luz Benedict from Giant whose heart gets broken when drunken Jett Rink pines for her mother Leslie instead of herself, and star of the scandalous Baby Doll with Karl Malden. The other starlet is a very young Jane Fonda, all coyish innocence, casting a pert over-the-shoulder glance our way. You cannot see Holsonback in the images at first, but when you do, you won’t be able to see anything else, and the smashed little starlets are relegated to backdrop.

Betsy Lewis is a Dallas writer filled with abstract dread at running into Kardashian foolhardy bitches in the West Village.

I also fear running in to that circus.