The Chupacabrona Tour, Part 2: On South Texas Identity, or The Wild Nudes of McAllen

Basketball season brings out the aggrieved San Antonian in me. I am a Spurs fan, of course. Not a basketball enthusiast, necessarily, but a Spurs fan. This is a congenital condition. It’s brought on not just because San Antonio has no other major league sporting teams to diffuse our ardor, but because San Antonio is so absent from the national media discourse that we invest our NBA excellence with a near-religious zeal. When the Spurs took the national championship in ’99, it felt like a decisive military victory. VNYC Day. For a couple of weeks, the city subconsciously believed that our win would garner us some sort of serious, official national standing. Like maybe we’d get a couple of extra seats in Congress or something. 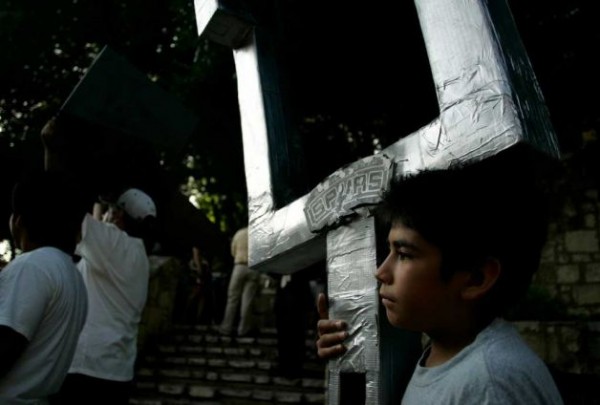 (photo of Spurs fan by Thao Nguyen for the San Antonio Express-News at the 2007 victory parade, see whole slideshow here)

Later that summer, after the smoke cleared a little I remarked to a friend from Brownsville, “I get tired of the national news coverage of San Antonio only being about the Spurs.”

His reply: “I get tired of the national news coverage of South Texas only being about San Antonio.”

San Antonio posits itself as the capitol of South Texas, which makes sense in a lot of ways. Except that many San Antonians don’t know the area at all.  Until recently, South Texas — I mean deep south, even-south-of-San Antonio South Texas — stood as a vast terrain of mysteries unknown to me except via drive-through, word-of-mouth and Freddy Fender. I’m less familiar with the Rio Grande Valley (RGV) than with Massachusetts, for God’s sake, and I’ve only been to Massachusetts four times. I’ve got friends from Alice, Harlingen, McAllen, Edinburg. Most of the South Texas natives I know personally left to go to college, and wouldn’t consider living south of 410. Some of my friends are a little apologetic about their geographic origins, the same way I sometimes was about Texas when I lived in New York, or even about being from San Antonio when I lived in Austin. Just as New Yorkers (who’re as provincial as anybody) stereotype Texans, Texans ascribe personality flaws — particularly machismo, habitual lateness, fatness or whatever seemingly hick characteristics — to people from the Valley and borderlands. There’s an underlying racism and classism. I’ve bristled at this depiction of San Antonio for some time.

Thus South Texas, including the Rio Grande Valley, presents a paradox of being and un-being. It’s physically remote to the rest of the U.S. — except Minnesota (more on that later). But South Texas is larger than the state of New Jersey, with over five million inhabitants if you count the growing cities on the U.S. side and el otro lado. It contains a rapidly-growing economy and a young population.  Yet it’s perceived as either a white-hot wasteland of poverty and narcoviolence, a ranchero backwater of hometown ennui, or forgotten completely. Meanwhile an embattled but emerging consciousness of Latinos and particularly Mexican-Americans continues to rise despite many, many obstacles. The perceived centers of that rise remain, for media purposes, Los Angeles, Phoenix, Miami. Occasionally, San Antonio (thanks, Top Chef). 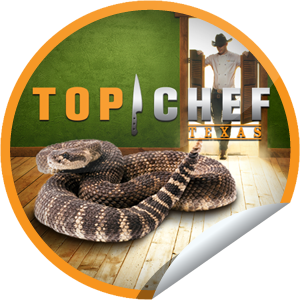 Finally, a television program with the balls to expose South Texans as the rattlesnake-gobbling lot we are. The quinceañera was awesome though.

Demographically, South Texas and particularly the Valley has a higher percentage of Latinos than anywhere in the nation — 81% to Southern Cal’s roughly %41. The South Texas vortex of of state and national media inattention almost amounts to a taboo.

McAllen-based artist Tom Matthews put it to me this way: when they show the map of America on the news, the Valley is hidden under the crawl at the bottom of the screen.

South Texas has been, for 300 or so years,  what the rest of the U.S. is going to look like in a couple of generations— and we’re seemingly the only region of the country that isn’t in a panic about it. Its — OUR — absence on a national scale is absurd. It’s as though the world is collectively ignoring Brazil.

I can’t blame the media; my ignorance is my own fault. I’ve sat in a moving car hurtling through the “Texas Flyover” towards Port A. or South Padre Island. My family, like many other Texas families, used to spend weekends straddling the border, in Piedras Negras, and Los dos Laredos. This imparts a very specific, if not outright false, sense of familiarity. I’ve indulged in endless wistful conversations with other Texans about how Back Then, you could walk over the bridge then amble back to the U.S., shopping bags full of silver and taxidermized frogs playing musical instruments in tow, without half trying. These wistful conversations turn inevitably towards Goodbye to All That, because of Nowadays You-Know-What. I know interior Mexico better than the Rio Grande Valley, which is a whole ‘nother ballgame, too. DF, Monterey, Zacatecas, San Miguel de Allende bear a remote and conflicted relationship with, say, Weslaco or Harlingen. Still, I’ve thought I was ahead of the game for a norteamericana. I grew up in San Antonio, after all, went to Catholic school, speak okay Spanish, have social and family connections with Mexico, etc. I was never encouraged to see Mexico or Mexicans as alien — or no more than inevitably occurs in the fearful American atmosphere.

This is all to preface my  growing romance with the Rio Grande Valley (it’s one-sided, so far, but who knows, it may make me an offer). I’ll write a lot more about this as this tour and this travelogue continue.

The first show I drove down to the Valley for was at South Texas College (STC), a junior college in McAllen. Au Naturale, a group show of nudes by STC and University of Texas Pan-American (UTPA) faculty. I figured it’d give me something of an overview to the kinds of work and exhibition happening in the area.

This is the flyer: 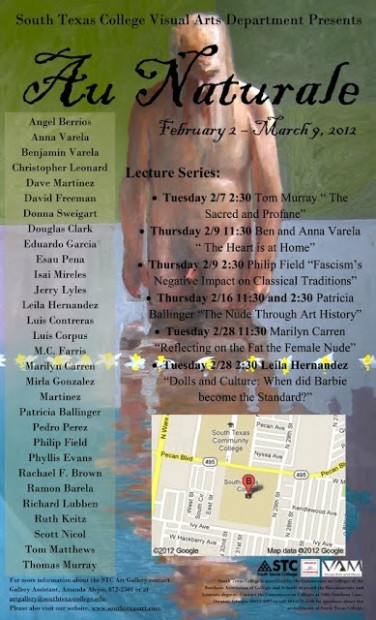 Subtext: "Lots of people involved, it's aboveboard, here's a map, and as you can see from this image, there might see penis but it isn't, you know, porny penis."

And it did — more than I knew, it turned out, as several of the contributing artists have popped back up into my consciousness in subsequent Valley trips. It’s a complex world down there, and I don’t wanna front-load too much. So for this post, I’m just going to show you some of the art I saw, and keep the editorializing to a minimum. 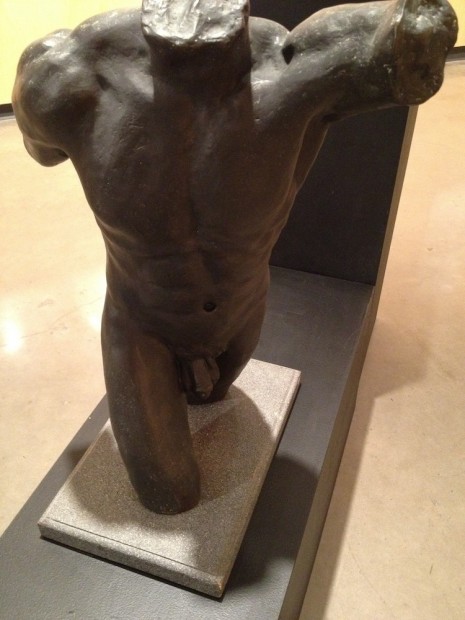 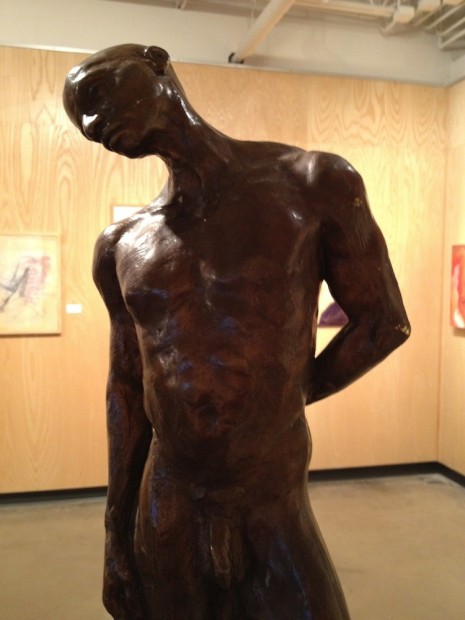 Douglas Clark, "Standing Male Nude" very Rodin's "Burghers of Calais," of which there is a model at the McNay, if you're interested.

These Clark bronzes are well-made, and aren’t, clearly, meant to investigate anything. They’re enjoyable. And really flattering of whomever the subject might be. 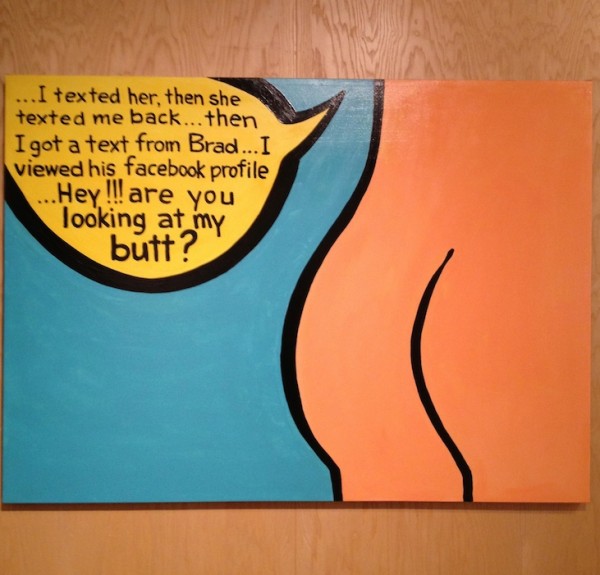 Esau Peña, "Facebook This," Acrylic and Oil on Canvas

I appreciate the simplified blockiness of this, and the sentiment, but as a Lichtenstein-ian rumination, it doesn’t have enough surface, for me. Lichtenstein’s all about reproduction of the texture of the mass-produced, and this is too straight-on, and feels like an approximation. But I do like the humor angle. 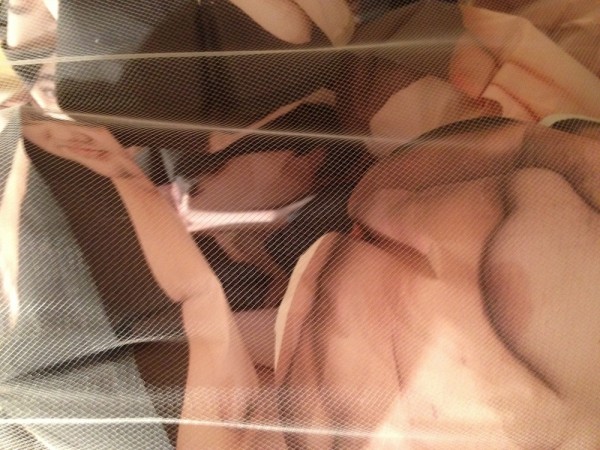 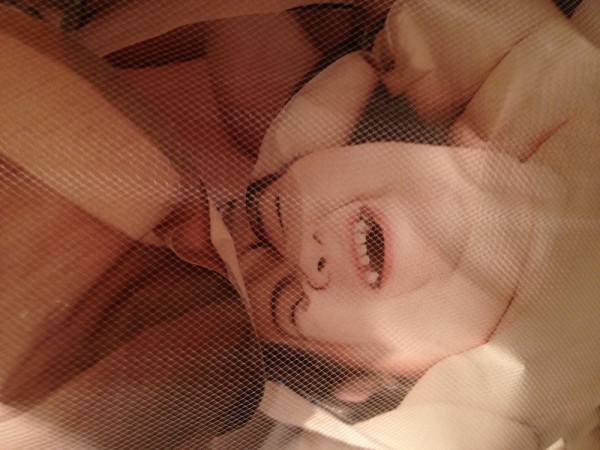 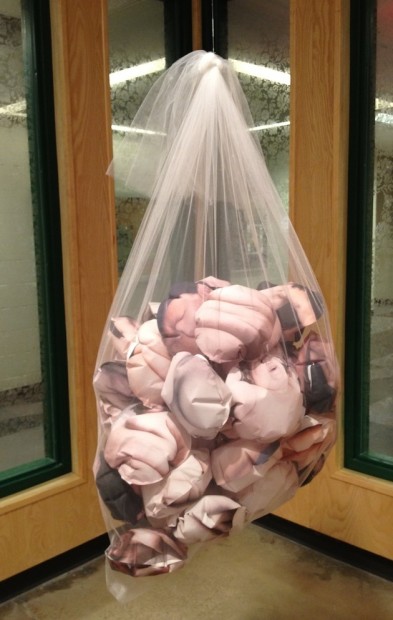 This piece is composed of balloon-like paper printouts of photos of a nude body, all caught up in what appears to be a white mesh delicate-laundry bag. I love this idea. The scale seemed off — I would’ve liked to have seen a greater accumulation of cells, and I felt like the gauze was too present, a distraction. It rendered these very lively units kind of inert. The wall text encouraged the viewer to touch, but the mesh bag intimidated me and didn’t invite touch, in my experience. Because what would it have accomplished? I would’ve liked to pick up the individual cells, turned them in my hands, though. 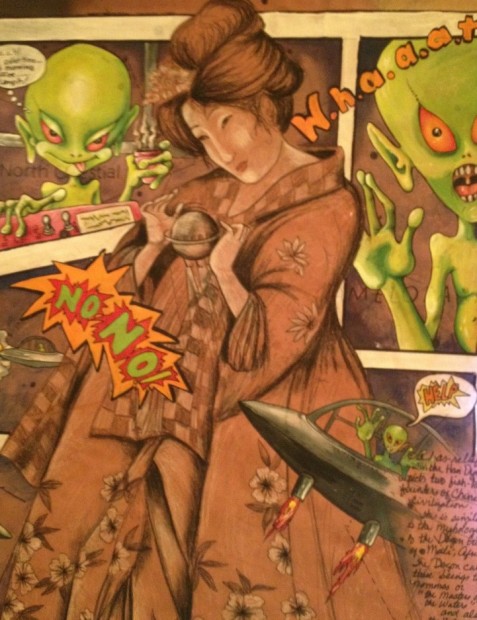 The back end of a multimedia installation by Ramon Barela, the front of which looked like this: 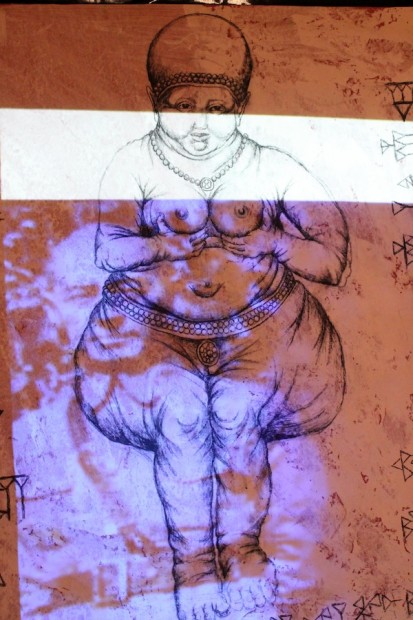 Still of a scrim/drawing onto which a video ids projected.

The scrim is held aloft by monofilament and two of these: 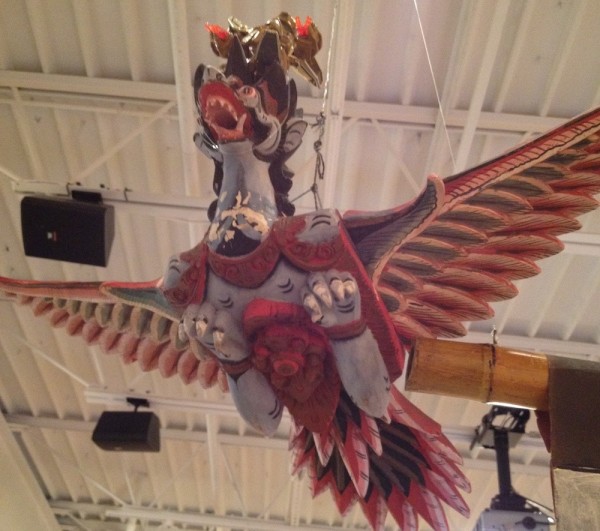 Despite taking up the most visual room in the gallery, I didn’t feel like I had anything to bring to this. There was no primary thrust to it. There’s some mighty fine work there, but I wish the components had been dilated on rather than compiled together. I intuited some philosophical juxtaposition of West and East, but there was a distinct lack of connections. 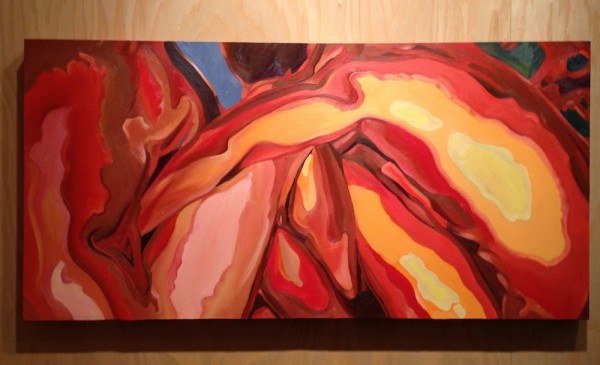 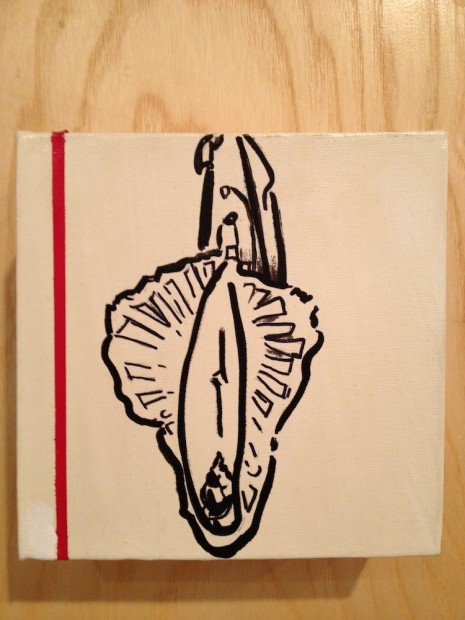 M.C. Farris, "VAGTASTIC VS KUNTACULAR ROUND 1,2,3,4" (title in caps a choice of the artist, I'm presuming --all 4 photos document this piece)) 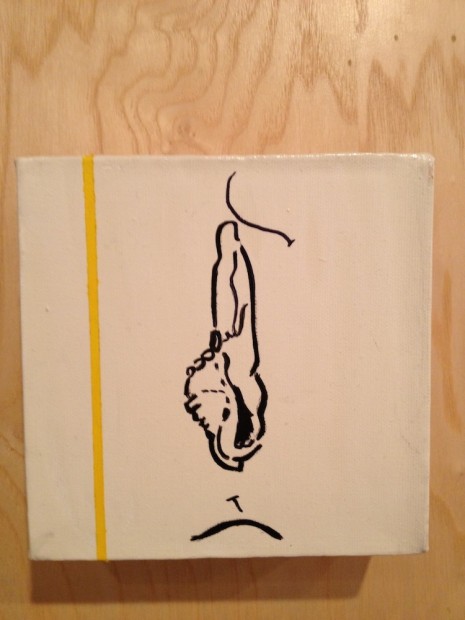 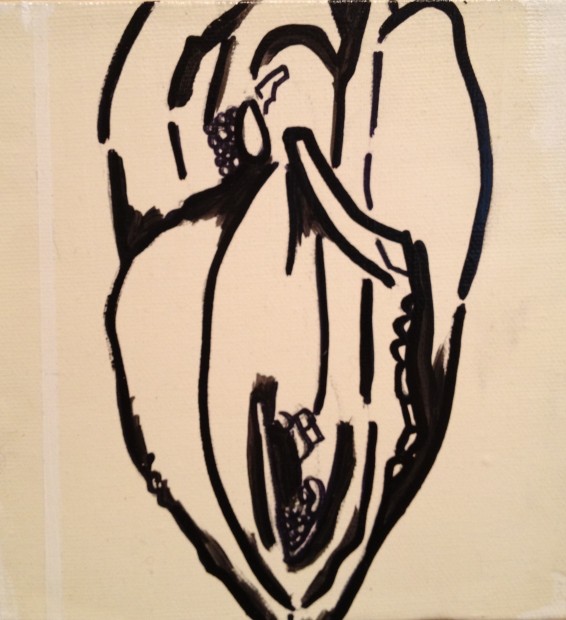 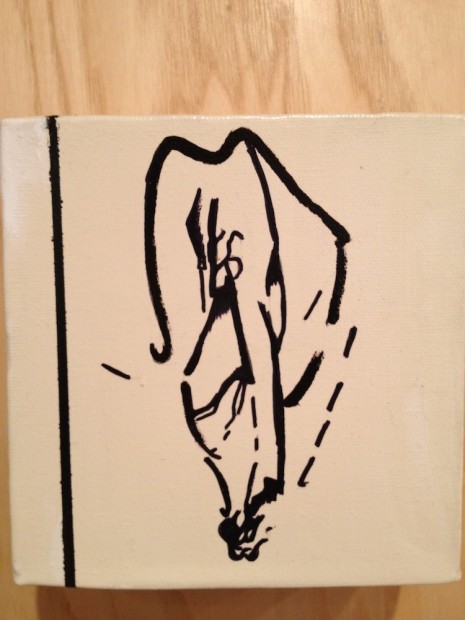 These vaginas rendered so graphically have a fun, design-y kick to them. I like their small scale, too. Due to their unabashed-ness I assumed they were made by a woman. I really dislike the vulgar title, though — one of the very few squicky details of the whole show. Why all caps? I assumed this was due to a sort of super-young-feminist shock value, at the time.

This photo, I love — it’s deceptively simple — how often have we seen the real person mannequin contrast? But there’s a gentle appreciation of the human subject’s gaze, checking out that handbag, this spark of personal interest quite aside from the mannequin — and it doesn’t much matter, except in a  nice compositional way, whether the mannequin is naked. It’s this woman’s desire and interest that are open and accessible without being explicit, at all. The reflected  “one way” reversed sign is a real grace note. Mea culpa: I can’t find the photographer’s name in my notes. I will amend ASAP. 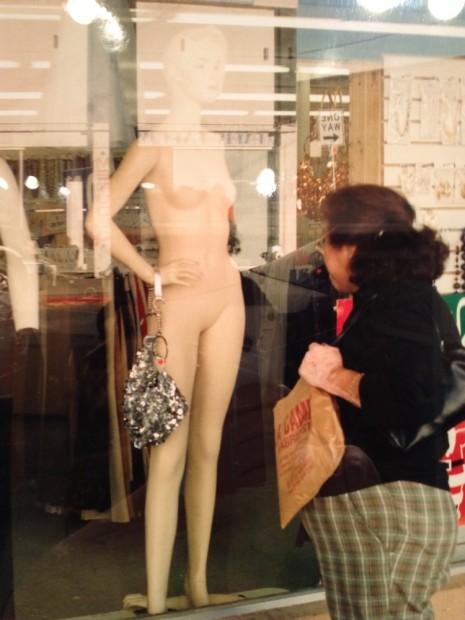 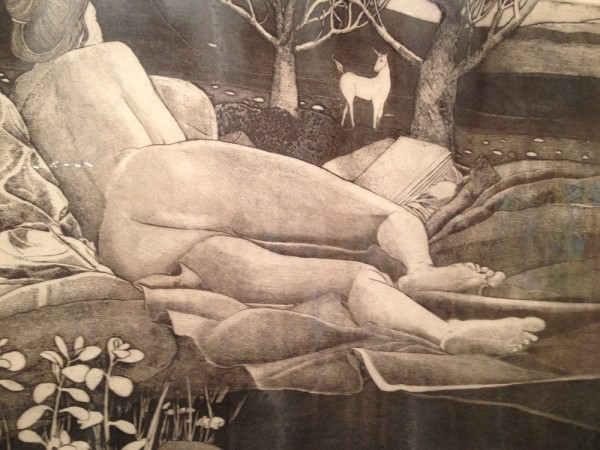 Philip Field, "The Unicorn," Print. Philip Field is an eminent and much respected artist in the region and an oft-cited role model for artists and academics in the RGV. I hope to get to meet him before the end of the tour. I'm attracted to the flat Japonesque handling of this piece. I'm so-so on the actual unicorn. I'm tempted to believe it's meant to be a little funny? The foliage, the figure and the perspective are alluring. 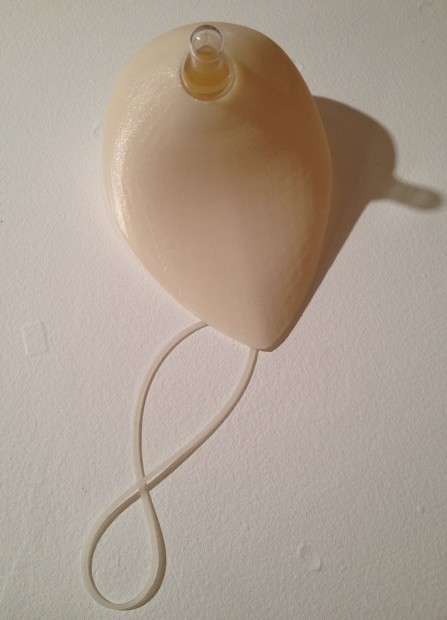 Donna Mason Sweigart, “Dollar Store Nipple,” ABS Plastic, Plastic, Nylon. I know this is simple, but I really, really like it. This piece is a Duchampian readymade for sure, but (like Duchamp) it’s got a humor and wit and grace that makes me smile. It is what it says it is, but retains a beautiful shape. The breast is the first love object for everybody, and this one is more appealing and human than most fake boobs, no? 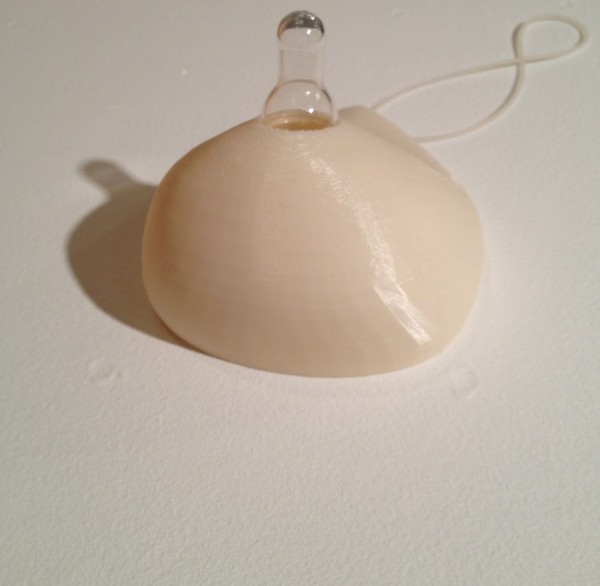 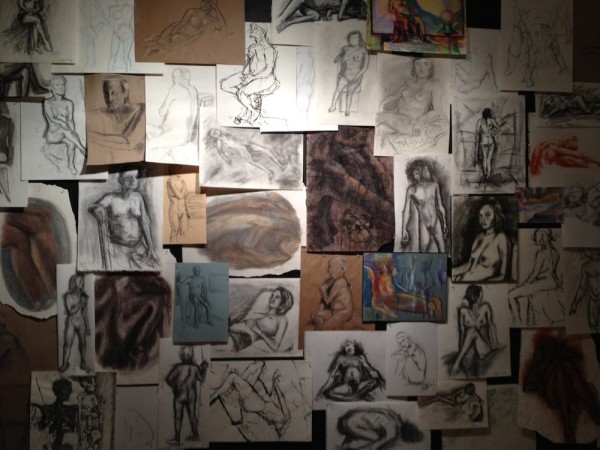 Nude Drawing Collage Wall, which comes off as more than the sum of its parts. There are sketches that are more competent than others, some of which get relatively short shrift by being somewhat covered than the others, but overall it's really pleasing, and intimate, and fun to look at. 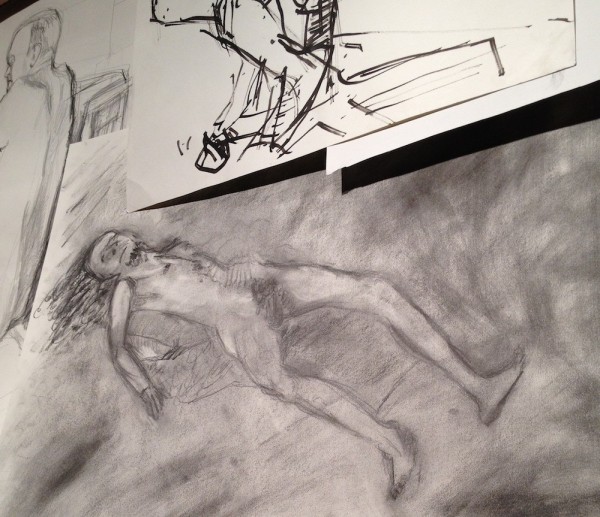 Nude Drawing Collage Wall, alternate view-- one wonders who posed for that corpse pose. That coulda made for a sort of weird life drawing session, which this sketcher has captured pretty capably. 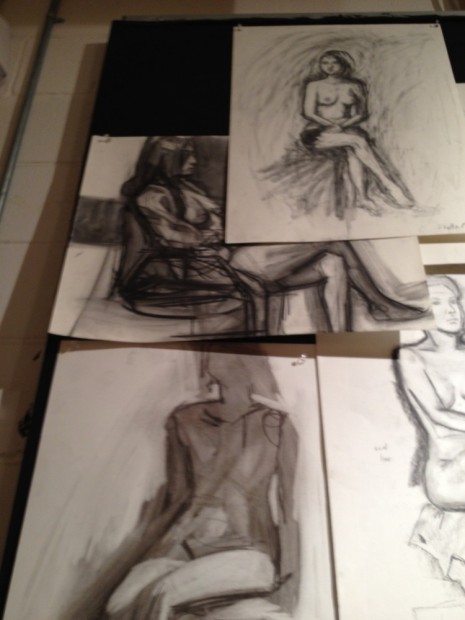 Nude Drawing Collage Wall, alternate view. I like the strong line of top left partially-obscured drawing a lot, though the boxier bottom left drawing has nice proportion and is set into the picture plane with a lot of grace.

I’d gotten an e-mail from STC’s gallery assistant, Amanda Alejos, alerting me to the show. Luckily, she was in the gallery when I went in. In the next post, you’ll hear some of what she has to say.

the two on the left you said you liked are mine. Thanks.