Virginia Overton at the Power Station 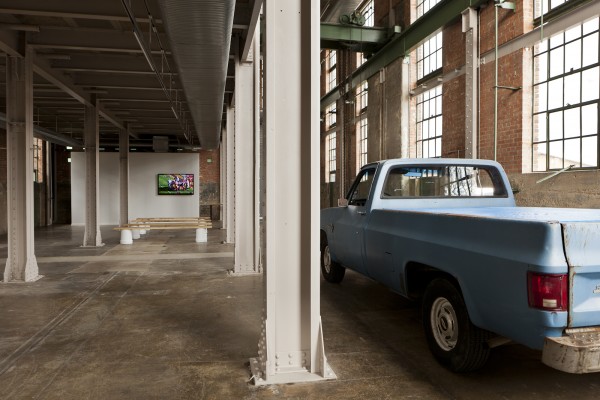 Here are some brief thoughts on the Virginia Overton show, called Deluxe, at the Power Station — my sort of parenthetical reading to Overton’s larger themes here of memory, labor and spectacle.

I was at first, as many were I suspect, a little underwhelmed by Overton’s installation in the space. I guess I was sort of expecting some architectural brace action or mirror tricks or something, like she’s done in the past — something incredibly simple and conceptually driven, while still being enjoyable to look at. I was eager to see what she’d do with the very flexible, light-filled space of the Power Station. But on the night of the opening, while distracted by a hog roast and a keg of beer (not so much drinking it as the idea of a it at a Dallas upper-echelon art opening), I fumbled to grasp the barely-thereness of the actual show. 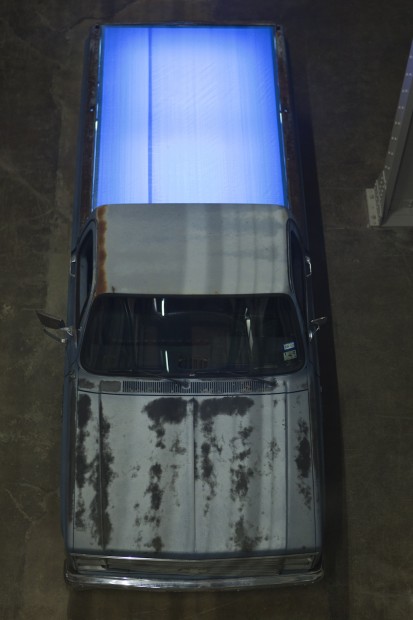 On the first floor, a blue pick-up truck is parked, recalling the truck she once drove through her home state of Tennessee, picking up roadside detritus along the way. The bed of the truck here is lit from beneath a blue tarp that is stretched across it, making the bed like a little, inaccessible room. Across the gallery, planks of wood are set atop white buckets to form benches facing a football game on a TV monitor. And a bass fish truck decal is adhered to the window near the stairwell, barely detectable in the daylight, but gradually revealing itself as the sky grows darker outside. 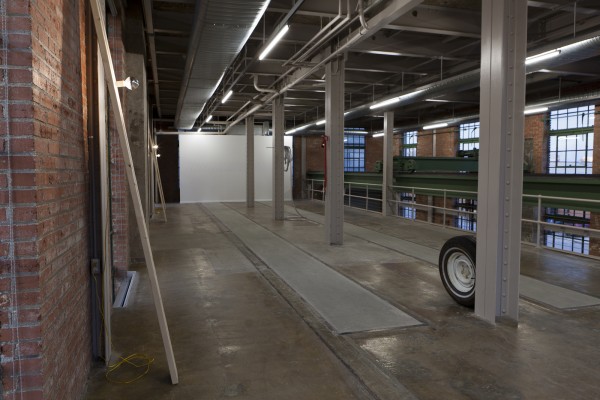 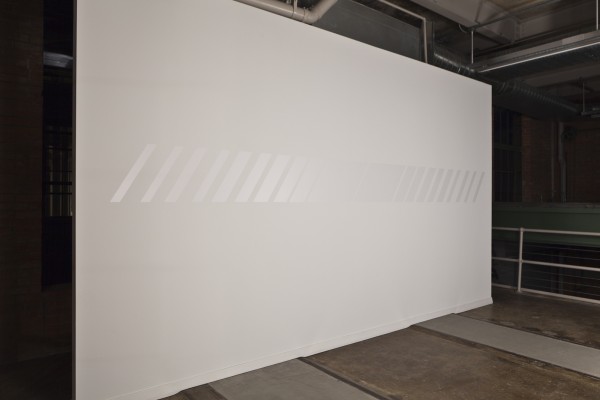 The upstairs space is mildly peppered with hoisting straps that recall seatbelts and plastic tubing that is like a poetic gas-pump, each hung on from the building’s supportive I-beams. A stray car tire is braced in the belly of one of the I-beams, as well. Tall 2 x 4s with functioning lightbulbs are propped across the wall, their light-power also contingent on the darkness outside. On the back wall of the space is an abstracted Chevy insignia, painted white on white, that also looks like tire skid marks or a roadside hazard warning. The glossiness of the painting glints as light travels through the space.

For over a week after seeing the show, I felt, honestly, kind of meh about the whole thing, like Overton had neglected to take full advantage of the potential of the space, and instead had rehashed some of her less interesting ideas about her upbringing in the South — sports, pigs, trucks and simplicity. But the show grew on me, partly because of the things that had first seemed insufficient. But it also occured to me that perhaps, given her oeuvre’s engagement with themes of architecture and the road, that Overton had conceived of the Power Station itself as a vehicle — the building as a car. There’s an interesting pairing in the show — the actual car lit from inside and glowing like a gallery, and the actual gallery rigged with the accents of a car, most of them coming to their full potential as the light within the space strengthens as the sun sets.

It’s a slight observation maybe, but the idea of the art space as a vehicle — a gentle, yet powerful and efficacious machine — was a game-changing approach for me in regards to this work.

The show runs through March 30.

(all images by Kevin Todora courtesy of the Power Station)

Lucia, thanks for the insight. I had friends with me and we were all underwhelmed at the opening, but the exhibit has some sort of gravity that has me continually reconsidering it.