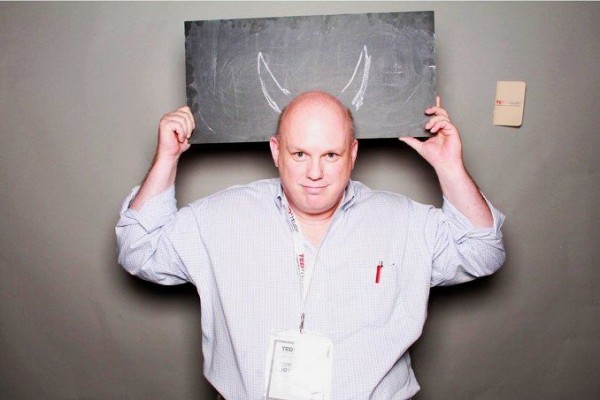 It takes a lot of creativity to make a new idea happen and quite a bit of sacrifice to keep it going. Inspired by Glasstire’s remarkable eleven years on the scene, this series of interviews on sustainable practices will profile artists, writers, and curators who broke out of the box, started an original project, and have managed to see it through for a number of years. Our first installment is an interview with the incomparable Robert Boyd, creator of the blog The Great God Pan Is Dead. He writes constantly, attends most openings in Houston, and has a real day job. How does he do it?

Wax by the Fire: How would you describe your blog and your day job?

Robert Boyd: My blog is my hobby, which is to say it is my passion. (The root of “amateur” is old French for “lover of”) I write about art, mostly local Houston art, but I occasionally touch on other art-related subjects, including the economic and financial aspects of art and art comics.

My day job is as a sourcing specialist at Southwestern Energy (NYSE: SWN). I buy oilfield services. That means requesting bids, negotiating and awarding contracts, and financial modeling for buy-or-build decisions.

WBTF: Do you see your blog and your job as interrelated?

RB: No. My job finances my hobby. That’s the usual way these things happen, though. My co-workers, who know nothing about art, have their own hobbies–restoring old cars, golf, fishing,–that are financed by their jobs.

I have to say that the people I work with have pretty much zilch interest in art. Likewise, very few artists or curators I know have much interest in business–often to their detriment. (I think artists could stand to learn a lot about negotiating, for example.)

WBTF: What sorts of things do you think negotiating skills would help artists with, specifically?

RB: Generalizing, I think artists should recognize when an opportunity to negotiate for a better deal exists. Let’s say you apply for a residency (it could be a grant or an exhibit at a non-profit space). They award you the residency. Great! I think most artists think, well, this non-profit just gave me this great residency–it would be greedy to ask for a bigger stipend or something else I could use. Wrong. They gave you the residency because you’re good and they think you will reflect well on them and it’s their job to give residencies to the best artists they can find. They didn’t give you the residency to do you a favor. Therefore, if you need more money, ask for it. The worst that can happen is that they say no, and you are no worse off than you were before.

It would help if before you go into such a negotiation if you research their finances. There is a useful website called GuideStar, and if the organization you are dealing with is a 501(c)3, you can access their 990 forms. The 990 is what they have to report to the IRS every year. You can see what their revenue and expenses were in the past year, as well as their assets. If they have positive net income, there’s no reason some of that shouldn’t go to you! If their annual revenue is $10,000,000, they should be able to spare another $5,000 for you. But you will never get it unless you ask.

That’s just one example I could give. There are others.

I decided to write about art because I needed a way to goad myself to get out and see the shows. It was a means of getting off the couch. I didn’t expect it to go where it went. I didn’t expect anything, really.

I have always self-published stuff. I started publishing comics in junior high. I published a zine all through high school. I have occasionally published minicomics and pamphlets since then. (I owned a spectacularly unsuccessful publishing/book distribution company for a while.) The Great God Pan is Dead is my largest sustained self-publishing project.

WBTF: What do you do to sustain your practice as an arts writer?

RB: Avoid having a life. Experience parenthood vicariously through friends and family. Don’t have a girlfriend (the right girlfriend would be enough to make me give up The Great God Pan Is Dead, though. If anyone’s interested. Ahem.). I don’t watch much TV. That’s it, mainly.

RB: I am inspired by writers who are really good writers. For example, I’m reading Revolutionary Road by Richard Yates, and his prose style is so damn good. I get this same feeling when I read Don DeLillo or Jonathan Franzen or Donald Barthelme or Doris Lessing or V.S. Naipaul. Many others, mostly novelists. Art writers tend to be pretty bad writers. Thomas McEvilley is OK. Jerry Saltz is witty and amusing, as are Charlie Finch and Mat Gleason. But most art writers are so freaking clunky. It’s as if they consider elegance to be a bourgeois affectation. Plus, art writers often feel the need to inform their readers about this or that philosopher, literary theorist or sociologist that they have read. It’s as if they don’t have confidence in their own opinions. They can’t just internalize this background they have. I hate that. The continual appeals to authority. It’s milquetoast writing. (Then again, my favorite word is “seems” which indicates that I’m a timid hypocrite who is unwilling to say something just “is”. So maybe I should just shut up.) Art criticism is one of the worst literary genres that exists, though not nearly as bad as the artist statement. Which is why I am more influenced by novelists than art writers, I guess.

RB: A long journalistic piece about an episode in Houston having to do with art and politics. I’m not a journalist and have too much respect for great journalism to be willing to half-ass it, so it’s taking a while.

The grammar nazi in me is not happy with the to (rather than too) in the last answer.

Thanks for catching that! It is fixed.

Rachel – can you ask Robert what he would do differently if the passion became his full time gig? Does being a lover of something have to exclude that something financing itself?

I always read Dead Pan by candlelight, while in the bath, savoring each and every finely wrought phrase. No other author in the talent-less world of criticism, no, not even on Blogger, writes with comparable artistry and verve! keep your clunky Poet Laureates and giants of English Letters – give me Boyd!

‘I went to Beaumont with a specific goal, to see the Robert Pruitt exhibit, and with a general goal, to see what the Art Museum of Southeast Texas was all about. I’m used to big city museums.’

I said I admire good prose, not that I accomplish it. You get what you pay for.