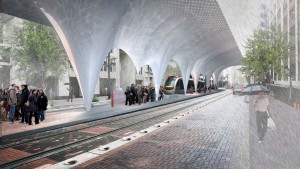 Five big firms from around the country have submitted proposed designs for METRO’s Central Station, to be located downtown between Capitol and Rusk Streets. The proposals have been put on display at JP Morgan chase Bank and at METRO headquarters for “public comment” from January 26-February 10, so hurry on down and take a look! Popular terms include: “futuristic” “over-architected” and “xpectable” but since no consideration will be paid to these comments anyway, sarcasm is encouraged. The winning design will be announced in early March, 2012.