John Cage’s Musicircus at the Blanton 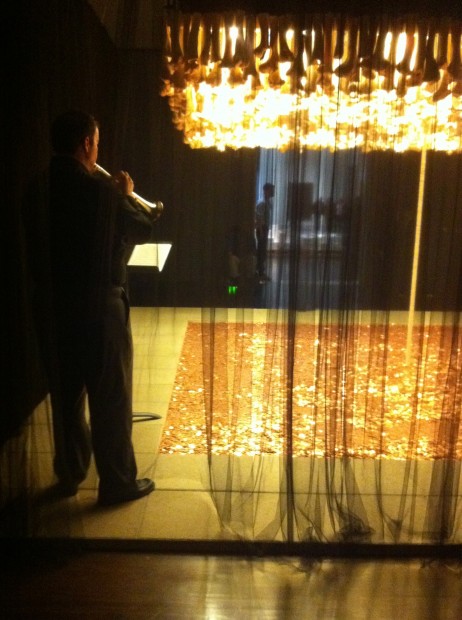 Josh Davies in the Tate Gallery.

This past Saturday was a good day. A lovely day to be exact… In the spirit of John Cage I took a chance and went to the Blanton to honor the man whose 100th birthday is being celebrated this year. Steve Parker, the Blanton Museum’s artist in residence and current graduate student in performance art at UT’s Butler School of Music, organized an elaborate one day only, 2 hour event which re-orchestrated Cage’s 1967 Musicircus. John Cage was a composer, a music theorist, a writer, a philosopher and an artist who not only pioneered non-traditional uses of musical instruments, but also contributed to the development of modern dance in part due to his long term relationship with another favorite of mine, Merce Cunningham. 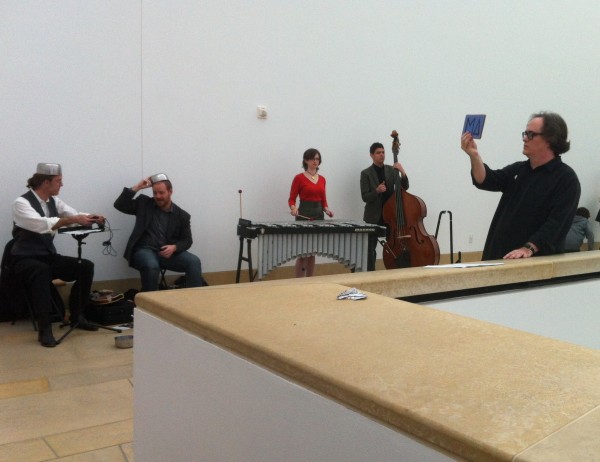 Parker worked in the same manner as Cage inviting a number of musicians, dancers, and performance artists to simultaneously do anything and in any way that they desired. They performed works by Cage, his contemporaries, and other artists directly influenced by the composer. Added to this intentionally was the element of chance. How would the performers relate to each other in the museum space, and how would the audience react and interact as well? At one point while watching Mongoose, an ensemble that did an improvisation based on composer John Zorn’s Cobra, they used flash cards to conduct the music, I was handed a folded note and told to read it then pass it along. It said simply: THINKING IS EASY, IT IS HOLDING ONTO A THOUGHT THAT IS HARD. The man I gave it to shook his head in agreement as if it were originally from me and then passed it on for the next person who would share our shared experience. 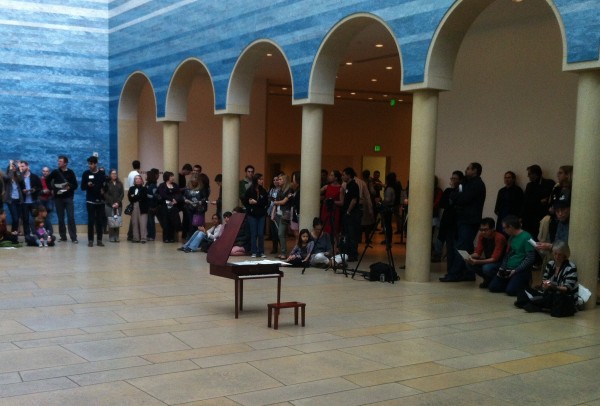 Austin pianist Michelle Schumann played Cage’s Suite for Toy Piano (1948) on a tiny toy piano in the Blanton’s atrium while ballet dancers moved to the composition behind her.  This is not Michelle Schumann playing but it is the composition and if you click play it will be a great background and way to semi experience the way I felt moving through the museum that sunny afternoon.

After Schumann played, I and the rest of the audience began to wander. Stopping to appreciate and then move on, lured by the sounds of another performance happening in another part of the museum.  I listened to Steve Parker play his trombone, as well as East Side Arkestra which is a Sun Ra tribute band, the Bel Cuore Sax Quartet, the New Music Co-op  and then I heard Adam Groh play an amplified cactus. In all, there were more than 50 performers in attendance. 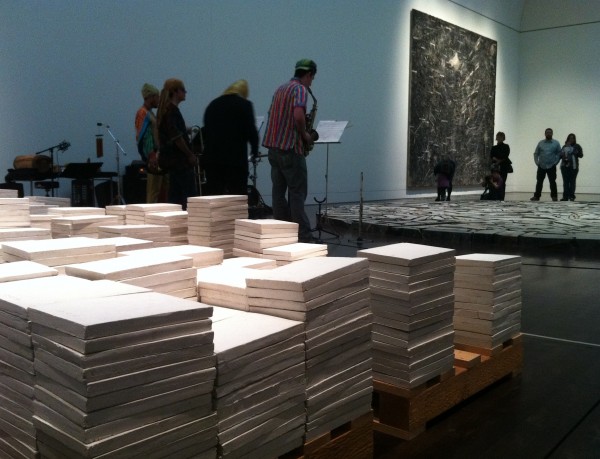 East Side Arkestra in front of Richard Long's Summer Circle

It was exciting to see so many people and varying ages. Thoughtful smiles and expressions of surprise quietly meandered through the cacophony of sounds. Together with Parker and the other performers we all made a space, generally known for its static paintings and sculpture, come alive in a dynamic tribute to one of the most influential American composers of the 20th century. 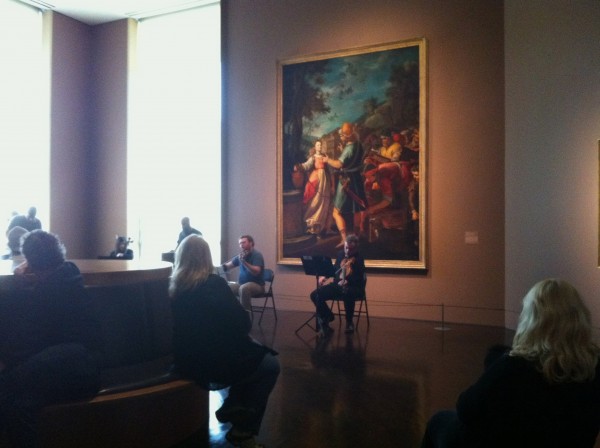 And I couldn’t leave you without seeing the man himself, in action, at his best. Ladies and Gentlemen, Mr. John Cage! Enjoy.

Thanks for the great article. A quick correction: the photo labeled as “New Music Co-op in front of Richard Long’s Summer Circle” is not the New Music Co-op. We are in the photo below that one, with the bright windows and large Baroque painting. Thanks!

FYI: The group playing in front of the Richard Long installment is the East Side Arkestra.

Thanks so much for the correction Brandon. I wanted to give everyone credit but must have mixed up names as I tried to connect the written program to the actual moment I took the photo. I’ll correct asap.
It was a wonderful day! Much thanks to all the performers.

So glad you liked it–I thought it was pretty magical too!