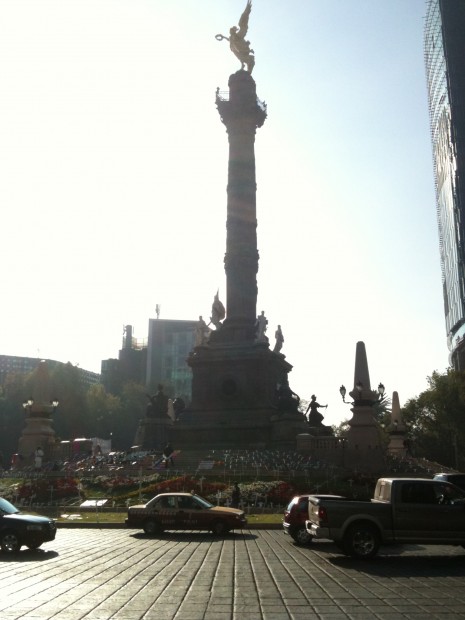 This year is an election year in Mexico.  This election will be a pivotal one for the entire country.  I was living in Mexico City when the current president, Felipe Calderón was elected to office in 2006 with an extremely controversial win that left most demanding a recount (sound familiar to everyone stateside?) and a citywide protest that lasted more weeks than I can remember, which then resulted in the city closing down miles of Reforma Avenue from the Angel of Independence all the way into downtown and the Zocalo Plaza. 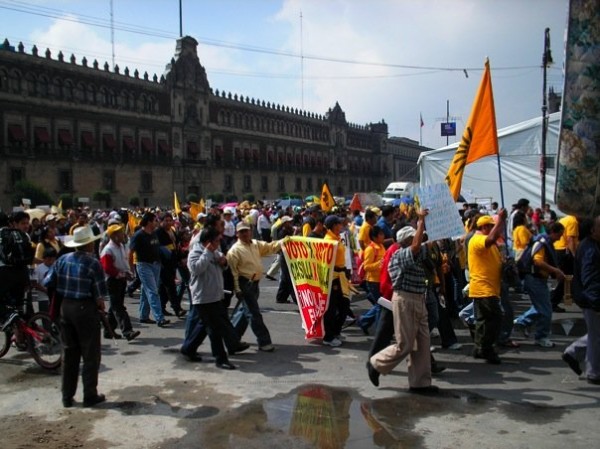 Protests in Zocalo Plaza in 2006

These landmarks make almost no contextual sense to non-Mexicans.  Rest assured, that it was a big deal.  Imagine a protest staged at the same time at every major historical landmark in Washington DC and you might have some idea.  The closing of Reforma Avenue shut down transportation in and out of downtown, affected the major international embassies in the area, and interrupted commerce all along the avenue which is considered the most beautiful and historic avenue in all of Mexico, and some say the Americas (for more see this article at MSNBC).

The elections of 2006 were my first eye opening experience with just how vocal Mexicans can be against injustice.  Even more, Mexico City is known for the strong voice of its citizens that more often than not projects itself into protests that are centered around powerful images that are jarring yet effective. 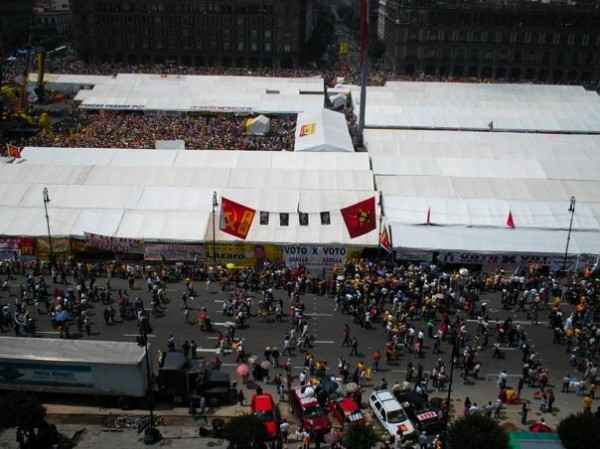 Since his inauguration in 2006, president Felipe Calderón has declared a bloody war against drug cartels throughout the country, causing an escalation of violence that many believe is now beyond the government’s control.  Nearly the entire country is paralyzed by fear as the violence continues to escalate to the point of crisis, and the drug war has become so complicated it’s impossible to sum up in one blog post.  Death tolls have reached an estimated 50,o00, though some are now saying 60,000.  These deaths are both narcotraficantes and innocent citizens along both the border and interior of the country.  In the past six years the drug war has only contributed to the country’s reputation of violence and extortion, securing a spot in the international mentality as a place to avoid altogether.

When I moved back to Mexico this past summer  of 2011, I was astounded by yet another massive protest against the legislation of Calderón in the Zocalo Plaza.  When I revisited the Zocalo for the first time I emerged from the underground subway in the middle of the plaza and onto a maze of red and white painted stones opposing Calderón and the drug war.  There was no crowd, no people marching or chanting, and the people milling about the plaza were merely enacting daily commerce.  The painted stones had obviously been left from the protest a day or two before, or perhaps served as the protest itself in an act of silent defiance.  The silence, however, was loud enough.  On each stone was written a personal account of how the drug wars and violence had affected the inscriber, or the exact sentiment they projected onto Calderón.  It was obvious that people were angry, indeed it was written on almost every stone.  As I walked through them I read the insults directed at Calderón, at his cabinet, and the corruption which many think he has continued to feed. 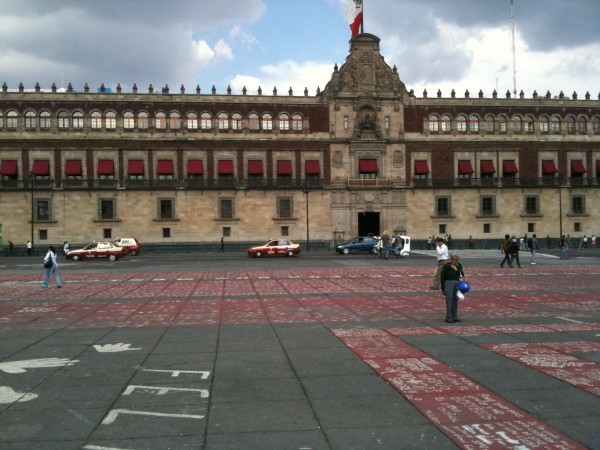 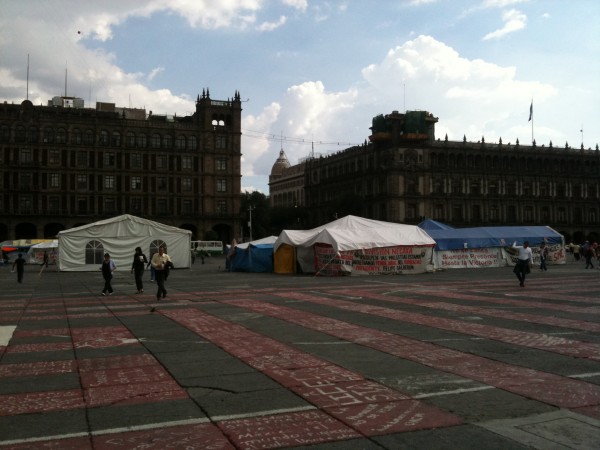 Aside from the obvious, escalating, and sad situation that the country finds itself in now, the images of protest are numerous.  No matter the occasion, Mexicans find an opportunity to protest against the violence with imagery so effective that it is heartbreaking.

And without a doubt it is obvious that Calderón has reached the ranks of one of the most hated figures in Mexico. 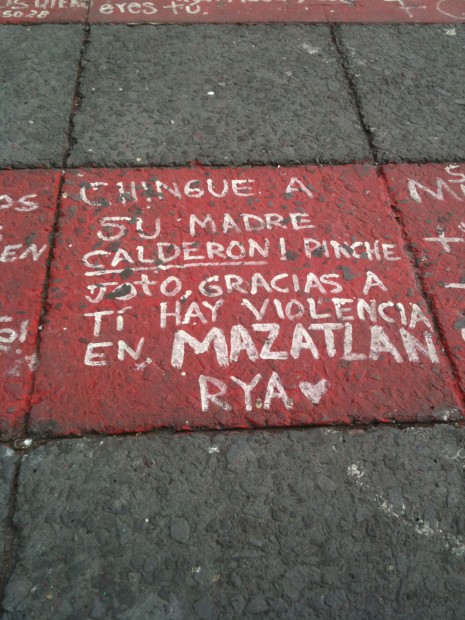 Detail of Anti-Calderon protest in the Zocalo Plaza, summer 2011 (for translation see *below)

As the violence continues to escalate, and the election continues in full swing, Mexicans continue to make their voices heard, especially in the most significant of festivals like Day of the Dead.  On the morning of November 1st I was walking down Reforma Avenue and stumbled upon the Angel of Independence filled with thousands of crosses and small altars that had been constructed to commemorate the mothers, fathers, children, and extended family members that had passed on as casualties of war and as a result of both government and drug cartel violence (indeed, with all the corruption in the country no one really knows who to blame anymore).  Some crosses had names written on them, some had photos taped or glued to them, many remained anonymous, and all were painted white.  Yellow, red, and purple marigolds were interspersed between the crosses, and the smell of copal smoke hung in the air as indigenous priests blessed some families who had come to pay their respects.  After a short time I watched as a community prayer ensued, orchestrated by the eldest of the priests, and was repeated in all four cardinal directions.  The prayer was a heartfelt and genuine call to cease the violence gripping the country and to reunite as a national brotherhood.  Day of the Dead had taken on a whole new national significance where it became obvious the toll the drug wars have played.  The entire scene left me stunned and nearly in tears on the steps of the Angel of Independence. 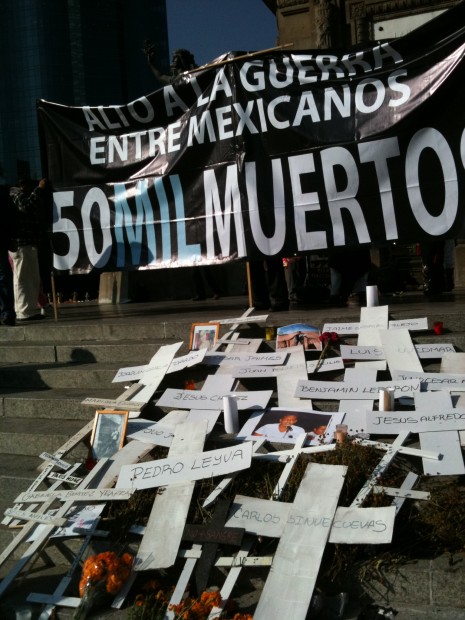 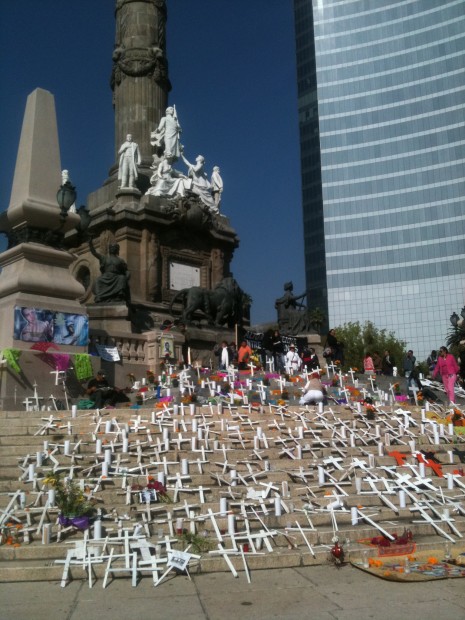 As the country is thrown into a moment of crisis, fighting for its own safety and security against a corrupt government, a country torn into a near-civil war, and an election that will determine the next decade of international and national security, the sentiment is that everyone is crying out for immediate change.  Visually it is everywhere, in every festival, important government office, and on the faces of families who have somehow been affected by the crisis in some capacity.

In the meantime, these protests go far beyond protest signs being carried by individuals.  These protests are personal, profound, and make their way into every aspect of society.

Indeed, it will be interesting to see what the next few months brings.

*Image translation: F**ck your mother, Calderón! F**cking f**ggot, thanks to you there is violence in Mazatlan.

Unboxing the Game of Campaign Politics

It should be noted that the demonstrations of ’06 and ’11 are connected by the fact that Calderón’s commencement of violence was largely a cynical response to his perceived illegitimacy as president.

Thanks for your article and your Glasstire reporting on Mexico. I wrote a piece about the violence in Mexico that sums up a lot of my feelings about what’s going on. The piece was a response to Texas author Cecilia Balli’s piece in Harper’s about the violence in Juárez. I think it is crucial to connect the dots about this violence. People in Mexico are angry with Calderón because his government is clearly involved in perpetuating and furthering the violence and human rights abuses.

Great article–interesting observation that Calderón’s term in office features protest at the beginning and the end. What would seem to be most disheartening is that the unpopularity of Calderón’s perhaps well-intentioned, yet surely poorly executed war on narcos is likely to lead to the victory of the candidate of the PRI in the July presidential election. The PRI represents all that is undemocratic and is responsible for the initial proliferation of drug trafficking in Mexico.

Thanks for the comments!

I should note that I am not at all an expert on the nuances of the political happenings, but do understand the general sentiment. Right now Chilangos (Mexicans living in Mexico City) are saying they wish things could just go back to the way they were, implying that the war on drugs should never have started in the first place, and maybe it was just better when everyone turned a blind eye to what was happening. It’s a sad state of affairs indeed.

The 2006 elections and protests really resulted in a loss of Obredor supporters since so much of the city and its commerce was effected. In this case the protests really blame Calderón for the violence in the rest of the country for his badly planned attack on the narcos.

However, all that said, what I am really, really interested in are the images that are coming from the political situation, and these are what I would really like to focus my attention on. Mexico has a very strong visual culture, and that is reflected everywhere, and political protest is absolutely no exception.

And do not forget that some of the Calderon’s responsibilities is to allow the USA interference in all about their “drug war”. USA is directly co-responsible because their immense internal drug market, weapon selling and with its banks which accept money from narco. Calderón has permitted to operate USA agencies in Mexico and has followed the “rules” of the “drug war” declared in USA. We need a president who think in mexican people, not in the interest of other country.

Its true, the U.S. has a huge responsibility in this drug war, however, both sides are incredibly messy and sticky. It also doesn’t help that the Mexican government is extremely corrupt and in the past has been known to do business with the drug lords. That changed when Calderon began attacking drug lords directly rather than trying to start from within the infrastructure of the government and change the culture to one that is unaccepting of bribes, etc. The result of Calderon’s ill fated war have been casualties on both sides of the border, while the U.S. continues to demand its narcotics.

Another thing to consider is that Mexico is a massive country with a huge amount of geographical diversity that actually makes cultural divides and customs much more prolific. My Spanish is very different from northerners, history, customs, culture and way of life is generally extremely different in the interior than in the north. That being said, I can only speak for what I see, encounter, and talk about here in the interior.

However, what I think is really interesting (and even more now from the dialog) is that no one has mentioned the images associated with the protests. They are all powerful and heartbreaking. I think its sad that we can’t let the country stand alone in its visual art and creativity without focusing on the politics and narcos.