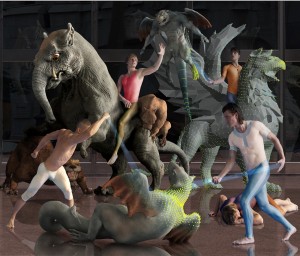 Every other March, swarms of photographers and photo-related exhibitions swamp Houston’s art scene, and 2012 is one of those years: Fotofest’s 2012 Biennial focuses on Contemporary Russian Photography, blanketing the city with 200 Russian artists in seventy exhibitions.

Globe-trotting FotoFest founders Wendy Watriss and Frederick Baldwin are collaborating with Russian curatorial team of Evgeny Berezner and Irina Tchmyreva and Natalia Tarasova to curate three must-see exhibitions that aim at rediscovery of a little-known part of Russian photographic history between the constructivists and the latest international art stars.

The shows will cover fifty years in three big bites: After Stalin, The Personal Voice Re-emerging, the late 1950s-1970s at the Williams Tower Gallery; Perestroika, Liberalization and Experimentation, the late 1980s-2010 at Winter Street Studios and Spring Street Studios, and The Young Generation, 2009-2012 at FotoFest Headquarters, featuring some finds from Fotofest’s just-finished portfolio review event in Moscow. These exhibitions are accompanied by a special exhibition of Soviet photojournalists who were winners of World Press Photo Awards from 1950–1991.

Together, the shows will literally write the book on Russian Photography: FotoFest is co-publishing the two-volume 500-page 2012 Biennial Catalogue with  Schilt Publishing (Amsterdam, The Netherlands) later in 2012 in English, German and Russian. It all happens Mar 16 – Apr 29.