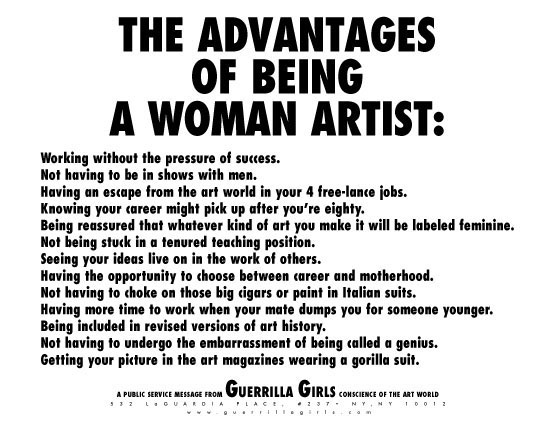 Guerrilla Girls, "The Advantages of Being a Woman Artist," 1988, poster

Last Friday night, “The Deconstructive Impulse: Women Artists Reconfigure the Signs of Power, 1973-1991 opened at the Contemporary Arts Museum, Houston. In it were some of my favorite Guerrilla Girls posters. It was nice to see them but it was also kind of ironic.

2011 was the (unofficial) “Year of the Guy” at the CAMH. Men were the only artists who got shows – seven solo shows out of the nine total exhibitions in the museum. The 27-artist group show “The Spectacular of Vernacular,” had nine women and the downstairs Teen Council-organized show probably had some girls. I don’t know, I missed it.

Guerrilla Girls, "Do Women have to be Naked to Get into the Met. Museum?", 1989, poster

On top of the seven all-male shows, James Surls got to put a sculpture on the front lawn. The program was also almost exclusively white male, with the exception of Clifford Owens who is African American. As far as I can tell, the only other diversity was in the sexuality of three of the white guys. 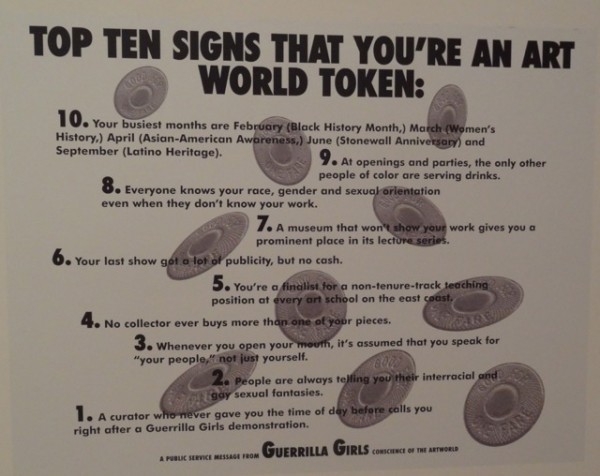 There were a lot of great shows at the CAMH last year. I don’t begrudge any of those guys having their work shown. And I don’t think institutions need to pass out exhibitions “one for you, one for you, one for you…” in some heavy-handed and patronizing agenda of inclusion that carefully schedules an Asian woman artist one month and a Latino guy the next. I also understand that scheduling shows is complex and that the timing isn’t always in the museum or the curator’s control. (To the CAMH’s credit 2010 had a much more diverse range of artists including two – downstairs – solo shows of women.)

But this is half the freaking population we’re talking about. There hasn’t been a solo show of a female artist in the CAMH’s upstairs main gallery since Mary Heilmann in 2007.  What’s the deal?

So now after the “Year of the Guy” we get a group show of women artists who make art that deals with women’s issues. It’s not that it’s a bad show but coming on the heels of the all-male year, it just reminds me of the nineties when practically the only time African Americans, Asians, Latinos, women or anybody not a white male got shown was if their work dealt with their identity – and then only in a group show about their identity.

I don’t think the CAMH has some nefarious anti-woman agenda, I just think they’re like a lot of other institutions. The fact remains that, in spite of the huge numbers of talented women artists out there, those Guerrilla Girls posters are still true.

FYI, Re:Generation included lots of art by young women. I especially liked the pieces by Faith Pruneda (whose work was also a standout at the 2010 Bayou City Art Festival), Jessica Vega, Justine Ditto and Alyssa Hansen. I hope to see more work by these artists in the coming years.

Also amongst derelicts, criminals, and the homeless, but no one gets worked up about that.

DId the Ben Patterson show spill over into 2011? A year really isn’t long in an exhibition schedule, but as far as great contemporary art goes there seems to be more gender balance than ever. Let’s hope that starts to be reflected at CAMH. It is still awesome to see Jenny Holzer and Carrie Mae Weems. I think this show has a lot of great work in it.

“Deconstructive Impulse” does have a lot of great work and it’d be great to see solo shows from some of those artists as well. 2010’s Ben Patterson and Barkley L. Hendricks retrospectives presented some amazing work from under-known African American male artists. The CAMH has a good track record of strong and diverse shows, but they’ve been light in terms of main gallery solo exhibitions for women. The CAMH did just email that “Jane Alexander: Surveys (from the Cape of Good Hope)” will be in the main gallery this summer.

Well said, Kelly. The last two years have been about the “boys club” at the CAMH. And then this? Geez- it does feel like the ’90’s again, and not in a funny Portlandia kind of way.

Whenever I read an article like this, I want to ask the writer, “How would you have done it differently?”
Which shows would you have nixed, and whose work would you put in its place?

I don’t think it’s about getting rid of any of the shows. It’s about spreading things out and allowing other artists into the mix.

Personally, I could have lived without the Clifford Owens, Marc Swanson and Glenn Fogel shows–but my least favorite of the year was The Spectacular of the Vernacular. But that’s just me. YMMV.

After I moved to Houston in 2005 I was so excited and pleased that the CAMH regularly gave solo shows to great women artists: Kiki Smith, Pipilotti Rist, Mary Heilman. Then it stopped. What happened?

I have a penis, but I’ve never been in a show at CAMH or CAMFU. I thought a penis made it automatic. Please let me in (pun intended).

http://kellyklaasmeyer.com/?attachment_id=202
Quite frankly, no, it couldn’t be worse than your pieces.

Well said, Kelly. Another member of the Boys Only Club is the Station Museum. The place has been up & running for 9 years, &, as far as I can tell, they have never given a woman a solo show.