“The Fashion World of Jean Paul Gaultier: From the Sidewalk to the Catwalk” at the Dallas Museum of Art 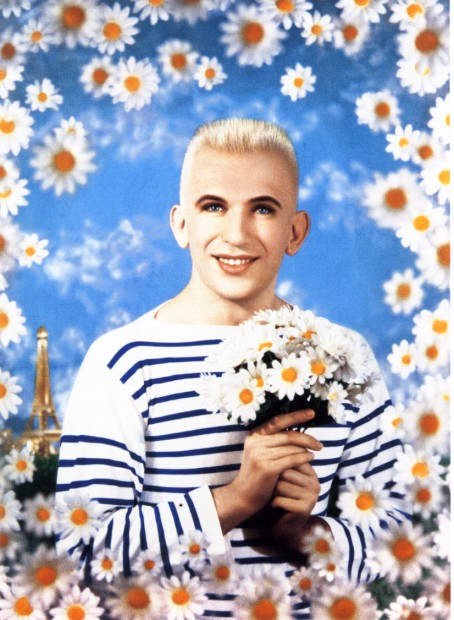 I was prepared to hate the Gaultier exhibition at the DMA. I have a complicated relationship to fashion. I studied fashion design and merchandising at Pratt Institute in New York. When I realized that instead of designing couture under my own fashion label, I’d most likely end up designing underwear for plus-size women, I switched from design to merchandising. Three years and three jobs later, my final straw was working for a woman who must have been related to Glenn Close’s character in “The Devil Wears Prada.” During my “AH-HA” moment, I questioned the importance of skirt length and whether anyone cared if beige was the new red. It wasn’t like I was working to end world hunger.

Cynical me questioned whether a fine arts museum was an appropriate venue for The Fashion World of Jean Paul Gaultier: From the Sidewalk to the Catwalk. Cynical me also wondered whether the exhibit was another example of corporate funding dictating programming while serving to promote corporate sponsors.

While I still have those questions, the exhibition itself is smartly curated, well designed and entertaining. Embracing uber-spectacle, the galleries feature 35 years of Gaultier’s work. What makes the show different from a traditional fashion exhibition is the theatricality of the installation and the inclusion of visual culture ephemera. 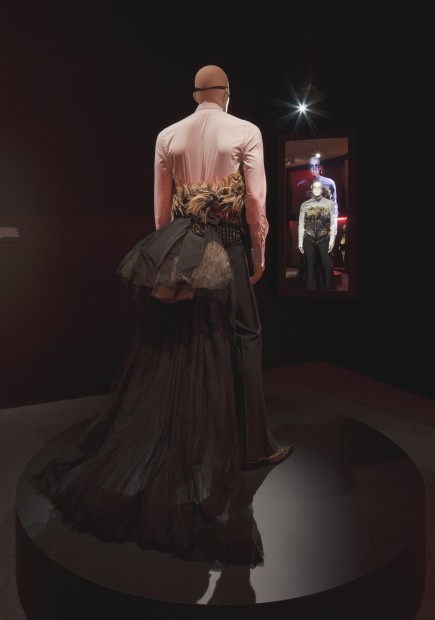 Serious money went into the production of the exhibit. 30 HD video projectors project talking faces onto mannequins. The “talking mannequins” are creepy in the best possible way, but I couldn’t help but think it is a major rip-off from Tony Oursler’s video work. Designed and staged by a Montreal firm, there was no mention of homage to Oursler in the press release.

In the first gallery, moving blue lighting gives the illusion of being underwater. A gold mermaid dress comes to life, as the mannequin’s face begins moving and talking. This room’s theme is sailor and angel attire. Most disconcerting is when the mannequins, depicting bleeding madonnas (as in the mother of god, not the pop singer) break out in song. Unfortunately the Gaultier look-alike mannequin in the room talks so loudly, he drowns out their angelic music. 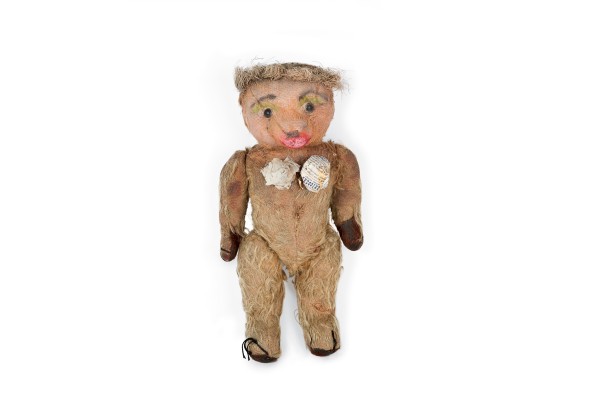 The SKIN DEEP gallery features a narcissistic talking mannequin and skin dresses. Whoever named this gallery likes puns and probably has a sick sense of humor; it’s my favorite room in the exhibit. The dress that I can’t get out of my mind is the body stocking printed with a pattern of flayed flesh. Worn by French singer Mylene Farmer for her 2009 tour, it looks like something from a Body Worlds exhibit—simultaneously revolting and strangely beautiful. Displayed on the same platform is a “capillary” printed dress and a skeleton corset made of jet beads embroidered on silk velvet and satin. This room focuses on some of Gaultier’s more outrageous S&M-wear designs.

The talking narcissist is dressed in Gaultier’s 1996-7 Modern Man Collection, wearing a lace-corset bustier adorned with cock feathers. He is talking to his reflection (which is actually another mannequin reflected in the mirror). The mirror image gives advice such as “Your image is a game. Be fluid and free.” This work epitomizes Gaultier’s innovative gender-bending designs. 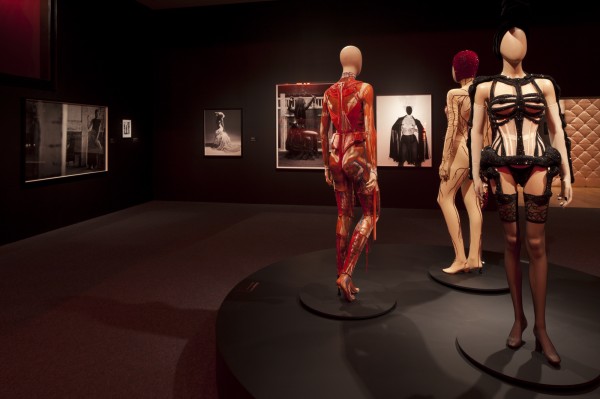 Dallas-based graffiti artist Jerod DTOX Davies for Blunt Force Crew/Beastmode Squad painted the walls of the Punk Cancan room, which contains a number of punked-out mannequins. Mannequins move down a runway rotating in the center of the room. Jazz music plays. The environment reminds me of a theme park ride gone awry.

Multiple monitors playing music videos and film clips fill the walls of the sci-fi Metropolis gallery. I wasn’t aware of Gaultier’s prolific costume designs for films and dance, among them, Pedro Almodóvar’s most recent 2011 film The Skin I Live In. My favorite dress from this collection is a satin-edged, acetate film-covered corset with a film stock printed pattern on a crepe georgette sheath. (Yes, the corset was made from actual film negatives!) The elegantly designed, fragile dress speaks to the vanishing analog technology and the need to preserve archival footage.

In many ways the last gallery, Urban Jungle, is the most controversial. PETA protesters could have a field day over the crocodile-skin jacket or the fur covered tote bag on wheels. The most stunning design is a taffeta gown with a leopard skin. Upon closer inspection, I noticed that the leopard skin is actually made of thousands of embroidered beads. The label says it required 1006 hours of labor. A nearby feathered dress only took 167 hours to make. I wonder about equating labor with the value/worth of the garment. I also wonder who is spending 1000+ hours beading and sewing—certainly not Gaultier. 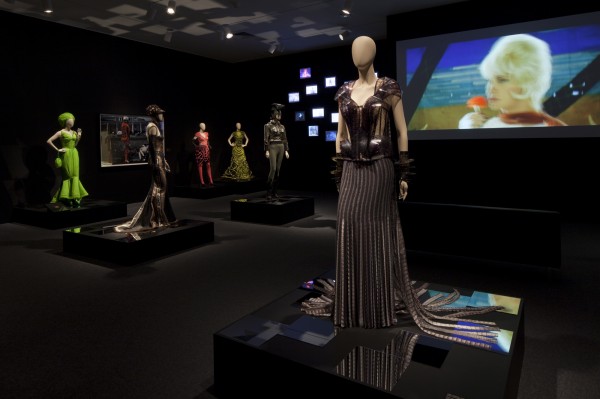 On display at the DMA next to the Gaultier galleries was the African Headwear exhibition. The sculptural headdresses created from leopard teeth, claws, feathers and colorful shells are not just decorative but part of elaborate cultural and social rituals. Unlike Gaultier’s designs, they are meant to function beyond spectacle. However, both share formal elements of sculptural design and beauty. I’m sure it wasn’t an accident that the two exhibitions overlapped, especially given some of Gaultier’s African-inspired designs.

MoMA‘s 2004 exhibition Fashioning Fiction in Photography since 1990 featured both artists and commercial photographers who produced commissioned photographs that were subsequently published as editorials or advertisements. In thinking about the fluidity between art, photography and fashion, it is interesting to note how Gaultier’s work transcends the runway. His designs appear throughout visual culture, whether it is in Madonna’s music videos, Interview Magazine or films such as Luc Besson’s “The Fifth Element” or Peter Greenaway’s “The Cook, The Thief, Her Wife & His Lover.”  The many examples of fashion photographs, concerts, performances and film clips are one of the exhibition’s strengths. By broadening the context beyond the history or chronology of a particular designer, the exhibit shows how fashion permeates every aspect of contemporary visual culture (in this case, Gaultier’s enormous influence). 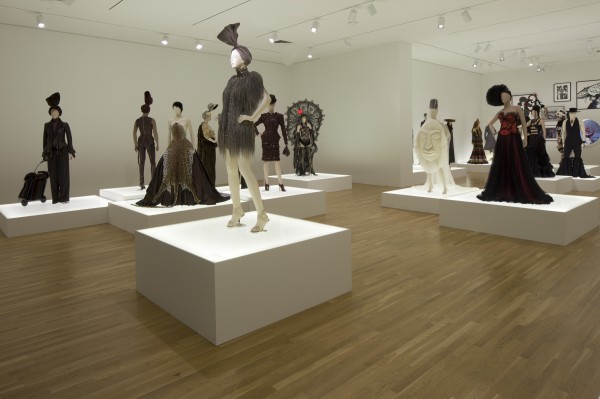 Back to my original questions. In thinking about venue—is a fashion exhibit appropriate for a fine arts museum? The DMA has a curator of Decorative Arts and Design and fashion certainly falls under the category of design. This is the DMA’s first fashion exhibition and is one of only two U.S. venues. (The show is slated for San Franciso’s de Young Museum in March.) The Montreal Museum of Fine Arts organized the exhibition, so many of the scheduled venues are art institutions.  The European locations include Madrid’s Fundacion Mapfre, the Kunsthal Rotterdam and Stockholm’s Arkitekturmusset.

In terms of corporate funding, Cadillac is the major sponsor. However, I didn’t see any mannequins lounging on Caddys in the exhibition, so I don’t think they were overtly promoting their product. The corporate sponsorship of the arts is a much larger discussion outside the realm of this review. Suffice it to say that we should be happy that an American car company actually still has money to support the arts. Go buy a Caddy.

Judging by the museum crowds, this show definitely boosted the DMA’s attendance. Many people that I spoke with had visited more than once. If the show draws in folks that ordinarily wouldn’t go to a museum, even better.

The Fashion World of Jean Paul Gaultier: From the Sidewalk to the Catwalk
The Dallas Museum of Art
November 13, 2011 – February 12, 2012

Bob–you are right! Thanks for the clarification. I must have been confusing Cruella de Ville with Devil Wears Prada–both great characters.

Saw this over the weekend. Spectacular and very inspiring. Agreed that Oursler needed some mention.

Rainey,
I missed you at Barry Whistler gallery by a few minutes. Hope to meet you in person next time you are in Dallas.