Earl Staley is Back, and Blogging. Robert Boyd Saw Him! 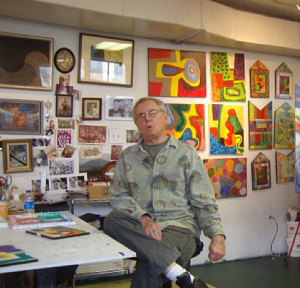 Protean and prolific Houston painter Earl Staley is back in Houston, after his decade-long sojourn in Santa Fe, reincarnated as a slightly grayer figure in a white guayabera, panama hat, and black eyepatch. Robert Boyd, of The Great God Pan is Dead visited him at his studio over Art Supply on Main, and reports on Staley’s ups and downs (with photographs). Apparently Staley’s cutting up his old paintings and painting over them! But it gets worse: according to Boyd, Staley is divorced, no longer represented by Moody Gallery, his longtime Houston dealers, and has started blogging! His most recent post, on November 2, is grim, yet fascinating: titled “The Professor gets older by a year” it’s is sort of self-critique of a some of his earlier works combined with how-to photos of their destruction and remixing. 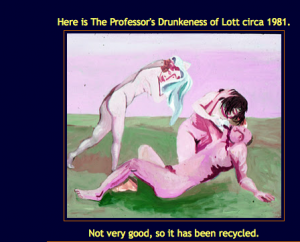 Earl Staley’s work is really great. It looks fresh and exciting. But I will personally pay him $50 to stop writing his blog in the third person.

How about in second person, like “Bright Lights Big City”?

“You look at the painting you did in 1981. ‘Why did I ever think this was good?’ you ask yourself. You grab the scissors and start cutting. You smile as thirty-year-old canvas fragments flutter to the floor. New painting ideas are already swirling in your mind.”

Wow, from the photos the originals are were way better that the patchwork recycled numbers. Earl, stop cutting stuff up!

Robert, I’ll settle for that. But I won’t pay as much. And Kelly, I originally was horrified at the cut-ups but then I thought some of them were definitely better, like the Winged Mermaid, for instance.

I’m delighted to see that someone is writing about Earl’s new work and new life. He’s having a great time, but I agree with Kelly that I wish he would not cut up some of his earlier myth paintings.

I also visited Earl in his studio a few weeks ago. I applaud his efforts and am happy to that see he is making all kinds of new work. The small paintings he is making in class, while he is teaching, are also wonderful. All I can say is, his energy and enthusiasm for his practice are inspiring. Go Earl!