The Real Artists of Marfa/Foundation for Jammable Resources is four guys who moved to Marfa about five years ago; one from Alpine, one From Marathon, one from Austin, and one from California, just as the budding service industry supporting the budding art/industrial complex began requiring more educated low-level employees than the local population could supply. Like many other small-town service workers, they’ve decided to shake things up by forming a band. They played some parties, cut some capers, and, it being Marfa, their underground activities have been reported in the NY Times. 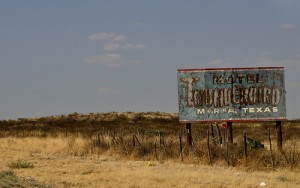 “Interesting ” like everyone else in town I would say ,but “hip” is a curse word.. One guy is a chef, one is a restaurant manager, one is an artist, and one a computer maestro at a hyrdoponic tomato plant.