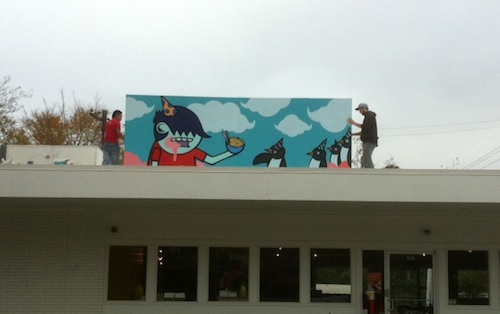 A new  mural by ACK! has appeared on top of Jenni’s Noodle House in Houston Heights. The 14 foot rooftop billboard is semi-advertising, featuring a drooling boy  offering noodles to penguins in birthday hats. Like Gonzo247’s recent St. Arnold Brewery mural, the piece applys street-art style to commercial signage, for which ACK!, with his bright, decorative color, appealing cartoon characters and penchant for narrative is particularly well suited. The temporary holiday decoration will remian on view  until sometime later in January.

A New Art Beer for Us All