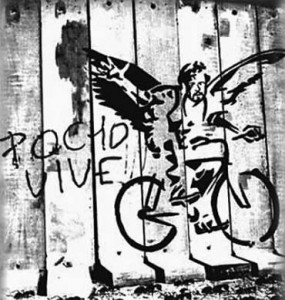 I had to think long and hard about what to title this blog. I’ve never been good with titles, and this was certainly no exception. It also presented the interesting challenge of describing in two short words the nature of what I would be writing. While I am living and working in Mexico City, and writing about its visual culture and contemporary art world, I am also still very tied to my native Texas and everything that I have worked to build there. Indeed to say that I am stuck between two very different and interesting worlds is an understatement, and I feel this relationship every day that I am in Mexico. That is not to say, however, that I am complaining. I love the cultural clashes that I encounter daily.

I learned to speak Spanish fluently while living in Mexico City. However I am completely incapable of writing academic or critical texts in Spanish. I encounter the tiniest moments of inexplicability daily on the street and write about them in English while I question them with Mexican friends in Spanish. I do not think in translation, indeed I can switch between languages easily and fluidly, but I can’t write in English while listening to Spanish music in the background, and vice versa if a song in English starts playing at a bar I become totally befuddled. Inevitably things can get a little confusing. It’s my thought process, however, is the most confusing. My inner monologue happens in both languages at once, it’s a mixing and butchering of both languages that I am incapable of controlling.

I never mix English and Spanish together when speaking. I would be horrified if I stated a phrase that was half Spanish and half English, or pocho, a term used as an endearing insult in the interior of Mexico to define the mix of languages that us gringos call Spanglish. While I am capable of controlling which language comes out of my mouth with an uncanny mastery, I am incapable of controlling the languages that all my thoughts function in. It’s undeniable that I am a product of two countries, and I live balancing the customs, sensibilities and cultures of both. As a result, my thoughts or pensamientos occur in two languages and I’ve learned to let them go in all their pochoso glory.

Hence Pensamientos Pochosos, the title I stumbled upon while talking with a good friend about what language we think in. Here are my thoughts, the clashes I stumble upon, the art world as it exists in Mexico, and the difficulty and love that exists the package called life in this giant city.

You Should Go To Mexico City