Back of the Envelope: Speculation on the Economic Impact of an Art Fair 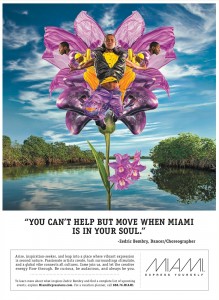 In the wake of Miami, it seems an appropriate moment to address the economic impact of the art fair. Just before Art Basel and its myriad satellites opened last week, Miami Dade County Newspaper took up the question in “The Art Basel Effect” and concluded yes, for Miami, it worked. Between 2002 and 2010, revenue from the average Miami-Dade hotel room grew 51%, and in December alone, it grew by 79%. Equally importantly—and probably contributing to this kind of revenue growth in the travel and leisure industry—the fair has provided the city with a new image that allows it to appeal as a travel destination to HNWIs and culturati—the Visitors Bureau started a new “Miami Expressions” ad campaign featuring artists in 2008. The fairs have enabled Miami to rebrand itself as an (albeit commercialized and slick) culture center and boost its tourism industry. So, what about for the rest of us, what are the economic benefits of something like the Texas Contemporary in Houston? 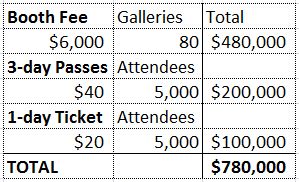 Total Revenue from galleries and attendees (sum of above): $780,000

(For a more conservative estimate, if ArtMRKT broke even this year, with 55 galleries (if all of them paid) and steeply discounted tickets for many attendees (say ½ paid full price, the rest got in free, and of those who paid full price, ½ were 3-day pass holders and ½ were 1-day ticket holders), the dollar value of the money spent to produce the fair in Houston would be lower—about $360,000.)

If I’m representative, out of town guests due to the fair have the following spending patterns (i.e. mine):

With 50% of 10,000 attendees coming from out of town, these kinds of spending patterns would result in:

Houston needs to renew its image to attract a younger crowd and transform the energy industry on which it depends (if Houston doesn’t stay ahead of the curve in this industry, other cities will be more than happy to grab it.) In this respect, the long term value of a high profile contemporary art fair and the art scene more broadly could be immense. Just look at Miami.

My back of the envelope calculations suggest about $2 million to the Houston economy from the Texas Contemporary at its current size. (As a reference point, Houston’s 2010 GMP was $403 billion.) There is a lot more to be gained, though, if the fair grows in profile. Houston has a vibrant art scene on which to build, so why not? I’m hopeful ArtMRKT can shake things up.

An interesting argument, relative to the dissing that Basel/Miami has taken in comments on other blogs.
Is this the way that Houston wants to celebrate art, attract a younger crowd and maybe even help the economy such that it could create new jobs for all of those poor schlubs out there who can’t afford to jet from one expo to another?
From the standpoint of commerce, this kind of project may be sustainable for the near future. From the standpoint of morality, it sucks. Unless there’s another way of doing expos that offers a real way forward for artists who aren’t the Hursts and Chapmans of the world, dealers who aren’t the Gagosians of the world and collectors who aren’t the crowd that C. Saatchi was whinging about in his recent article.

One problem with this calculation is that it doesn’t take into account opportunity costs. Think of art sales, for example. Art sales at either of the Houston art fairs benefit Houston directly with sales tax. But unless the sale is from a Houston-based gallery, the non-tax portion of that money exits the Houston economy instantly. Let’s say that there were $1,000,000 dollars (before sales tax) of art sales at the HFAF. The state gets $62,500, Houston gets $10,000, and Metro gets $10,000 from sales tax. Let’s say that each of the 80 galleries sold an equal share of art–$12,500 (pretax) per gallery. And let’s assume 8 galleries were from Houston (10%). So of the sales, $100,000 were spent at Houston galleries. Sounds great, right? Except for one thing, opportunity cost. Of that $100,000 spent at Houston galleries, $50,000 was spent by Houstonians (because 50% of the attendees were tourists). If the hadn’t spent this money on art here in Houston, they might have spent it on something else in Houston. And if that’s the case, the economic impact is a wash.

The same can be said of any expense incurred by a Houstonian at the fair. The $10 someone paid for a ticket might have been spent going to a movie at 13 Pews–an economic wash. The $15 someone spent for the (horrible) convention food could have been spent at Star Pizza. In short, we can’t count all the revenues as pure economic benefit for Houston because that money may have been earmarked to be spent in Houston whether or not there was an art fair or not.

Where the real benefit comes is from the spending from tourists. After all, they probably made a choice to visit Houston because of the art fairs. Their spending is a real bonus for Houston. But the spending by Houstonians at the the art fair can’t be counted as excess spending in Houston, since they very likely might have spent that money in Houston anyway.

Numerical analyses are misleading, unless they are based on real numbers, rather than assumptions. The real number version of this article would be very interesting. This is just guesswork.

1. It will take a few years for the Houston fairs to establish themselves as worthy of an out of town trip so don’t judge on first year numbers.

3. Many if not most of the fairgoers were at a fair for the first time. The fairs create enthusiasm for collecting and also for joining arts groups which were featured at the TX Contemporary. It also provided networking for Houston art enthusiasts who knew each other but didn’t realize they had a shared interest in art.

5. It takes months after a fair to measure sales that where the first contact occurred at the fair.

6. The fairs raised the visibility of contemporary art to the general public and that’s a good thing.

Thank you, Bill Goldberg. A positive without accounting. Robert Boyd, you have planted the needed seed as big Bill D has pointed-out.

Why is it always so trendy to negate, sort-of Roberta Smithish. NYC champions their local showing brands. Art Fairs do open doors for lesser than blue chip. Maybe we could have some balanced, scholarly analytical reviews (without obvious favorites puff) accentuating what is pluralistically home grown; AND, finding strength from non-profit venues, from empire to hole-in-the wall, recognizing, more calendar-wise, Houston has more than a few local brands. These Art Fairs certainly caused some healthy networking to accomplish recognition of Houston as a fertile land of makin’ and showin’ art.