Three years ago when I returned to Houston from art school, I went to a talk for Project Row Houses’ Summer Studios. While there, I saw this tortilla press for tortillas in the shape of cartoon white bread and it made me happy to be back home and excited about the art being made here. I couldn’t remember who the artist was or anything other than the mental image of this humorous, simple object with a complicated meaning. 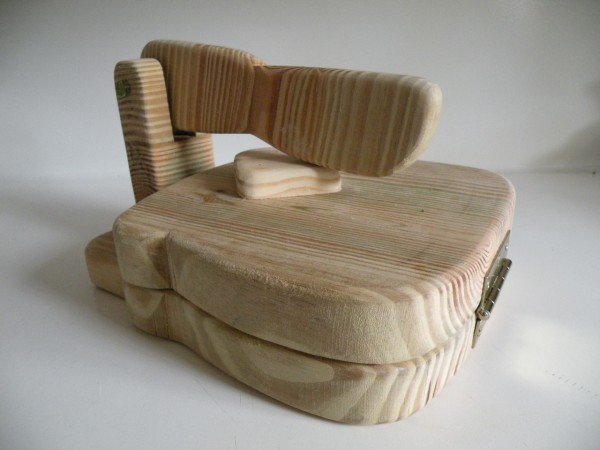 Fast forward to three years later at Pan Y CiRCOS at PG Contemporary’s next-door pop up space. El Dinersito, a hybrid of Mexican taco cart and American diner, reminded me of American Bred, and curator Robert Boyd was there to attribute both pieces to the artist making tacos for everyone: Jorge Galvan. 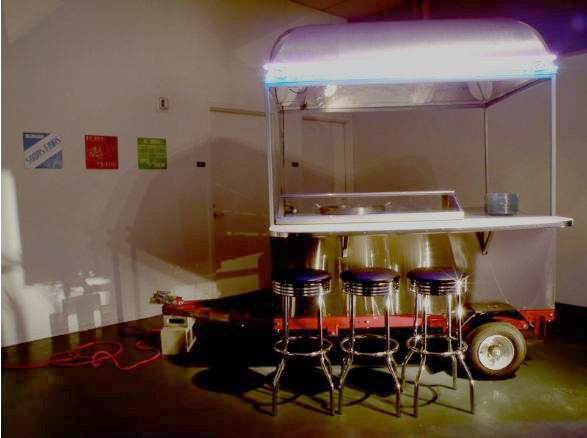 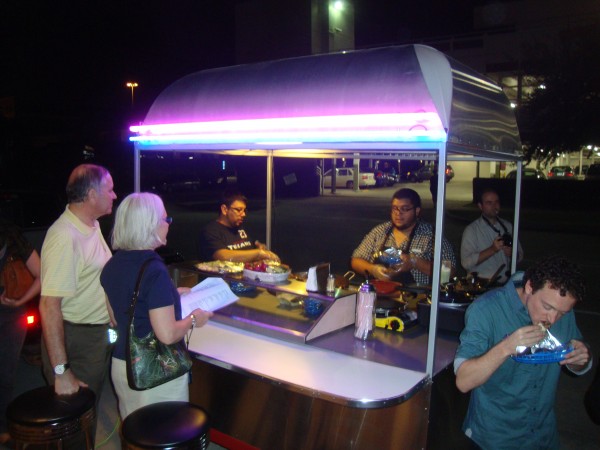 Galvan is only 26, a very recent graduate of the University of Houston. He came to the States from Mexico when he was three and grew up in a jungle gym house that grew with his family. What began as a one-bedroom house was constantly added onto by Galvan’s father. He used each addition as an opportunity to pass along carpentry and construction skills to his son. Galvan remembers these lessons fondly and makes a point of continuing to use them in his own work.

I should mention that Galvan does not look at other artists’ work. He will not write down the references that you give him, purposely not remember any examples you mention. He will not look at images of an artist’s work unless he already knows them and their way of working. He prefers hearing artists talk about their process to seeing the end result. Galvan feels that, for him, researching other artists is limiting and inhibits making work that is original and authentic. So if you are reading this Jorge, stop right here. While I would love for this post to get the word out about your work, I would hate for it to get in your way.

Galvan’s conscious use of stereotypes loads meaning into succinct, well-crafted objects that embody paradoxes. I can’t resist drawing a parallel from Galvan’s subversive work to the mythological trickster.

The Trickster is a culture jamming archetype found in mythologies worldwide who subverts hierarchy, dwells in liminal space and rearticulates ossified joints. Through humor, games and mischief the trickster acts as a catalyst that reveals truths and realigns the relationship between the sacred and the common. Think of that kid in school who always broke the rules in such an elegantly clever way that teachers would relax the rule rather than reprimand the kid. In the contemporary art world I think of Francis Alÿs, Gabriel Orozco and Erwin Wurm. You can tell me if you think Galvan fits here or not, but it is not a bad tribe to belong to. 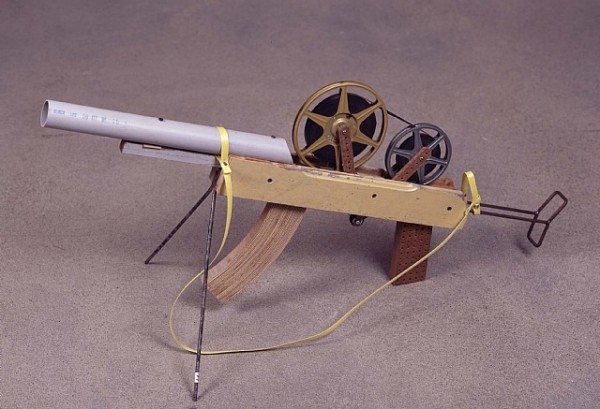 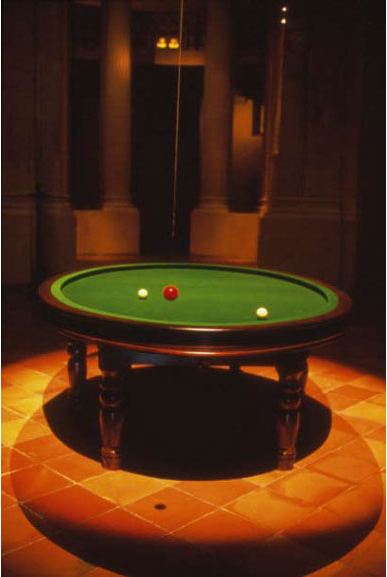 "Carambole with Pendulum" by Gabriel Orozco, 1996 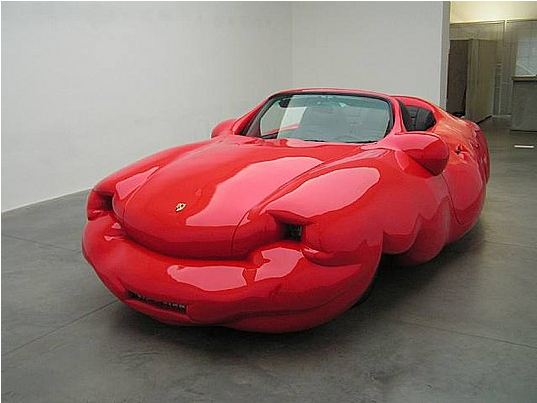 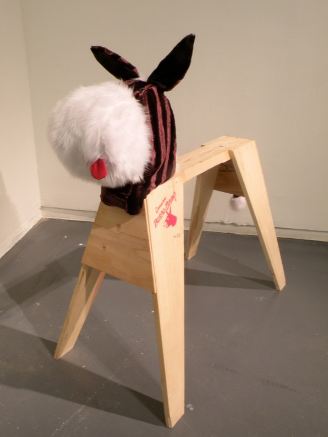 In addition to using objects that have connotations or uses outside of art, a lot of  Galvan’s work has that surreptitious “haha……what?!” moment. While for Galvan, Burro recalls tender memories of growing up building his own toys, it also packs in undercutting connotations of child labor. 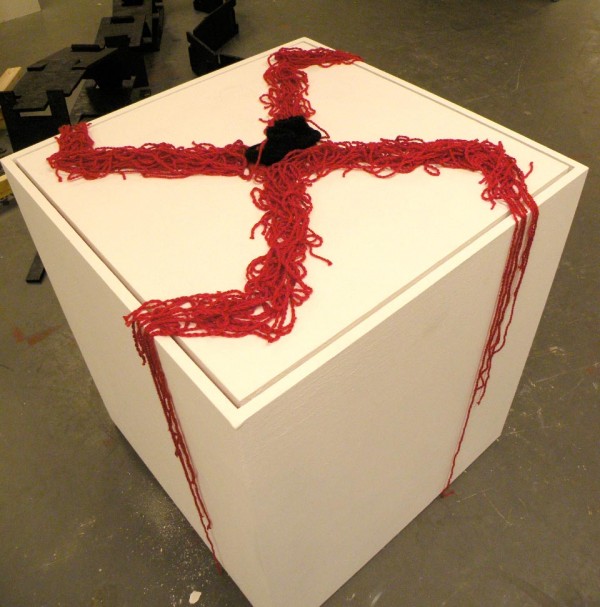 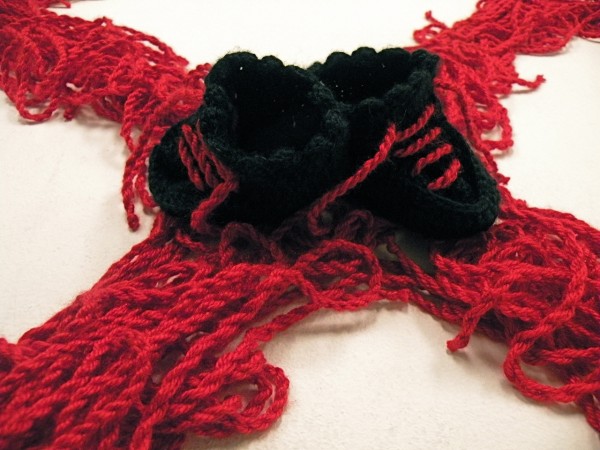 Also recalling childhood, in Red Laces (earned by neo-Nazis when they kill someone)  Galvan laces baby booties with red baby shoe laces and drips them outward in the shape of a bleeding swastika. The work is striking to the point that Galvan cites it as the moment he decided to aim for the funny bone instead of the gut.

Echoing the floppy humor of an Oldenburg, Police Car Cover is a functional object designed to make any car resemble a cop car so that you can park wherever you want. The laughable object makes a caustic statement about authority. 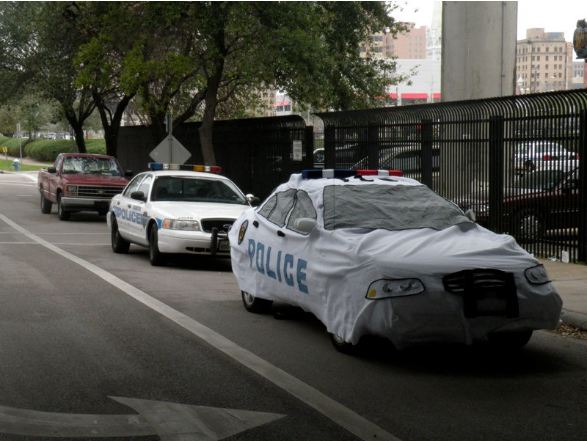 Galvan’s détournements are the products of a reductive process, paring down the material voices to eliminate misreads but still allow for a variety of interpretations.

Living in Houston, we’ve all learned the requisite components of a Tex Mex restaurant: warm adobe, folkloric artwork, sombreros, hanging chiles. In Not For Sale, Galvan reads these symbols and combines a traditional art form, papeles picadas, with the triangular flag banners ubiquitous at car lots. 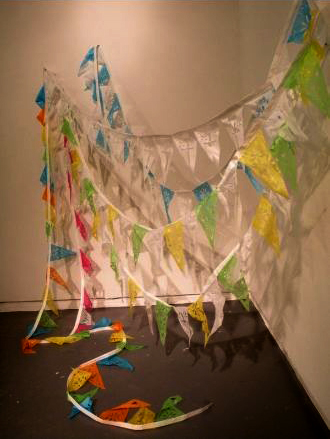 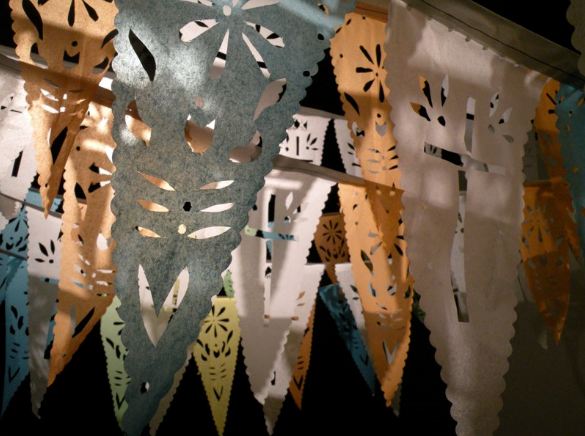 In a text-based sculpture, Galvan materially illustrates the Emiliano Zapato quote “La tierra es de quien la trabaja” or  “the land belongs to he who works it,” as well as the labor that first generation immigrants do in our country. This Land Was Made was made possible by Galvan asking Tony Mejia at Chandelier Experts to teach him enough wiring skills to make his multiple statements; referencing religious imagery in the Catholic tradition and electricity lines as conduits between communities. Galvan’s mode of working still aims to use what his dad taught him and to reflect the experience of arriving with nothing but the ability to learn and the sharing of processes.

Jorge Galvan, "This Land Was Made" 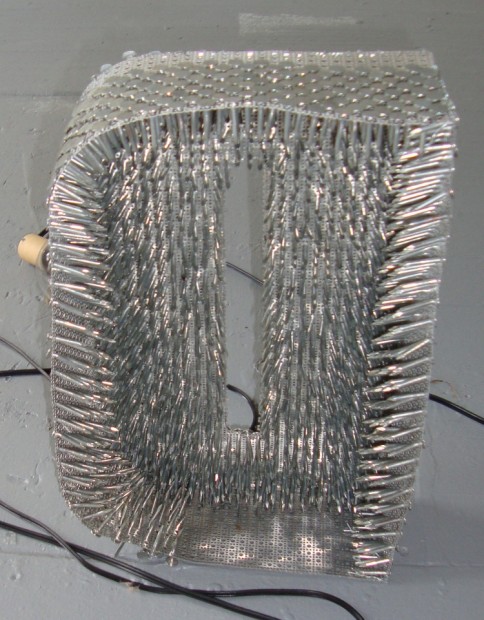 Jorge Galvan, "This Land Was Made," detail 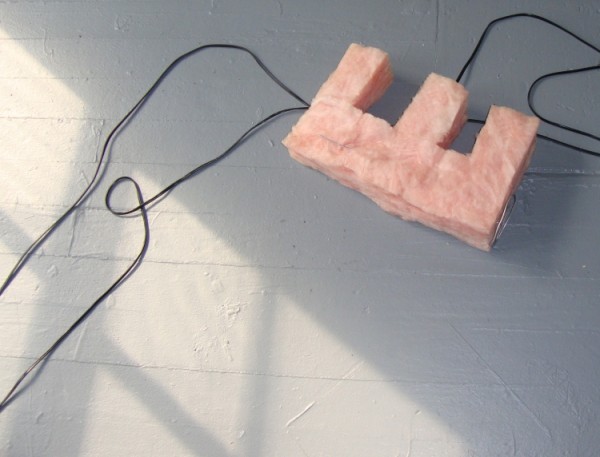 Jorge Galvan, "This Land Was Made," detail

So, if you’re as intrigued as I am each time I see one of Galvan’s works, you’ll be happy to know that I only touched on a few. There are more too see, as well as a compelling new video he is making in collaboration with Sapphire Williams and Alberto Ortiz.

EXU on Sale for Half Price!

Only since you asked, I will comment! As I thought from what you said, I think Orozco is only slighty related. His humor and politcal content is way more subtle which makes for artworks that can be experienced in many different ways. I think using politcal and other ideas to generate an artwork that has aesthtic value beyond the idea is preferable to using art as a soapbox.
Still, I would say the covered police car is beautiful play on Orozco’s “Until you find another Yellow Schwalbe” project in Berlin.

Galvan also seems to have more of a pop aesthetic (and I love most non-Robert Indiana pop art) rather than Orozco’ subtle, elegant aesthetic that seems to tie all his work together.
While Orzoco’s work has plenty of humor it seems like the place Mexican culture has in his work is not humorous and not really addressing pop culture at any point but a wider idea of Mexico.
In any case, the work looks great and I look forward to seeing it in person.