Dore Ashton talks with Michael Corris in the 360 Speaker Series 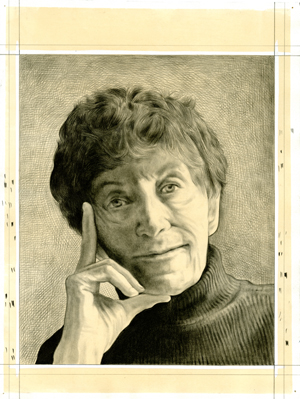 Portrait of Dore Ashton, pencil on paper, by Phong Bui

Last night I attended the 360 Speaker Series at the Nasher Sculpture Center featuring SMU Art Chair Michael Corris in conversation with famed art critic and author Dore Ashton. I left feeling so energized. Ashton is a gifted storyteller. In relating her experiences with the Abstract Expressionist painters of the 50’s, she made art history come alive. Corris framed his questions within the context of the artist in the studio, artist on stage and artist on the street. A few times Ashton tried to derail him. At one point she asked him to define relational aesthetics. I think her exact words were, “What in the world is that?” After he explained it, she exclaimed, “Couldn’t they come up with a better name than that?”

As a young female art critic fresh out of Harvard, Corris asked Ashton how she faired in the male-dominated art world. She responded wryly that she never noticed—no one ever treated her differently. I’m not sure I believe that, but it is likely that Ashton never took it personally. For someone who is small in stature, she has a formidable presence, commanding a lot of respect. Corris admitted that she was the only person ever allowed to smoke in his car. 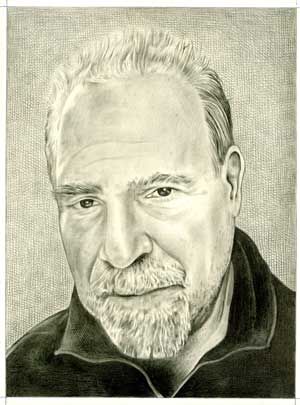 Portrait of Michael Corris, pencil on paper, by Phong Bui

One of the more memorable stories involved Willem De Kooning. She relates that De Kooning was quite a drinker. One day she found him drunk on the steps of his apartment building, so she hoisted him up and helped him into his apartment. Slurring his words, he called her a BITS. Laughing she told the audience that he was so drunk he couldn’t say BITCH. She then said he was right. She was a bitch. Here was this well-established painter whose work she deeply respected and who was she? Some young critic who thought she had the authority to write about his work. She said that they never spoke of the incident and later became good friends.

Another funny story involved Joseph Beuys. When asked what she thought of Beuy’s work, Ashton responded that she wasn’t interested in someone who needed a trademark. She referred to him as a pied piper who pranced around in his vest with people following him. A big DISS to Mr. Beuys.

When asked why she writes, Ashton responded that she has an innate desire to communicate her experience with art “out loud”. She has to look at it on the page in order to get it off her chest. Writing is a way to understand and clarify the art experience.

Ashton presented such a fresh perspective. So often art criticism is snarky and mean-spirited. The rest of the world doesn’t care about art and artists, so why shouldn’t we be the ones to champion artists whose work deserves to be championed? That doesn’t mean that the art writing will lack criticality—Ashton is a testament to that. In thinking about my own writing, when my time is so limited, why would I want to waste it writing about work I don’t care about?