Will Lamson’s Action for the Paiva at Marty Walker Gallery 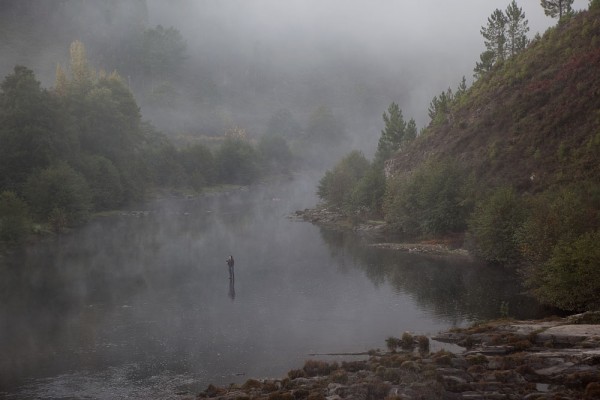 “Patience is bitter, but its fruit is sweet.” — Jean Jacques Rousseau

Last week, I spent a wholly enraptured twenty-five minutes at Marty Walker Gallery watching the figure of artist Will Lamson eek his way across the surface of Portugal’s Paiva River, like Jesus or some enlightened shaman, in his latest film, called Action for the Paiva (2010). The camera watches Lamson from an embankment looking out at a slight penisula at a bend in the river, and the scene looks like an idyllic Hudson River School concoction, complete with the reds and deep greens of nature and a somnolent, creeping fog. The only sound is that of the birds waking up the morning. The mood is contemplative, with Lamson’s stalk-still figure, off in the distance and slowly coming closer, acting as the meditative focus.

Like many of Lamson’s previous films, very little happens in the Paiva film. While Lamson’s figure draws a line through the water with his body at a pace that’s as slow and undetectable as the turning of the Earth, the day unfolds around him: the sun rises higher and shifts nature’s colors; a fog rolls in, obscuring the view; fish touch the under-surface of the water, causing ripples; birds call out songs. All through the subtle shift in time, Lamson’s incongruous, confident human figure, feet flush with the water, remains the focus, confounding us with its impossible course. Watching the film, you struggle to imagine what sort of apparatus would allow a full grown man to effortlessly glide across the surface of water without moving his body. And while you feel ready to consign it all to wizardry, you know that some technology is involved, some mechanization beneath the surface that creates the grand illusion.

That tension between nature and humanity through technology is present in all of Lamson’s work, but Action for the Paiva is the first piece, if my memory serves me, that hides the apparatus used to act out the narrative. In other words, it’s the first time where Lamson allows the conflict between man and nature to be muted and tame, creating the illusion that man has somehow mastered his surroundings. But if you know Lamson’s work, you know that that  is never his stance — always he aims to convey the endless struggle between creation and invention, and the odds usually favor nature, as damn hard as a body tries to defeat it.  By all accounts, this Paiva film, in keeping the human/nature conflict hidden, allows for a viewer to marvel at the artist’s mad-scientist, shamanistic powers over water and gravity and think that at last Lamson has scored a point for humankind.  But through the course of the film, as Lamson’s figure gets closer and closer to the camera (though he’s still some distance away), you begin to notice that he is not, in fact, standing perfectly still or looking straight ahead, unfazed by the beauty all around him. You notice that he’s working some small tool in his hand, ostensibly to move him forward, as he looks side to side, taking the world in while he focuses on his task at staying “afloat.” Eventually, though he nearly reaches the shore, his body slowly turns back in the direction from which it came, making Lamson’s course through the river end where it began — back near the center of the river, disconnected from the land, not so much adrift as stranded in a continuous loop of progression and regression.

The narrative, and its setting in this pastoral landscape, recalls the painting series The Course of Empire  by the eminent Hudson River School painter, Thomas Cole, which tracks the birth, thriving and eventual dissolution of an imaginary empire. Lamson has set up a live-action metaphor for Cole’s romantic theme, one that trumps sentimentality and sweeping grandeur, favoring instead a patient and humble pace — one rife with unseen conflict masked in beauty and guided by Lamson’s poetic vision that, for all its quietude here, clamorously triumphs.

Lucia-thank you for this incredibly spot-on review of the work. I’d like to add this link to Will’s artist lecture at the Indianapolis Museum of Art last spring that discusses his transition from the studio into collaborations with nature in landscape. Action for Paiva provided inspiration for Will’s installation Divining Meteorology at the IMA. A great primer into Lamsons’s work from the last 4 years. http://www.artbabble.org/video/ima/william-lamson-artist-talk