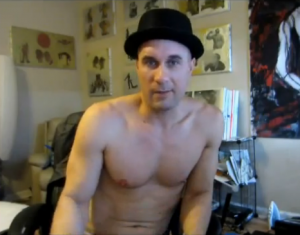 Devon Britt-Darby, né Douglas Britt, one time art and society writer for the Houston Chronicle (he describes his status with the paper as “currently unclear”), after marrying art publicist Reese Darby has embarked in earnest on a career in provocative performance art with the launch of a new blog, reliablenarratives.com. The first post, “Graffiti Bombing, then Shopping, at Art Palace” merges street art with a more traditional gallery interview.

A second, longer video, “Ho on the Go” outlines Britt-Darby’s transformation: the ten minute narration begins with his ups and down with the Chronicle over coverage of his art-marriage, reveals his dramatic past as a sex-worker, a crystal meth addict, and a mental patient, and ends with a cliffhanger: will they fire him? Describing himself as someone with “nothing to lose,” Britt Darby asks for an extended leave of absence from his Chronicle job, in order to “open up dialogs that have been crammed shut,” naming names of powerful people in the Houston art world whose names he says were censored from his Chronicle piece.

According to Britt-Darby, “Being Devon was and is a work of art; it’s in progress, and it’s getting better, I hope”

I guess it’s not only the rich who are more interesting than you and I.

[…] divorce are finalized. The simplest way to address the naming confusion is as Davenport did, in a Glasstire post whose headline, like Connelly’s also suggested I’m currently on meth — by calling […]