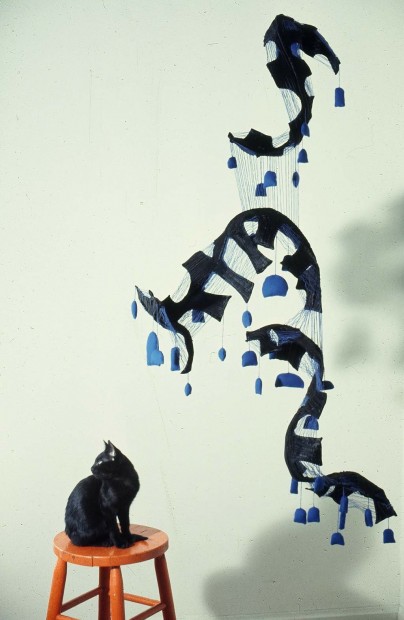 I went home to Iowa for Thanksgiving and between eating amazing food (my Dad is the most terrific cook ever), meeting old friends’ new babies, and writing bits of my dissertation, I did a studio visit with local fiber artist, Priscilla Sage. In the chapter I’m writing currently, I’m focusing on the 1970s multi-channel video installations of Beryl Korot, an artist who often edited her videos based on the weft and the weave of her loom practice. It was natural that I investigate fiber arts of the 1970s and even more natural to talk with Sage, a close friend of my family for years. After all, I grew up amidst her soft mobiles of twirling color. 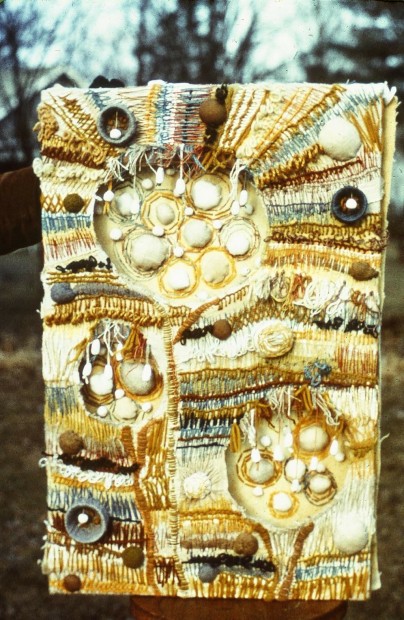 As a young artist in the 1960s, Sage decided to leave painting to experiment with fiber. In her early works she uses organic materials to investigate abstraction. She builds the composition through hand stitched lines of yarn or pillow-like circular forms that interact with found objects that dangle off the fabric. It was the 3-dimensional aspects of building sculptures in something so malleable as fabric that most appealed to Sage: “Fabric allowed for us all to break away from the traditional rectangle.” 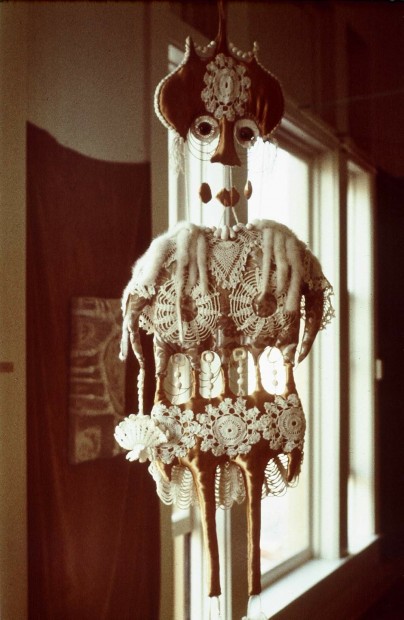 Sage moved  from New York to Ames, Iowa in the early 1960s and later in her career taught at Iowa State and Drake University. While she missed New York she also believed that, “If my work was good, it was going to be good anywhere.” New to Iowa, Sage dedicated almost all of her time to creating experimental forms in fiber. “I was isolated in Ames, in a way. But this allowed me to work. I really spent all day, every day, doing my work.” Sage has since held exhibitions throughout the country. 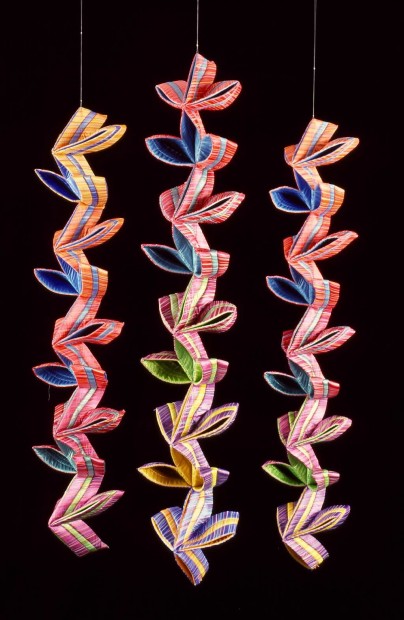 Decades later, inspired by trips to Japan, Sage began incorporating orgamai motifs as well as Japanese paper within her sculptures. The form of her works, she explains, are subordinate to the color. To allow for the play of design, Sage first makes a small paper model of the work. Once she has a sketch of the form in mind, she creates another large paper model to scale. Next, she makes the work in white fabric. It is in the last stages of creation that she brings in the dyed metallic fabric, now sewed using a sewing machine. She likes this fabric for its reflective quality and it has become a hallmark of her mid-career work. 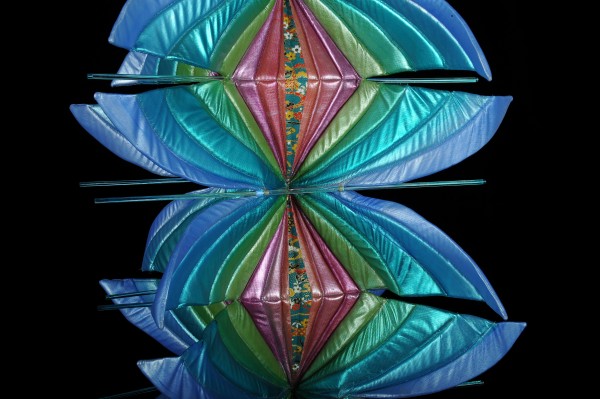 “I love multiples,” Sage states. And in a recent tryptich of sculpture, she repeated floral forms one after the other, punctured by the plastic lines of the rods that hold the work together. This work currently hangs in the foyer of her home, across from a chair she always reads in. “I like to look up and see the work, to see it change as it moves and responds to the light in the room.” She is also always thinking about the next project. “Here I am at this age,” she says. “Still worrying about the next idea.”