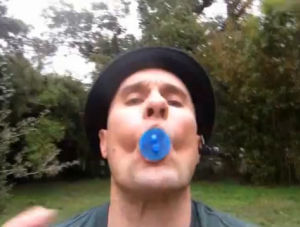 Houston Chronicle art Critic and “Art Guys Marry a Plant” dissenter Douglas Britt-Darby has a posted a new YouTube video. Filmed on Thanksgiving day, the video, titled “Dario Robleto Knew Nothing About This,” (changed from the original title this morning, “The Art Guys vs. Dario Robleto”) shows a breathless and muttering   Britt-Darby performing a ritual action at the site of “The Art Guys Marry A Plant” at the Menil Collection in Houston.

Britt-Darby has shaved his head, and scatters a Dario-Robleto-style alchemical mixture of hair clippings and “million year old blossoms” around the sapling, declaring, in mock-wedding style that “by the power vested in me (I am still currently employed as a Houston Chronicle art critic), I declare that this fucking piece sucks” then sucks on a candy ring-pop, flings it at the base of the tree, then places it on one of the tree’s branches.

The last name is Britt-Darby, thank you very much, Mr. Davenport. Please show little respect for the wife of one of your collectors (I bought two of your painted bottles at the second fair), please?

Noted, with apologies, Mr. Britt-Darby. But would you prefer Douglas or Devon?

Devon. I’d also prefer members of the media try treating my wife like the equal partner in this marriage. She’s no tree; she’s my wife, Reese Darby.

What’s the ETA on fixing that headline, Bill?

Thanks, Kelly. I should have gone to you in the first place. Heh.

Yeah, since I apparently uncorrected all of Bill’s corrections! Sorry! Note to self: do not try to “fix” things on site when surrounded by small children and house guests…