When I wrote about the show of Qui Anxiong’s animated films at the Crow Collection for a kids’ blog yesterday, I began with a disclaimer about the sometimes mature themes in the films and how some parents may not be jazzed about their littles watching allegorical warfare and the toxins of contemporary consumption play out in beautiful metaphor on screen. Of course, it’s exactly what I think kids should see, and so should everyone else.

Anxiong’s haunting work here — two stop animation films that span walls three projector screen widths wide — spins painterly tales of our current state in the world, tracking time before 9/11 till now in the first film, and, in the second film, telling the ghastly story of manufactured food commodity, poor environmental stewardship, and science gone kooky. Breaking it down like that is an over-simplification, though, because while those themes are fairly overt, Anxiong’s imagination acts upon them with a wizardry that never allows for a neat reduction of any of them. 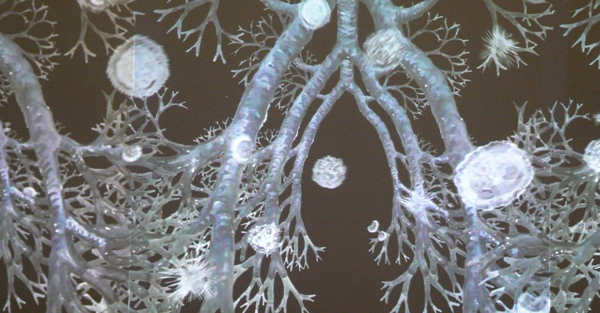 In keeping with the personificating traditions of animation, Anxiong populates his tales with beasts and creatures that stand in for armies or machines, and battles are waged with a detachment that makes them magical and other-worldly, though there is a palpable feeling of dread. Throughout the films, images weave together into complex lattices of meaning in ways that can be lyrical and wondrous, skirting and embracing loaded topics with grace, even though Anxiong sometimes falls for the temptation of heavy-handedness (the chicken-extruding machine in the film upstairs is one such face-konk). But as a whole, there is deep pleasure in watching these films. They act as a reminder that art has the unique role of being passively confrontational, kicking us in the pants with sweepingly gorgeous provocation. 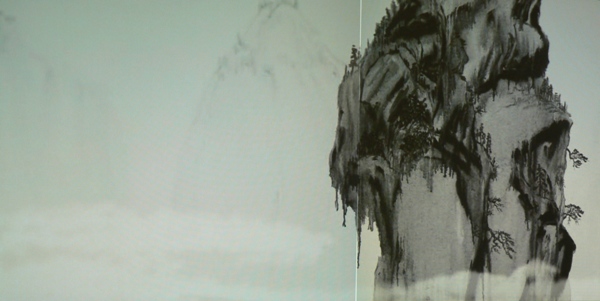