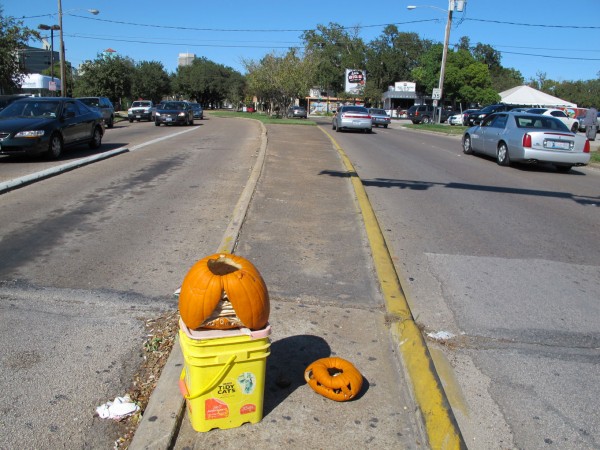 The new permanent installation at Montrose’s busiest intersection, Montrose and Westheimer, is a laudable example of public art that truly reflects the ethos of its surroundings as well as trends in contemporary art.

“Untitled” consists of two jack-o’-lanterns situated at the tip of a median. One balances atop a bucket of Tidy Cats cat litter, while the other makes direct contact with the street level, (see Rodin’s “Burghers of Calais”). Pulling materials from the world around him, this artist has gifted Montrose with a time-based readymade that recalls Duchamp’s “Bicycle Wheel.” “Untitled” first appeared on the scene on the night of Halloween. Since that time we have watched this work evolve and evoke questions of decay, mass ritual, and urban life. On a formal level, elements of the work pull together the street’s color scheme of yellow road lines, turn signal lights, and Valero gold, while the rotting and dehydrating innards of the jack-o’-lanterns are slowly metamorphosing to match the concrete’s surface itself. In its original edition it also contained a cowboy hat atop the big pumpkin, but as the artist intended audience participation and generosity to the viewer, a collaborator has since contributed to the meaning of the work by removing the hat.

This thoughtful artist remains anonymous although we know they must be well acquainted with contemporary trends of intervention and abdication of authorship, and be particularly inspired by the work of Dieter Roth. Although the work is both conceptually and formally cohesive, it allows for a variety of possible readings while still reminding us of the inescapable cycle of life, death, and decay. 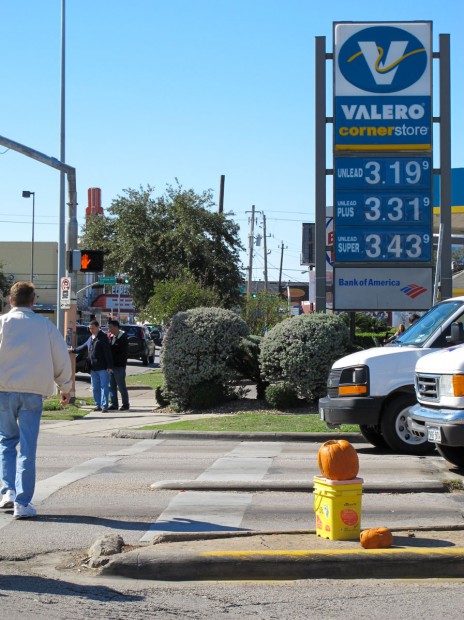 [Just in, pre-theft and decay photos of the work…] 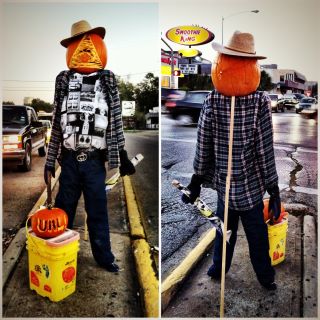 Carrie, the ironic, pseudo-artspeak tone of your piece lessens it. The tidy cat jack-o-lantern IS art, IS interesting, and DOES speak about our shared urban experience. Your tone implies that it does not, and you are reviewing an insignificant bit of street trash with ironic humor. Given your work with Hear Our Houston, I know you don’t really think this.

I don’t know, Bill, I think you are being a little hard on Carrie. I read it as both ironic and serious at the same time, acknowledging the role of the unexpected but trying to avoid pontificating about it by going hyperbolic?

So, given the the fact that this is the residue of the original work noted in the first response [http://www.flickr.com/photos/dualstreets/6304482480/in/photostream], I read these words as the author having her tongue firmly planted in her cheek.

I also read it as ironic and serious at the same time. I don’t think she’s attacking the art with her playful approach, I think she’s conscious about the pitfalls of an imagined art critical attempt to dignify it, i.e. she’s playing with what an article about this kind of art might look like or sound like.

Also, this comment passed along from Carrie, “Coolidge thinks it’d ‘be funny if the city showed up and painted it all grey'”.

Passed along from the sneaky smart DUAL, who I got to meet this weekend:
“Ha, too funny. Didnt really think it would get as much attention as it did but here goes… my girlfriend and I carved the pumpkins the night before and were gonna give em to DOMY to display but that never happened. So I woke up Halloween morning with the vision of a scarecrow… Didnt take me long to decide his location, my favorite intersection in Houston! After getting together an old easel, $7 for thrift store jeans and gloves, an old gucci belt, some prints i had laying around, a shirt stolen from my girlfriends closet and an old wheatpasting bucket, he was born. I set him up round 8pm that night and was surprised to see the response the following morning. And how he slowly disappeared, well kinda….= I’m really stoked it had the impact it did. Especially since all i wanted was a purpose for the damn pumpkins we’d carved the night before! thanks a bunch for your support and for writing bout it.”