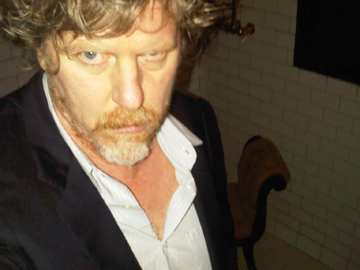 You’ve by now heard tell of how this year’s TWO x TWO guest of honor, the artist Mark Grotjahn, got all perschnickered on art-party libations, stumbled off scene just before his painting went on the auction block to sell for a cool one million, as a golden-robed Patti LaBelle belted out “Voulez-vous couchez avec moi.” He swaggered up the long Rachofsky driveway, out through the metal gates, and landed on a small patch of grass on the side of Preston Road where he passed out, only after cursing out an assistant who was beleaguered, no doubt, from trying to keep wild Grotjahn safely caged within the eminent Rachofsky art compound. Thankfully, a Dallas Morning News society reporter, Allan Peppard, was on hand to capture the scene on his phone’s camera, demonstrating why it is that journalists are politely not encouraged to attend TWO x TWO (though they can purchase a ticket at someone’s table), and thus forever securing himself as a hero to all of us on this side of the fence. Cheers, Mr. Peppard! I heartily toast you with my canned Lone Star.

The upswing of TWO x TWO’s legendary debauchery (besides witnessing art stars knoodle beds of clover) is, of course, all the money that’s raised  for AIDS research and for the DMA to grow its contemporary art collection. This year, the auction set a record: $4.8 million raised from the auctioning of donated work from artists and galleries across the world. Fantastic! All that moolah is a good thing, even though the hangovers likely aren’t.

Participating in TWO x TWO is important for everyone involved — artists, dealers, advisors, the whole complicated art market food chain. Many of Dallas best galleries give work to the auction, as it behooves them to do, considering the auction brings all those important eyes in front of their artists’ work and their gallery’s name. And then there’s the whole spirit of comradery, this-is-our-city, Dallas-has-good-art-I-swear thing that encourages Dallas galleries to participate — in other words, galleries have a really wonderful chance of acting as ambassadors for Dallas to the throngs of people from Art Elsewhere that go to TWO x TWO. I daresay, it must be a lot of pressure, considering the expectations out-of-towners might place upon Dallas’ art scene since art patrons like Howard Rachofsky live here and bring everyone in the Art World down here for such a huge brouhaha. I imagine it’d feel pretty cool to be from here, showing work from your gallery at the auction, backing up Big D, representing. It must be a few really proud days for Dallas gallerists.

Well, everyone that went to TWO x TWO this year, and every gallerist that participated, was given the Fall issue of Whitewall Magazine, via mail or gift bag, that features an interview with Howard and Cindy Rachofsky about TWO x TWO. In it, the Rachofsky’s are asked if there are any groups of Dallas artists or Texas artists that the couple feels “an obligation to support.” Here’s how the Rachofskies answered:

Howard: Not so much. I don’t want to say it’s a sensitive subject, but —

Cindy: I think other communities would say the same thing, it’s sensitive in all communities. You want to be supportive. We have local artists in the collection, absolutely — we try to support the local gallery scene and go to the openings and things like that — but I don’t think Dallas has an incredibly vibrant gallery scene. We wish it had a better scene.

HR: It’s been growing some, but not significantly. It has not evolved in the way the collective art community has.

Certainly,we all struggle with the limits or shortfalls of Dallas’ art scene, as we’ve hashed out here in this Glasstire space quite often. But always, always, any question of the viability and health of Dallas’ gallery scene comes back to the collectors themselves, and whether or not they support and allow, through their patronage, for a vibrant scene. When I suggested last month that galleries could be more daring to help foster a richer eco-system, it was suggested in the comments, more than once, that Dallas collectors wouldn’t go for such a thing, and that until collectors do, galleries can’t venture into more challenging terrain.

What Dallas art community is thriving, and why isn’t it necessarily overflowing onto the gallery scene? And what should be done, those of you within that “collective art community,” to inject Dallas with the vibrancy that wouldn’t make our most important collectors feel compelled to hand out a very polite take-down of that local gallery scene to their esteemed guests and generous art donators, including those from their own hometown?

What does a vibrant “scene” even look like? I’d ask Mark Grotjahn, but I don’t think he remembers.

Glad you asked about that “collective art community”. Maybe it’s the collectors, artists, curators and dealers who can afford to zoom around the globe took look at art and rub shoulders with one another, from New York to Dubai to Sao Paolo to London to Shanghai. Vibrant AND evolved.

Thank you for the article. While reading it, particularly the Rachofsky interview, I hear what sounds like an opportunity. If the traditional means for funding, a wealthy patron, isn’t working we have to find an alternative way to make work and exhibitions of the highest caliber.

What we need from local gallerists are people that create rather than convert collectors (see above), and people that work with artists and curators to give those potential collectors, critics, other artists a real reason to get excited about what is happening right here. Artists (myself included) need to think bigger, take risks, and work on a higher level. Art writers have the obligation to make people aware of the assets and shortcomings of our city. This is our challenge.

I think that what Andrew is suggesting makes sense, but is not going to create collectors of the Rachofsky ilk. Mr. Rachofsky and others in the collective art community are not part of the 99-percent of us who comprise the base and much of the midsection of the pyramidal art world. Artists can think bigger (although I hope this ins’t taken literally, as so often seems to be the case) and take more risks, etc. and thus attract potential galleries and patrons.
But keep attendant costs in mind. Does risky, higher-level art need to be higher-priced? Some people need to have art be expensive in order to take it seriously. We all know about the psychology of pricing, but we all also know the people who love artworks but never could afford to buy them. They simply are priced out of the market.
Still, there are plenty of people with disposable income who are not part of the one-percent (I think that, to qualify for that rarified group, you need to net at least $11 million per year) who could afford to buy. Those are the socially liberal professional classes that do buy quite a lot of art, if only because they think it makes an important statement about their sophistication.
But, at the end of the day (as people with money are wont to say), is this conversation only about being a bit edgier?
If creating and supporting art that appeals to a certain patron base (or creates a certain kind of patron base) is why anyone spends time in their studio, well, is that what it really comes down to?

As a gallery who participates in 2×2, I see Cindy and Howard’s contribution to the Dallas art community in the educational programming at the Rachofsky House and the money they raise for the DMA’s contemporary collecting efforts.

For the most part the focus of their collection is blue chip work, which they acquire from major art markets. So if their standard of comparison is high powered New York galleries, then galleries in Dallas are certain to fall short and seem less vibrant. It’s pretty much basic math. In New York, the budgets are bigger, so is the media market, the talent pool, client base etc. Add all of those things up and you get something more impressive. Not to mention that there are WAY MORE galleries in those markets than there are here.

There just aren’t enough buyers in Dallas to support an art scene that can compete with New York, LA, London etc. That doesn’t mean that Dallas galleries can’t hold their own in comparison to galleries in those markets. On an individual basis yes, but comparing market to market there is no chance. I don’t really see that as a negative, it’s simply a numbers game. It’s harder to continually take big risks when you can’t absorb the losses when there is little or no reward.

Great things happen here and we need to focus on that. More people need to get out and support Dallas galleries and their artists and I guarantee that will lead to more ambitious programming and expansion of the market. The Rachofsky’s aren’t going to be among those people (it’s just not their area), but I don’t think that says anything about what Dallas galleries have going on.

I agree completely with Brian…It doesn’t help that we don’t have much media coverage of the visual arts…I loved the good old days when we had two daily newspapers and two full time visual art critics. Everything has been flipped on its head and we’re all learning to figure it out…

People buying locally has been a good mantra for good health as in a good diet…it should be the same with supporting all our Dallas based artists as well, whether they be visual artists, musical artists, theater artists, literary artists, dancers, etc.